Ooda: The Latest Architecture and News

A Healthcare Facility in a Former Mall in United States and a Future-Oriented Zoo in Canada: 8 Unbuilt Projects by Established Firms

This week's curated selection of Best Unbuilt Architecture highlights designs submitted by established architecture practices, featuring conceptual works, competition entries and projects in different stages of development. From the transformation of a former mall into a healthcare facility in the United States, a masterplan for the redevelopment of a zoo in Canada to a brewery regeneration in China, the following explores a variety of designs by global architecture offices.

Featuring firms like Perkins +Will, Henning Larsen Architects, URBANUS or Mandaworks, this week's selection of unbuilt projects highlights worldwide interventions that illustrate a variety of ideas, from adaptive-reuse strategies, interventions in heritage sites and new models for public buildings. 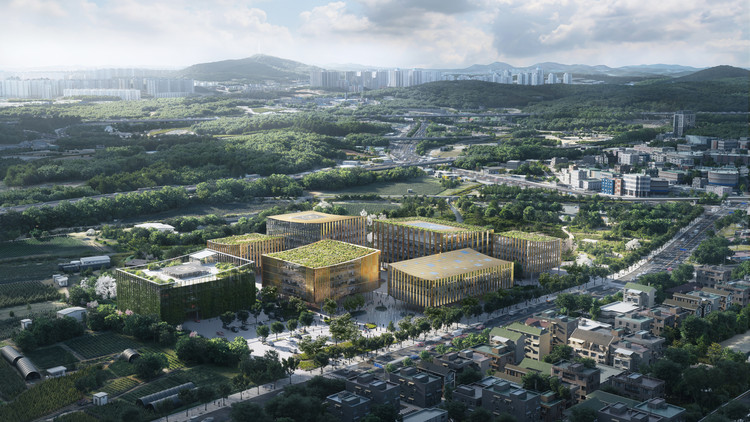 Portugal-based OODA firm has revealed the design of the headquarters of the Portuguese Professional Football League in Oporto. Located in an area marked by discord and urban diversity, the building is a bold statement in this urban environment and will help to develop the adjacent neighborhoods.

The proposal for the Helsinki Central Library by OODA tries to merge the most efficient program articulation with a strong concept which intends to suggest the overall theme integrated with Helsinki’s context. Their building acts as a shifting point between the two demarked city urban networks – ancient and modern – merging both, creating a public path that connects to the park while it simultaneously generates the formal composition. The new central library will be much more than a traditional library. It will be a dynamic entity, fully equipped, comprised of the physical spaces themselves as well as technology, library collections, staff, tourists in an all-age designed forefront building. More images and architects’ description after the break.

For their competition proposal, OODA believes that in the process of generating architecture, they cannot have success without imagination because that is the most efficient tool or possibility to generate scenarios, predict spaces and reinvent ambiances. For this unique equipment, their approach tries to merge the most efficient program articulation with a strong concept which intends to suggest the overall theme integrated with Istanbul’s context. The main program components require a specific connectivity overlap that generates directly a crossed axis of piled interrelated spaces. Then, as a conceptual driven figuration, this formal arrangement suffers the effect of a natural disaster – earthquake – and falls down until achieving its structural stability on the ground creating as well the landscape topography with the same principle. More images and architects’ description after the break.

Architecture is often considered a social art of function adjustment that seeks an implicit idea of permanence and formal consistency. This usually results in a demand for a creation that sustains the progress of time in an attitude of survival and maturation. However, on this intervention by architecture firms FREE and OODA, the building’s integration and urban landscape was based on the awareness of the direct relationship that the site has with works by internationally renowned architects (SANAA and Alcino Soutinho) and in compliance with the heterogeneity of the surrounding urban fabric. Thus, the building assumes its identity but deliberately quiet and in continuity with the pre-existence. More images and architects’ description after the break.

OODA shared with us their proposal for the New Taipei City Museum of Art which won the Merit Award in the international competition. The competition intention was to create a pioneering and innovative design concept which will stand as a new-age landmark and a symbolic voice to the world of Taipei City new spirit. OODA’s concept emerges from a big volumetric cube in confrontation with a smaller inner structure cube – hypercube which is an applied mathematical form that relates both. Then the big outer bisects the clamp (as structural elements) and sucks the in between surfaces to a central point creating a hypercube as the core. More images and architects’ description after the break.

Portuguese architects OODA shared with us their proposal (in collaboration with Lencastre Arquitectos) for the Tram Museum International Competition in Porto, Portugal.