Project description from the architects:

For the new Matadouro (Slaughterhouse) project we are interested in creating a building rooted in local history and memory and to develop a sensory translation of the public space that will belong to everyone while each visitor feels as though the space is their own. During its prosperous years, the former Matadouro Slaughterhouse was considered one of the most important economic and development engines for the Campanhã area, however, in the late 1990s it was closed and has remained virtually unoccupied since. Major developments around the site, such as the FC Porto Stadium or the nearby speedway and heavily trafficked city exit route, separated the complex from the city. The Matadouro was lost and forgotten among the surrounding urban elements. With this proposal, we intend to reactivate, reinvent, and engage the local history and memory of the city. In order to achieve this goal, it is essential to create a structure that will have a strong presence from an afar while also reinventing the square underneath for neighborhood uses and new functions to re-establish the site’s importance in the city’s cultural, business and social network.

The brief required a new bridge to establish a connection to the upper side of the city and metro station, once the site is located at a lower level and isolated by the speedway VCI. This created the opportunity not only to access the site itself but also to the neighborhood living in the south area to access easily other parts of the city.

The site became part of a path and exchange a new anchor to the city.

On the north, the access is made by the building bridge on its top create the uplifted plaza that serves as a public garden and Belvedere for the whole project and the city. And on the South at the level of street and local neighborhood, two other squares would generate another entrance, spots for any social events and interactions.

The Form- One Gesture that Unites

The roof stretches across the entire site to integrate all the program underneath, unite old and new, however preserving the historical heritage. It covers or it integrates with the existing building structures accordingly with the necessity. It establishes a dialogue of scale with the large adjacent infrastructures and, subtly blur through the material with the house of Campanhã.

With a simple gesture of accentuating by the ridge, the specific program underneath is revealed and connected as two front plazas or cultural program (library, museum, performance space etc.) or a new bridge connection with the neighborhood.

The aim for us is to use the knowledge and materials known locally, however, showing their new potential. The ceramic tiles as main covering roof members integrate the new architecture with typical neighborhood appearance and glass panels bring the light, cover from environmental factors as rain or sun or glow with warm light as a lantern the district during the night hours providing a safe cross passage. Further as Porto it renowned of the warm summers with an excessive sun and on contrary the rainy weather during the other time of the year, the new roof appears as a second skin, allows the site to be used all year round ensuring protection and shading, thus enhancing the wind to pass through.

Although it is an innovative design the whole refers to both: local construction but also its form that try to refer to the lightness of the existing big open structures, thus large thin members that levitate weaving as a textile. 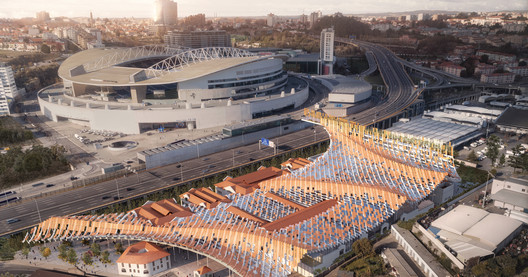