Portugal-based OODA firm has revealed the design of the headquarters of the Portuguese Professional Football League in Oporto. Located in an area marked by discord and urban diversity, the building is a bold statement in this urban environment and will help to develop the adjacent neighborhoods.

It is a project with a strong public character, which will emphasise an area of the city that is sometimes forgotten, through the construction  of an institutional building, which is simultaneously a sport, cultural and leisure facility. However, it sought to boost the use of its spaces,  exterior and interior, as a three-part interface: the public, the surrounding city and the program it contains.

The project evolved in two simple moments: a horizontal, green one; another objectual, white one. The ground floors establish a clear  relationship of continuity with the park on the riverside of Granja. The spaces were designed for public use organized around a new square  and under the green and undulating roof. The rest of the building rises above the horizontal plan in a pure and affirmative way. The building  is aimed for the institutional use of the League and seeks, through the materialization of the façade, the reminiscence of some peculiarities  of the football world.

There is a distinction between the lower horizontal planimetric form of the podium for public uses - such as the auditorium with capacity for  more than 400 people and the first museum of professional competitions - and the upper volume clad in glass for the Portuguese Football  League. Other areas include an ‘High Tech’ football zone, restaurants and shops.

The building is an urban beacon visible day and night, open to the community and connected to the city.

Casa do Futebol is scheduled to open to the public in 2023. 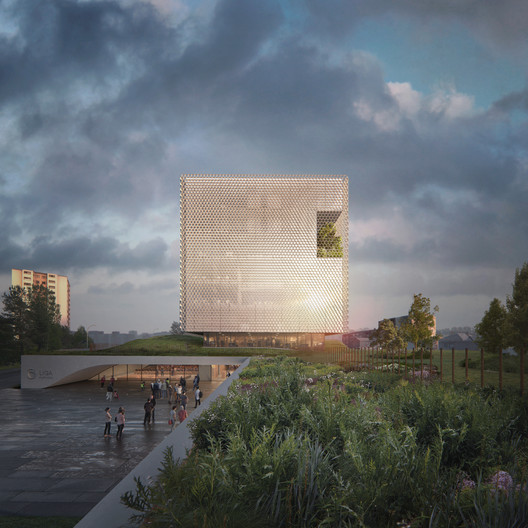