Save
The 30 Most Influential Architects in London
Share
Or
Copy

Founder of Jamie Fobert Architects, Fobert has led many high-profile schemes this year, such as the Kettle Yard gallery extension in Cambridge, the Stirling Prize-shortlisted Tate St Ives, and the remodeling of the National Portrait Gallery.

The world-renowned director of Rogers Stirk Harbour + Partners has been behind many iconic schemes, such as the Pompidou Centre in Paris, the Headquarters of Lloyd’s Bank in London, as well as the city’s Leadenhall Building.

Chipperfield Architects continues to produce eye-catching works around the world, such as the Gridiron building at St. Pancras Square in London, the Musee des Beaux-arts in France, and the Neues Museum restoration in Berlin.

Owusu was an outspoken candidate for the RIBA presidency in 2018, accusing the institution of institutional racism, sexism, and unequal pay.

The world-renowned founder of Foster + Partners is responsible for noted works such as the Hong Kong and Shanghai Bank, the Hearst Tower in New York, and recently won the 2018 Stirling Prize with Bloomberg HQ in London.

The founders of DSDHA have overseen works such as the Corner House and Covert House in London, and the St Anne’s SureStart Centre in Essex.

The director of AL-A is noted for iconic works such as her recent extension at the V&A, and the MAAT in Lisbon.

SODA’s directors have been praised for their refurbishment of the historic Kettners building in Soho, London.

The founders at 6a Architects have overseen works such as the Tree House, and the South London Gallery.

The veteran post-modernist designer’s firm CZWG has produced noted works such as Maggie’s Nottingham, and the Canada Water Library.

The architect and co-founder of ASH (Architects for Social Housing) campaigns to save council estates under threat of demolition. She has designed alternatives to demolition for schemes such as the West Kensington and Gibbs Green estates in Hammersmith & Fulham, the Central Hill estate in Crystal Palace, and has produced designs for the improvements and future of the Patmore estate in Wandsworth, which is run by a housing cooperative.

The chairman of New London Architecture campaigns for high-quality buildings and planning in the city, such as their 100 ideas for solving the city’s housing crisis.

The youngest ever designer of a Serpentine Pavilion, Escobedo has also created schemes in her native Mexico, such as La Tallera in 2010.

The founder of Alison Brooks Architects has been praised for her installation at the Venice Architecture Biennale, while also overseeing major works such as The Smile, and the first high-rise for the Greenwich Peninsula in London.

The founders of Allford Hall Monaghan Morris have been recognized for works such as the Stirling Prize-winning Burntwood School, and the White Collar Factory in London.

The founding partners of Simpson Haugh made their mark on London with the completion of One Blackfriars, and were selected as one of three winning firms for the design of Science Island in Lithuania.

The founder of Hugh Broughton Architects was responsible for the world’s first relocatable research center in Antarctica.

Peter Barber Architects is renowned for innovative social housing schemes, such as the award-winning Holmes Road project for homeless people, and the Cooperative Housing scheme in collaboration with Mark Fairhurst Architects.

The young architect is renowned for pop-up buildings and installations such as the Interactive Winter Olympic Pavilion in South Korea.

The founding director of dRMM won the 2017 Stirling Prize with Hastings Pier, while also responsible for schemes such as Maggie’s Oldham, and the Rundeskogen in Norway.

Eric Parry Architects have been recognized for schemes such as One Undershaft, a 72-story skyscraper set to be the second-tallest in London.

Adjaye Associates have been celebrated for schemes such as the National Museum of African American History and Culture in Washington DC, and the New Ghana National Cathedral in Accra.

Irish-born McLaughlin saw his Sultan Nazrin Shah Centre shortlisted for the 2018 Stirling Prize, with other notable schemes including the Bishop Edward King Chapel, and Burren House.

The tree partners of MUMA architects were shortlisted for the 2018 Stirling Prize with the Storey’s Field Centre and Eddington Nursery in Cambridge, and in 2015 for Whitworth Gallery in Manchester.

The founders of Waugh Thistleton were shortlisted for the 2018 Stirling Prize with the Bushey Cemetery and also designed the world’s largest CLT building in Hackney, London.

Henley Halebrown was shortlisted for the 2018 Stirling Prize with Chadwick Hall, having also designed schemes such as Hackney New School, De Beauvoir Block, and 1-6 Copper Lane.

Famous for his Post-Modern buildings for MI6 and above Embankment Station, Farrell is planning leader for Thames Gateway, Europe’s largest regeneration project.

Heatherwick Studio is celebrated for schemes such as Zeitz MOCAA in Cape Town, the Learning Hub in Singapore, and the Bombay Sapphire Distillery in Laverstoke, UK.

The director of Zaha Hadid Architects continues to oversee the firm’s eye-catching works such as the Morpheus Hotel in Macao, and the UAE Central Hub. 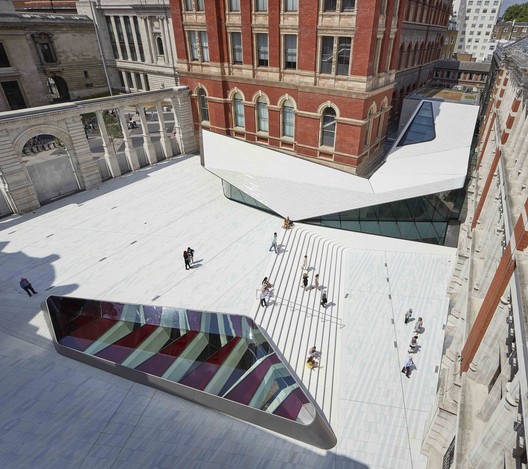