The Stirling Prize is awarded each year to "the building that has made the greatest contribution to the evolution of architecture in the past year." The design of the Burntwood School adds six new faculty buildings and two large cultural buildings to an existing Modernist school designed in the 1950s by Leslie Martin. Speaking at the award, Duncan stated: "Burntwood School shows us how superb school design can be at the heart of raising our children's educational enjoyment and achievement. With the UK facing a huge shortage of school places, it is vital we learn lessons from Burntwood."

"Schools can and should be more than just practical, functional buildings – they need to elevate the aspirations of children, teachers and the wider community," added AHMM Director Paul Monaghan after accepting the award. "Good school design makes a difference to the way students value themselves and their education, and we hope that Burntwood winning the RIBA Stirling Prize shows that this is worth investing in."

The winner came in spite of the BBC People's Choice vote, where The Whitworth by MUMA was victorious, winning 38% of the vote, and ArchDaily's own poll where Heneghan Peng Architects' Greenwich University prevailed, with 32% of the vote (shown below).

At the ceremony, the RIBA also presented the following national awards for 2015: 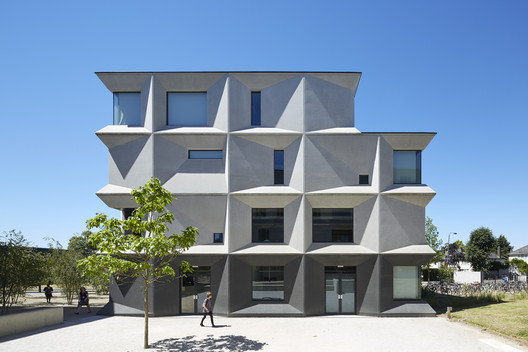