"Bloomberg is a once-in-a-generation project which has pushed the boundaries of research and innovation in architecture," said Sir David Adjaye, this year's RIBA Stirling jury chair. "The design brief called for a building which could rise-up to the challenge of this loaded site and an information-driven environment. The architect worked exhaustively and collaboratively to design a building which perfectly responds to Bloomberg’s ambitions...The real success though is in the experience for staff, visitors or passers-by – how Bloomberg has opened up new spaces to sit and breathe in the City; the visceral impact of the roof-top view across to St Paul’s from the concourse space, the energy of descending the helix ramp or settling into a desk in one of the dynamic new workspaces."

In a statement, Lord Norman Foster said: "...from our first discussions to the final details of the project, Mike Bloomberg and I had a ‘meeting of minds’ on every aspect of the project – its sustainable focus, commitment to innovation and drive to create the best workplace for Bloomberg employees. The RIBA Stirling Prize is a testament to the incredible collaborative spirit that has underpinned the entire project from start to finish."

A highly-innovative new workplace in the City of London, commissioned by an ambitious civic-minded client, which pushes architecture’s boundaries and seeks to enhance the neighboring public realm.

Through the building's form, massing and materials, the HQ was designed as a natural extension of the City that connects to the public realm. Earning a BREEAM Outstanding rating – the highest design-stage score ever achieved by any major office development, the HQ comprises two buildings united by bridges that span over a pedestrian arcade.

The signature façade is defined by a structural sandstone frame with a series of large-scale bronze fins that shade the floor-to-ceiling glazing. The design was made to integrate with the building's natural ventilation system.

Central to Bloomberg’s ethos, the double-height ‘pantry’ on the sixth floor is the heart of the building, reflecting the importance of sharing and collaboration at the company. Everyone passes through this animated space, increasing the likelihood of chance meetings and informal discussions

A breath-taking building, commissioned by the University, for the new community of North-West Cambridge. Inspired by the college cloisters and courts of the City, this project has a sustainability agenda at its core.

An extraordinary spiritual building formed of natural rammed earth walls, oak, and rusted steel, with the beliefs and customs of the Jewish faith at its heart.

An ingenious reconfiguration and extension of the Postmodern art gallery which doubles the exhibition space and creates a new public walkway connecting the town to the beach and helps St.Ives attract a growing number of international visitors.

A floating auditorium crafted from classic Oxford stone and natural oak to blend exquisitely into the established landscape of Worcester College. 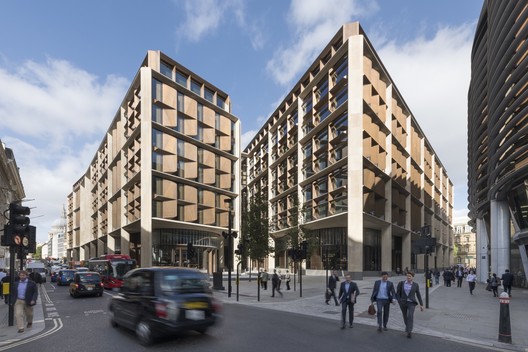