Alison Brooks Architects has revealed designs for their first London highrise as the project receives planning permission. The mixed-use scheme will consist of a cluster of 4 residential towers of varying heights, with co-work and leisure at the ground floor and podium levels, contributing community value to the regeneration of London’s Greenwich Peninsula, the site of Roger Stirk Harbour + Partners’ O2 Arena and a future £1 Billion Mixed-Use Project by Santiago Calatrava. 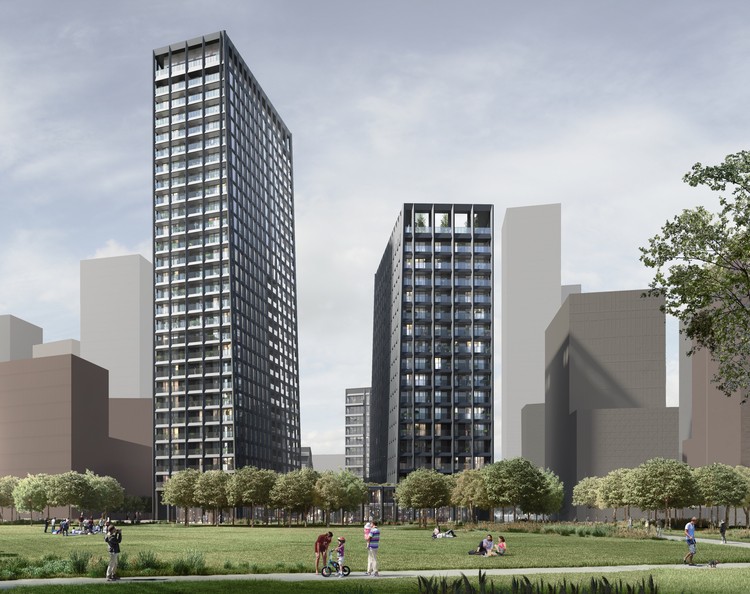 Located along the eastern edge of the site’s Central Park, the new complex will house 400 residential units within four towers, connected at their bases by a colonnaded plinth. Each building will offer 360 degree views, colonnades, roof gardens and co-working spaces. A generous communal garden will sit within the block.

Responding to the curved edge of the park opposite, the four buildings radiate in plan, opening up views and allowing light to permeate the block. The taller of the towers, at 28 and 17 stories, will face directly onto Central Park, while lower buildings of 12 and 5 stories will anchor the northeast end of the site. The entire complex will be clad in a metal lattice evocative of the area’s industrial heritage, such as the gas holders and cast iron clad chimneys of Greenwich Power Station.

The project is the latest announced by London developers Knight Dragon, who are spearheading one of London’s largest single regeneration project on Greenwich Peninsula; 15,720 homes and 12,000 jobs are expected to be created within the new district, which consists of seven neighborhoods masterplanned by Allies and Morrison. Several projects have already been completed, including Marks Barfield Architects’ Greenwich Gateway Pavilions and the Greenwich Peninsula Low Carbon Energy Centre, designed by C.F. Møller Architects.

Alison Brooks commented, “We’re delighted to be working with Knight Dragon and that our designs received unanimous consent from the Royal Borough of Greenwich. Our intention was to create a robust, adaptable urban block with generous  proportions that reinforces the Peninsula’s cosmopolitan identity.” 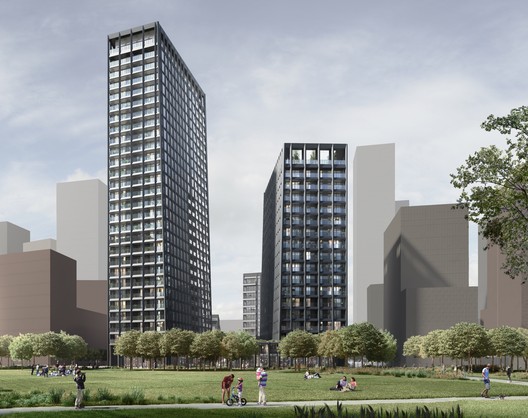