With the touch of a button on your smartphone, your furniture begins to reconfigure while new walls glide into place. In a matter of seconds, your bedroom can become the kitchen, dining room, or simply an empty room thanks to the ingenuity of architecture students at Delft University of Technology's Hyperbody design team. The Pop up Interactive Apartment occupies a mere 50 square metres of multi-use space optimized for specific real-time use, allowing the occupant to choose a configuration based on current needs.

Enter the hyper-efficient world of Pop up Interactive Apartment after the break.

Within the walls of OFL Architecture's open-air wooden pavilion, the term "built environment" truly earns its keep. In Wunderbugs, humans become spectators of the natural world as insects toil away in six spherical ecosystems, and sensors weave movements into a web of data. Upon entering the pavilion, visitors are transformed into components of an interactive soundtrack harvested from the sensors and broadcast in the space, uniting the insect and human experience. The project was conceived for the second annual Maker Faire Europe in Rome, where it was installed earlier this month.

Enter the interactive acoustic experience of Wonderbugs after the break. 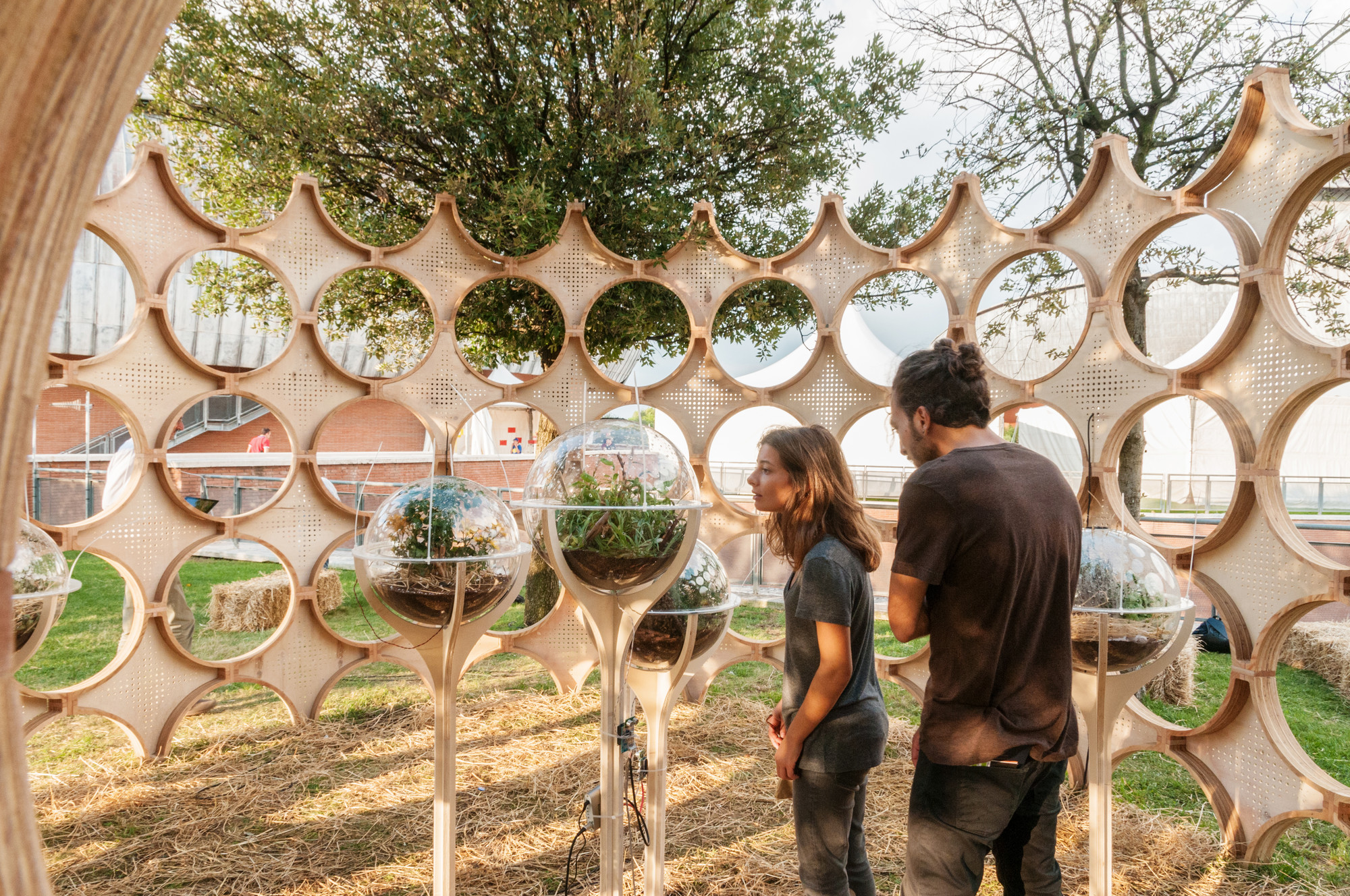 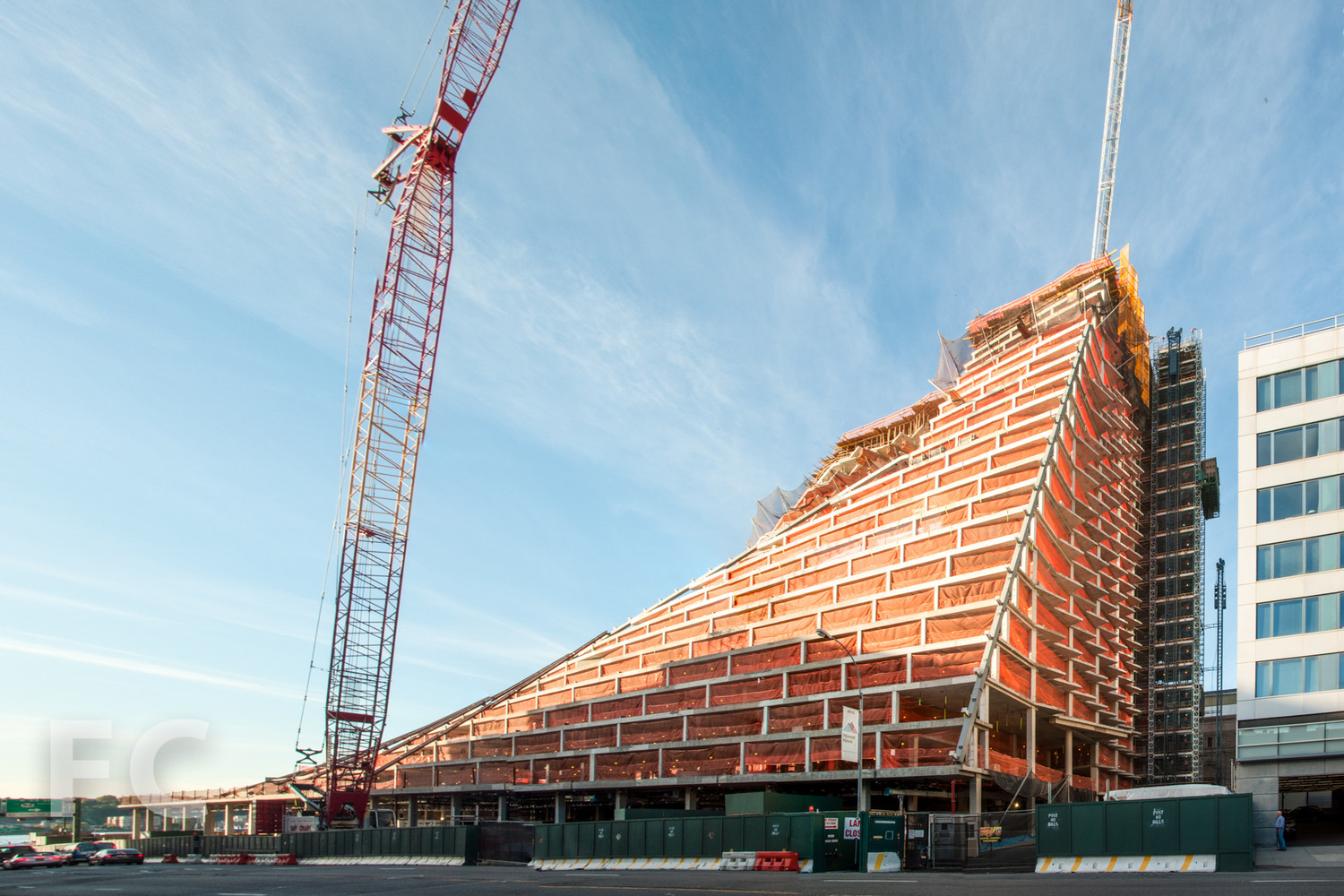 AD Round Up: Canadian Architecture to Be Thankful For

Today marks Canadian Thanksgiving, and to celebrate the occasion we've rounded up some of Canada's best architecture. Our five selections represent five Canadian cities, each with a unique architectural sensibility. We begin in Toronto with the Royal Ontario Museum addition by Studio Daniel Libeskind, a striking intervention using prisms of glass and steel fused to a 102-year-old museum structure; next we go to Montréal for Habitat 67 by Moshe Safdie, an interlocking modular housing project designed for the World Exposition of 1967; to Calgary for Santiago Calatrava's understated Peace Bridge, a stunning glass-encased red lightning bolt spanning the city's widest waterway; then to Winnipeg's Old Market Square Stage by emerging firm 5468796 Architecture, a chameleonic performance space wrapped by a mesh curtain of steel cubes; and finally to the outskirts of Vancouver for the Richmond Olympic Oval, a masterpiece of engineering and the centre of attention during the 2010 Vancouver Winter Olympics. Enjoy, eh.

Women in the Workplace: How Does Architecture Compare?

How do architects stack up against other professions on male/female ratio? Recent data on workers in the United States reveals some compelling information on where women are working - and where men hold sway. Construction work leans heavily male, while research and analyst work is led by women. Where does architecture fit on the scale? See the full infographic showing the percentage of men versus women in architecture after the break.

One thousand nine hundred and ninety: the percentage by which the $3 billion Montreal Olympic Stadium - a project designated only $148 million in 1973 - exceeded its original budget. Ten: the number of years that the Sydney Opera House was over its deadline. Twenty-four: the number of projects included in Monumental Budget Busters, an interactive infographic ranking an array of works - ranging from the International Space Station to the Sochi Olympics - from smallest to largest in cost and time overruns. The list includes infrastructure, architecture, and governmental projects with budget overruns ranging from $210 million to $68 billion. These costs beg the question - does the end justify the means? Find out with the interactive infographic after the break.

Rem Koolhaas and the New Frontline of Transformation

When you abandon the countryside in favour of the city, what do you leave behind? In a recent essay for Icon Magazine, OMA co-founder Rem Koolhaas deliberates on the intersection between the two, arguing that "our current obsession with only the city is highly irresponsible because you cannot understand the city without understanding the countryside."

Did the New World Trade Center Live Up to its Expectations?

The USA's tallest building shoulders one of the nation's greatest challenges: paying tribute to lives lost in one of the country's greatest tragedies. One World Trade Center in lower Manhattan has yet to be completed and yet has still recently been condemned by a number of critics, who cite the former "Freedom Tower" as an inspirational failure. Thirteen years after the attacks, the wider site at ground zero also remains plagued by red tape and bureaucratic delays, unfinished and as-yet-unbuilt World Trade Centers, Calatrava's $5B transit hub, and an absence of reverence, according to critics. Read some of the most potent reviews of the new World Trade Center site from the press in our compilation after the break.

The Architecture of Happy Hour: Plotted, Not Stirred

Frank Gehry, Daniel Libeskind, and Rem Koolhaas walk into a bar. What do they order? CAD Drinks, of course. It's a Singapore Sling like you have never seen before: drawn to scale, in elevation, and divided meticulously by content - ice cubes and orange slice included. Alcoholic drinks are colour coded, inventoried, organized and rendered in this downloadable DWG for Autocad. Architects rejoice: happy hour is that much closer to lunch hour.

The soaring glass roofs of London's Alexandra Palace are about to receive a major overhaul thanks to a £23.8m ($38.6m USD) fundraising project focused on the revitalization of the 139 year old palace. Images of Feilden Clegg Bradley Studios 2014 revitalization are on display for the first time in an exhibition showcasing the upcoming changes to the public palace, including extensive renovations to reopen derelict sections of the building. Find out more about the exhibition after the break.

Tranquility in the Heart of São Paulo: Meet the City's Slender Residential Tower

Nestled in São Paulo's bustling Vila Madalena neighbourhood in Brazil, the slim silhouette of AIR Madalena soars skyward from the street below. The elegant tower will be home to six lofts varying from 100 to 140 square metres, each with an open-air terrace and ample windows to maximize the panoramic views of São Paulo. Designed and built by São Paulo and Paris-based firm Triptyque and realized by the firm's high-end real estate wing IV, the slender building is promised to be completed within 24 months.

Step inside AIR Madalena's elegant lofts after the break 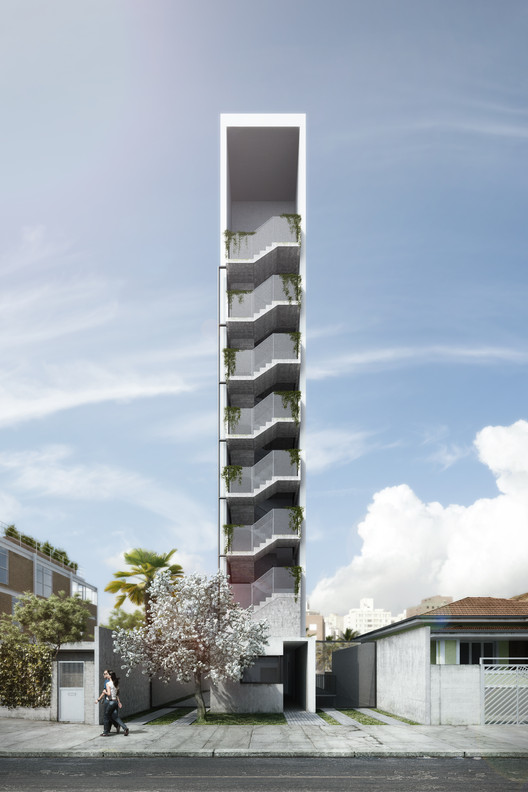 Are You a Card-Carrying Member of the Urban Elite? Find Out With "Cards Against Urbanity"

Architects have been known to dabble in product design, but what about board game design? A team of Washington, D.C.-based architects, urban planners, and designers have come together to create a game with a comedic (yet somewhat serious) take on the nuances of city living. Cards Against Urbanity, a parody on the wildly successful Cards Against Humanity, is simultaneously a critical and satirical game designed to open a dialogue about the development of cities among those who influence them.

Antarctic icebergs morph into a sprawling multi-functional hub for research, transport and accommodation in one of the latest projects to come out of Zaha Hadid's Studio at the University of Applied Arts in Vienna. Designed by architecture student Sergiu-Radu Pop, the project hypothesizes a point of arrival for the world's final frontier of development. The project employs biomimicry as a primary design tool, replicating the jagged asymmetrical edges of ice formations along the coast of the southern ocean. 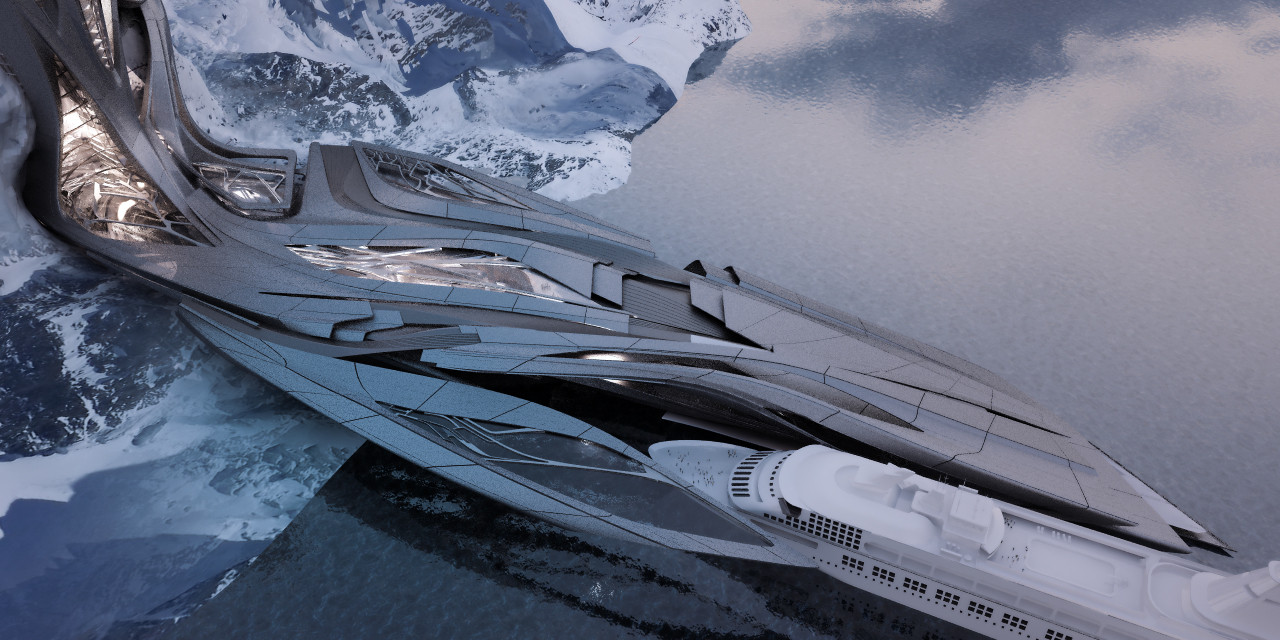 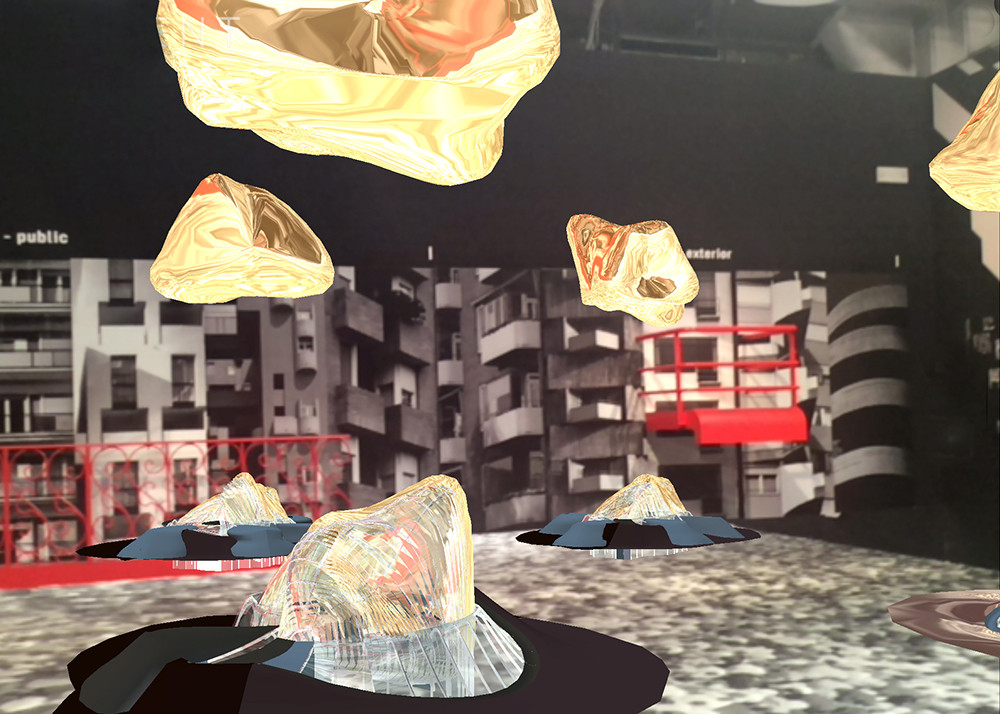 "Architecture is much more than art. And it is by far more than just building buildings" says award winning Burkina Faso architect Diébédo Francis Kéré. In the latest video from Louisiana Channel, Berlin-based Francis Kéré deliberates on the purpose of architecture in a changing society and the influence exerted by his home nation, Burkina Faso. For Kéré, context and medium are key: "I try to use local material: mostly clay and wood, to create buildings that are modern," he says. Kéré's clay modernism represents a new Burkina Faso, using natural and renewable materials as shown in School Library Gando. "If we build with clay we will have a better future, because we will use the resources we have," he adds.

"My people are proud, and that can deliver a lot of energy," says Kéré, optimistic for the future of architecture in Burkina Faso. Watch the video above to find out more about Kéré's approach to his European-based African practice, and read on after the break for ArchDaily's own Interview with Kéré from July.

Get Swinging in Boston on these Glowing LED Hoops 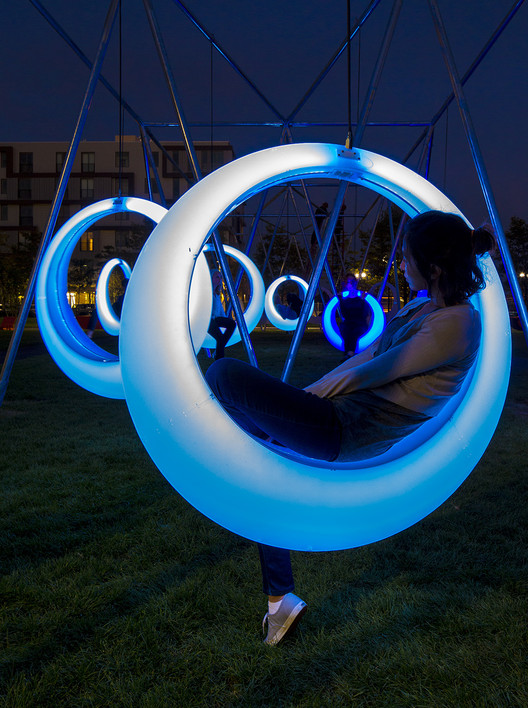 FuturArc, a bimonthly journal that promotes the enhancement of sustainable architecture in Asia, have launched their annual contest to generate ideas for innovative and sustainable design. The contest is split into two, with the FuturArc Prize and the FuturArc Green Leadership Award rewarding sustainable design in both unbuilt and built projects. Read on after the break to find out more about both competitions.

Speaking from the newly-opened Istanbul practice of Copenhagen-based Henning Larsen Architects, Anne Marie Galmstrup describes her scandinavian design process in the context of her role as Principal-in-Charge of projects in Turkey. "Architecture is about space and about interaction between people," Galmstrup says, asking "How does it work here? How is it different in this cultural environment or in that climate?" Galmstrup discusses the atmosphere in Turkey, and how to engage young architects. Henning Larsen has hosted a series of "Imagination Schools," two-week workshops set in the middle east charged with overcoming regional design challenges, and Galmstrup has been instrumental in the orchestration of these and many more projects over her ten year tenure at Henning Larsen.