Prada: The Latest Architecture and News 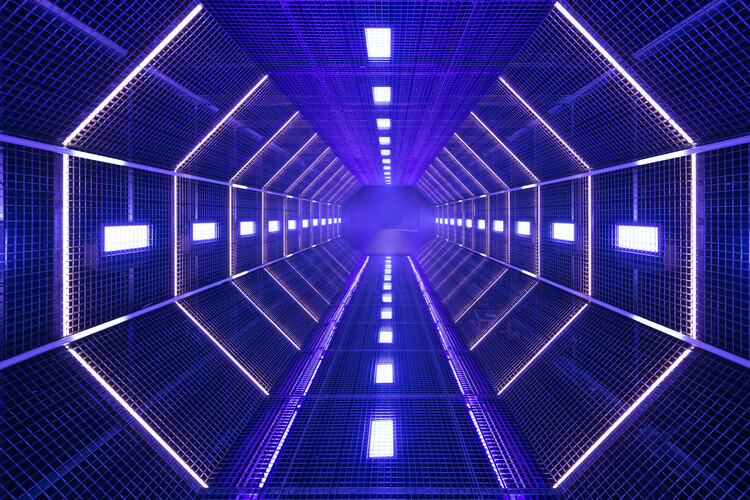 Responding to the challenge of designing a space for the launch of the Prada FW Menswear 2021 Collection by Miuccia Prada and Raf Simons, Rem Koolhaas and AMO have designed four connected geometric rooms that allow for the continuous circulation of the models showcasing their different garments. The general theme of the design centers sensory stimulation. Like the designs presented, the materials used and their distribution throughout the space speak of a more intimate connection with our surroundings, reminding us that fashion and architecture are more than just a functional container; they are an opportunity to actively excite and provoke our senses.

DS+R partner Elizabeth Diller has designed two new pieces for Prada's 2019 spring/summer womenswear collection. Created from Prada nylon as part of the Prada Invites project, the two pieces include a garment bag with utilitarian zippers and buckles and a raincoat that transforms from the same yoke style bag. The yoke style bag was also imagined as a lighter item for women to carry sketchpads, sandwiches and lipstick. The Prada invitation was made to expand the company's fascination with multifaceted representations of contemporary femininity. 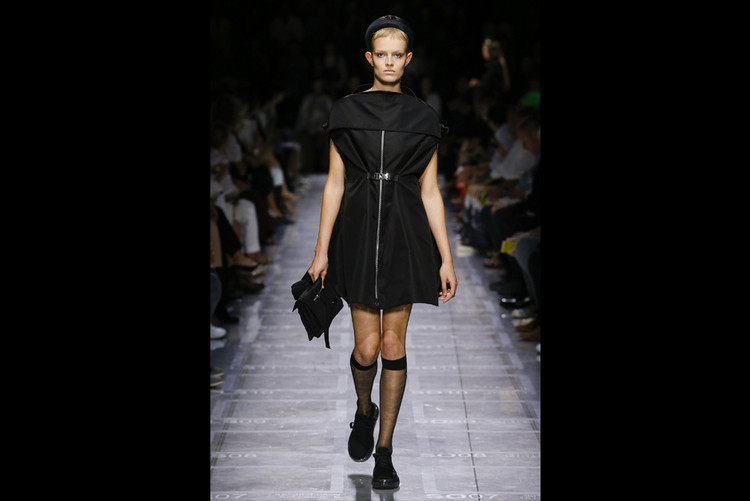 The German Design Council has announced the winners of the Iconic Awards 2018: Innovative Architecture. The awards honor superb examples of interaction between disciplines through an independent architecture and design competition. The Iconic Awards 2018: Innovative Architecture focus on internationally outstanding construction projects, innovative interior and product design as well as compelling communication in an architectural context. The focus is on holistic production and on the interaction between the trades in the context of architecture. 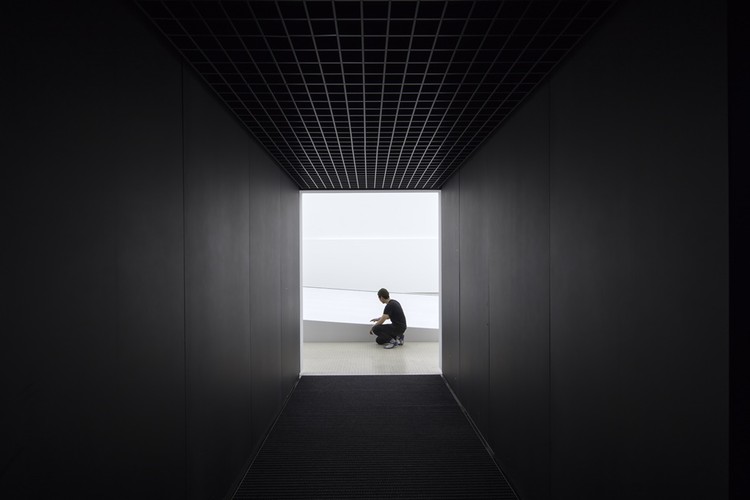 As part of Art Basel in Miami Beach, a modern and contemporary art fair that highlights galleries and the newest developments in the visual arts, Carsten Höller created an installation piece for the Fondazione Prada. The installation, “The Prada Double Club Miami” is only open for a few days as part of Art Basel and is a fully-functioning nightclub. 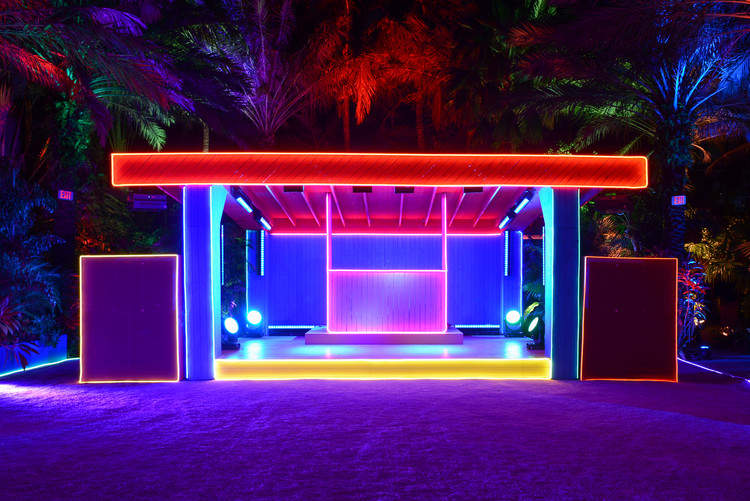 For their latest fashion show scheme for Prada, AMO has gone “back to basics.” Envisioned for the fashion house’s 2017 Fall/Winter Collection, “Continuous Interior” borrows from domestic design, taking the form of a series of curving wooden partitions paired with ordinary materials and emblematic furniture pieces to create a stage that speaks to the importance of authenticity in the political climate of today. 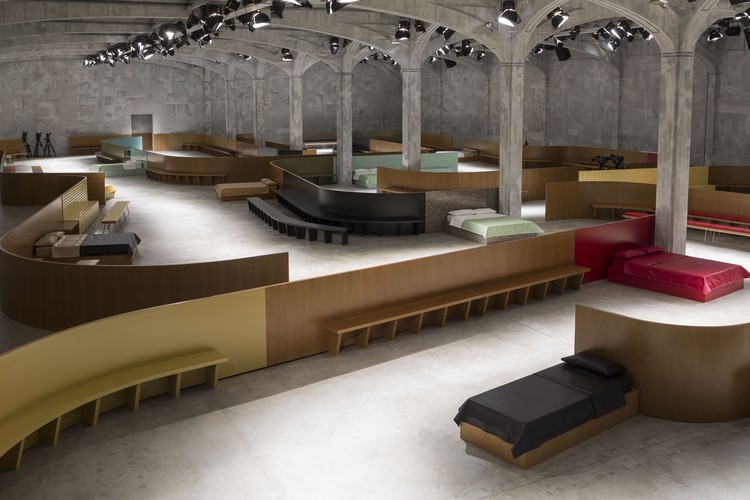 In the latest scenographic set for Prada's fashion collections, AMO have created a set "conceived as a stratification of architectures" – Total Space. Remnants from previous shows sit around the periphery of the room creating a foundation and aesthetic background for the house's 2017 Spring/Summer collection. A linear structure, which sits centrally and divides the room, is designed to "amplify its perceived proportions." 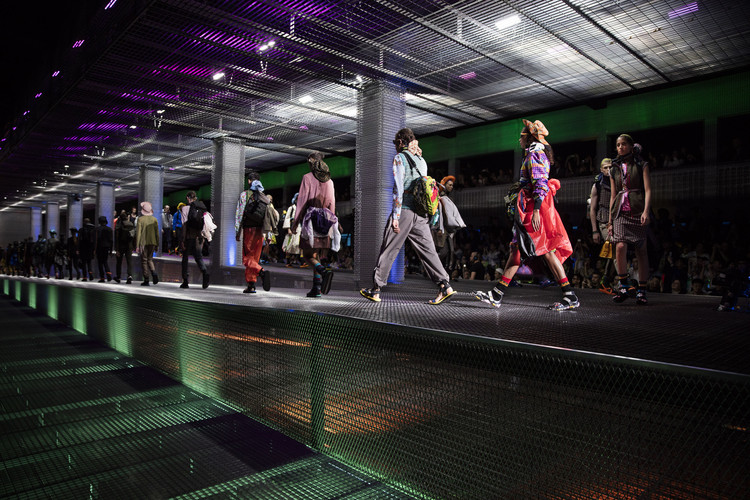 AMO has released the 16th edition of Prada Real Fantasies - a conceptual reinterpretation of the 2016 Spring/Summer Prada collection.

"AMO graphically reinterprets the Indefinite Hangar as a synthetic sunset fixed within a 3 dimensional blank space. The abstract hangar is populated with geometric objects and furniture. Characters move through a neutral scene between the undefined and distilled fragments of daily life. The horizon and scale constantly shifts, manipulating the frame and disrupting a linear sequence: an artificial landscape where fiction and collection collide," says the OMA research studio.

When it comes to the modern-day fashion show, the internet has fundamentally changed the way audiences interact with models and designers, say OMA/AMO, arguing: "The assemblage of recorded impressions and digital reactions inserts itself into the once autonomous narrative of the fashion show. The statement of the collective spreads. The mass of fragmented instant data is uploaded and critiqued by a multitude of voices."

With their latest fashion show design for Prada, which was used to showcase the designer's upcoming fall/winter menswear collection in Milan yesterday, the firm sought to enhance this sense of public judgement. "This consumption of images is like a public trial, a contemporary transposition of the Auto-da-fé," explains their press release, referring to the ceremonies of public penance which took place in the Portuguese and Spanish Inquisitions in the 15th-17th centuries. 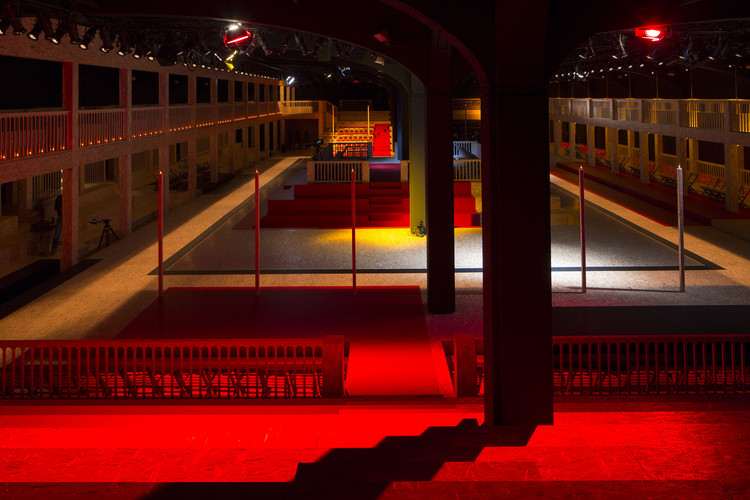 In May, OMA celebrated the opening of Fondazione Prada. Set out to “expand the repertoire of spatial typologies in which art can be exhibited and shared with the public,” the project resulted in an “unusually diverse environment” staged within a historic 20th-century distillery south of Milan’s city center that goes beyond the traditional white museum box. 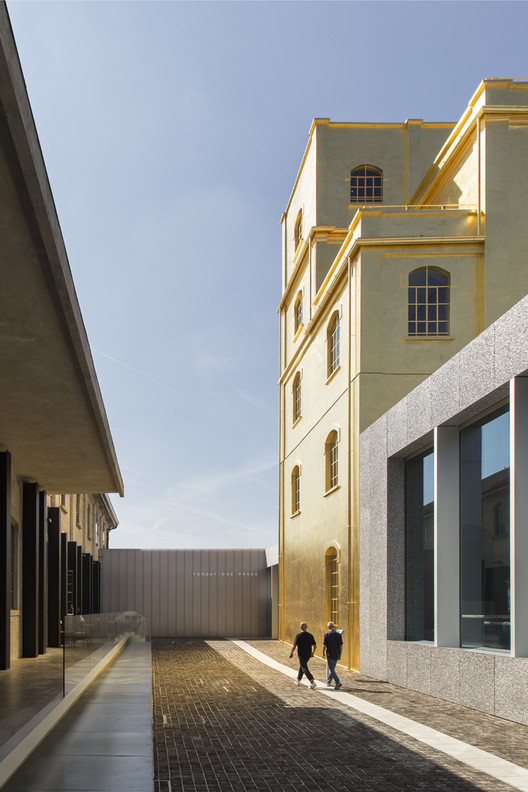 With the opening of the Fondazione Prada art galleries in May, OMA showed a different side to their practice, one focusing on preservation and assemblage rather than the iconography and diagrammatic layout that many associate with the firm. In this interview, originally published by Metropolis Magazine as "Koolhaas Talks Prada," Rem Koolhaas explains the reasoning behind this new approach, and how they attempted to avoid falling into the clichés of post-industrial art spaces.

When the Fondazione Prada opened its doors to a new permanent home in Milan dedicated to contemporary culture, it not only placed the Italian city firmly at the forefront of today’s global art world, but also introduced an ambitious new way of thinking about the relationship between architecture and art. The location—an original 1910 distillery in a distinctly gritty part of the city—comprised seven spaces including warehouses and three enormous brewing cisterns with a raw industrial quality that the architects, Dutch firm OMA, retained while adding three new buildings made of glass, white concrete, and aluminum foam. One, the centrally located Podium, is intended for temporary shows, while another—still under construction—is a nine-story tower that will house the foundation’s archives, art installations, and a restaurant. The third, a theater with a mirrored facade, features folding walls that allow the building to open onto a courtyard. In total, the collection of buildings provides nearly 120,000 square feet of exhibition space, more than twice that of the new Whitney Museum of American Art. Metropolis correspondent Catherine Shaw visited the site with Pritzker Prize–winning architect Rem Koolhaas to find out more about the challenges of creating a new cultural paradigm. 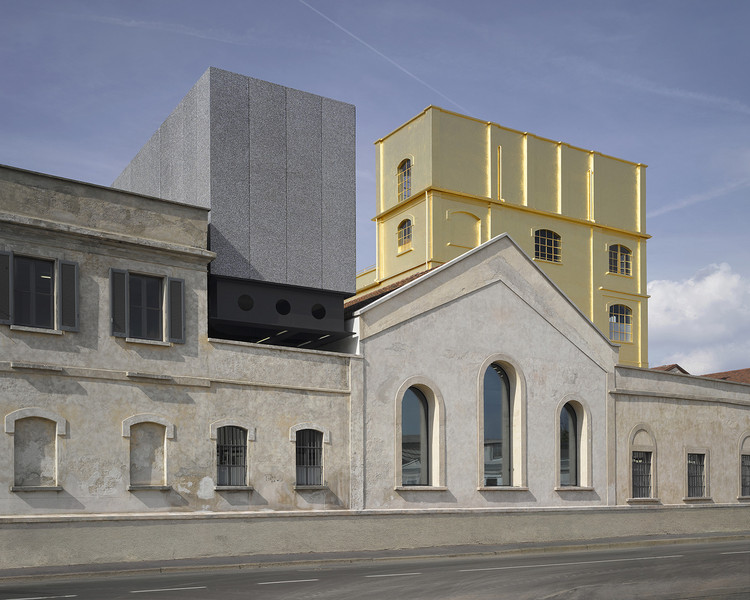 Rem Koolhaas On Preservation, The Fondazione Prada, And Tearing Down Part Of Paris

With the opening of their Fondazione Prada building in Milan at the start of this month, OMA got the chance to show off a skill that they don't get the chance to use very often: preservation. In this interview with Kultur Spiegel, Rem Koolhaas talks at length on the topic, explaining that he believes "we have to preserve history," not just architecture, and arguing that the rise in popularity of reusing old buildings comes from a shift toward comfort, security and sustainability over the ideals of liberty, equality and fraternity. "The dimensions and repertoire of what is worthy of preserving have expanded dramatically," he says, meaning that "we shouldn't tear down buildings that are still usable." Still, he says, that doesn't mean we shouldn't tear down and start again in some cases - an entire Parisian district beyond La Défense, for example. Read the full interview here.

Building up to the May 9 opening of OMA's Fondazione Prada, Italian filmmakers Ila Bêka and Louise Lemoine have released 15-video series that captures the rhythmic and somewhat "transient" nature of the project's last month of construction. Part of a long ongoing relationship between Prada and OMA, the highly anticipated venue will be an "unusually diverse environment" sculpted from a historic 20th-century distillery south of Milan's city center that will be used to exhibit art.

Video: The Construction of AMO's "Infinite Palace" for Prada in a 32-Second Timelapse

Last month, Prada introduced their latest Fall/Winter line not on a catwalk, but in an "Infinite Palace" of disorienting spaces designed by AMO. Continuing the partnership with OMA/AMO that has seen the creation of catwalks, 2009's Prada Transformer and even the soon-to-be-completed Foundazione Prada in Milan, the structure "simulates endless repetitions and symmetries," creating a unique fashion experience that "multiplies and fragments the show into a series of intimate moments."

When first commissioned by Miuccia Prada and Patrizio Bertelli to design Fondazione Prada’s new space in Largo Asarco, OMA set out to “expand the repertoire of spatial typologies in which art can be exhibited and shared with the public.” The result, an “unusually diverse environment” staged within a historic 20th-century distillery south of Milan’s city center that goes beyond the traditional white museum box.

On Sunday, Prada ditched the classic runway to kickoff their 2015 Fall/Winter menswear line in a “disorienting landscape” designed by OMA’s research counterpart AMO. The partitioned catwalk transformed an exiting room inside the Fondazione Prada at Via Fogazzaro 36 in Milan into an intimate series of interconnected spaces affectionately referred to as “The Infinite Palace.”

“The existing room is disguised into a classic enfilade of rooms, gradually changing proportions as in an abstract mannerist perspective. As opposed to a single stage, the new sequence of spaces multiplies and fragments the show into a series of intimate moments,” described AMO.

5 Years Later, A Look Back on OMA's Prada Transformer

Today marks the fifth anniversary of the opening of OMA’s Prada Transformer. This fantastical temporary structure, erected in 2009 adjacent to Gyeonghui Palace in Seoul, Korea, is one of Rem Koolhaas’ most popular projects to date. Composed of a stark white membrane stretched across four steel frame shapes, The Transformer was often referred to as an "anti-blob" --a hexagon, a rectangle, a cross, and a circle leaning against each other to create a tetrahedron-like object reminiscent of a circus tent. The name Transformer came from the idea that any one of the pavilion's sides could serve as the building's floor, allowing for four unique spaces in one building devoted to exhibitions of modern art, fashion and design.

The Prada Transformer played host to four such events, being lifted up and repositioned onto a different face each time via crane. The first was a garment exhibition, displayed using the hexagonal floor plan. The second, a film festival that took place on the rectangular floor plan. A fashion show was staged using the Transformer's circular floor plan, and an art installation was shown using the cruciform floor plan. As patron Miuccia Prada stated in an interview with The New York Times, “In my mind they [the arts] may be mixed but I want to keep them separate… So the Transformer concept was not for a generic space, but to be very specific, with all things separate in one building.”

We asked OMA's Vincent McIlduff to tell us more about this project. See his answers, a photo gallery and a time-lapse video of the transformation after the break!