Behrens was adept at fostering leading architects of the day: in addition to Mies, Le Corbusier and Walter Gropius both worked in his office. During his time with Behrens, Mies worked on the design for the iconic modernist AEG Turbine Factory in Germany, a project which is said to have influenced his "less is more" aesthetic.

Spanish-born Lluis Sert trained in Barcelona and established his own practice before receiving an invitation in 1929 from Le Corbusier to work (unpaid) in his Parisian studio. Lluis Sert's affinity for concrete has been attributed to his formative years with Le Corbusier, though his skill in housing design is said to have greatly surpassed that of his mentor.

Rossi was the first Italian to win the Pritzker Prize and fostered talent in the likes of Jesse Reiser, a young architecture apprentice who consequently founded Reiser + Umemoto, RUR Architecture PC. Reiser is now a professor of architectural design at Princeton University.

From 1956 to 1970 Piano was part of Kahn's ever-expanding office, working closely with the construction titan and simultaneously establishing his own architectural sensibility. Piano began in earnest drafting lighting sketches for one of Kahn's many open concept factories - a project that is said to have deeply influenced Piano's use of light in design. Recently, Piano designed an addition to Kahn's Kimbell Art Museum in Texas.

Iconic Italian architect Carlo Scarpa was more than an employer to Botta, he was also his thesis advisor. In 1963, Scarpa was renovating the Fondazione Querini Stampalia. while simultaneously advising Botta, a student at IUAV in Venice. Botta would subsequently work for Scarpa on a series of projects in northern Italy, particularly in the Veneto region.

Before establishing his own firm in 1963, Isozaki trained under the supervision of Kenzo Tange, one of Japan's great modern architectural masters. During this time, Isozaki was deeply influenced by Tange's intersectional style, subsequently producing his own iconic modernist Japanese style.

In the 1950s, Victor Gruen Associates was one of Southern California's most noteworthy firms, competing with the likes of Richard Neutra and Rudolph Schindler. As a recent graduate Gehry joined Gruen, working primarily on the firm's signature utilitarian designs. Gehry grew restless and dissatisfied with his work, ultimately leaving the firm to travel to Paris where he studied the works of Le Corbusier.

In the midst of his studies at the Cooper Union in New York City, Ban departed for his native Japan to work in Isozaki's office in 1983. After a year of work for Isozaki, Ban returned to the United States to complete his studies before founding his own firm in Tokyo in 1985.

Prince-Ramus began with OMA in Rotterdam before launching the firm's satellite office in New York, working on many notable projects including the Wyly Theatre in Dallas, the Guggenheim Las Vegas, and the Seattle Central Library. In 2006 Prince-Ramus departed OMA, taking the firm's New York office to found REX with colleague Erez Ella.

Although Ingels worked at OMA for a brief two years (1998-2000), his portfolio included designs for the Seattle Central Library, one of the firm's most prestigious and notable works. In 2001 after a formative period with Koolhaas, Ingels co-founded PLOT (the precursor to BIG) with fellow OMA alum Julien de Smedt.

Upon graduating the Architectural Association in 1977, Hadid worked on OMA's earliest projects under the direction of founders Elia and Zoe Zenghelis, and former classmate Rem Koolhaas. In 1980, Hadid left the firm to start her own practice, Zaha Hadid Architects.

Two of the three co-founders of MVRDV apprenticed under fellow Dutchman Rem Koolhaas before launching their firm in 1993. Maas and van Rijs each played integral roles in many of OMA's projects before leaving the firm and partnering with Natalie de Vries (formerly of Mecanoo) to found their Rotterdam-based firm.

Prolific American architect Jeanne Gang began her career at OMA, serving as a designer on one of the firm's seminal projects: Maison Bordeaux. In 1997 she left Koolhaas' office to found Studio Gang, a Chicago-based firm with a broad repertoire.

Outgoing Dean of Princeton School of Architecture, Zaera-Polo has humble beginnings as an architect at OMA from 1991-1993. Shortly after completing his studies at the Harvard University Graduate School of Design, Zaera-Polo joined Koolhaas' firm, ultimately leaving to found Foreign Office Architects and later AZPML.

Founding partner of OMA's Beijing office, Scheeren was the lead architect on the firm's China Central Television Headquarters project. Scheeren parted ways with Koolhaas in 2010 in a move similar to the exit of Joshua Prince-Ramus, founding Buro Ole Scheeren that same year.

Conceptual architect and professor Greg Lynn found his beginnings working for New York Five founder Peter Eisenmann, and subsequently launched his think tank studio Greg Lynn Form, based in Venice. Lynn is said to have delved into his passion for experimental architecture during his time with Eisenmann.

Shortly after graduating from Cornell University, prolific modernist Richard Meier landed briefly at Skidmore, Owings and Merrill in New York City, before quickly moving to work for Marcel Breuer. Meier's time with Breuer lasted three years where he honeed his white, geometric style, before leaving to start his own firm in 1963. He was named as a founding member of the New York Five in 1972.

For six formative years, Frank Lloyd Wright worked under the direction of the father of American modernism and leader of the Chicago School. Wright played an integral role in the office and was known by Sullivan as the firm's "pencil," yielding impressive influence over the designs of iconic projects including Chicago's Auditorium Theatre.

After making a strategic play to meet Wright at Louis Sullivan's Funeral, Neutra secured a brief apprenticeship in Wright's office. His time with Wright is said to have deeply influenced his design aesthetic, with visible similarities between his own creations and those of his mentor.

Soleri was born and raised in Turin, Italy, where he completed his studies in architecture. Infatuated by the designs of Frank Lloyd Wright, Soleri traveled to the United States in December 1943 where he began a fellowship that would last a year and a half at Wright's Arizona studio, Taliesin West. Soleri's work was greatly influenced by Wright and by the desert landscape.

Sheila O'Donnell and John Tuomey met while working for the iconic James Stirling at his London studio, subsequently founding O'Donnell + Tuomey, a Dublin-based partnership with notable projects worldwide. The duo developed their architectural sensibilities under Stirling's direction and have since been shortlisted for the Stirling prize five times.

Before founding Foreign Office Architects with Alejandro Zaera-Polo in 1993, Moussavi apprenticed at Renzo Piano Building Workshop and OMA, working on an array of projects. Moussavi went on to serve as a professor at the Harvard Graduate School of Design, working alongside former boss Rem Koolhaas.

Have a name to add to our list? Contribute in the comments below! 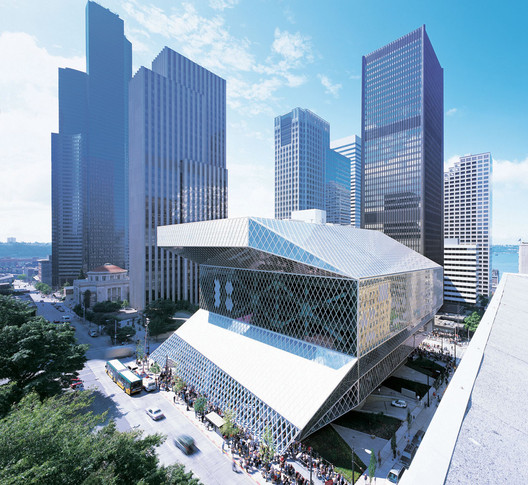