Metropolitans take pride in their storied cultural venues, the chroniclers of intellectual acumen and architectural achievement. While these icons revel in their ornate design, immersive grandiosity, and dramatic acoustics, the pandemic has introduced numerous challenges to the rules of assembly.

Recognizing changes in the rituals of attending a show—from procession and gathering to engagement—architects and cultural leaders are designing the next generation of performance venues while asking the question: How does architecture solve issues raised by a building’s inherent purpose? Is it possible to maintain the essence of a venue through gentle yet effective changes in people’s habits? The answers seem to rely on updating the auditorium culture (which dates as far back as the Colosseum) with contemporary design solutions rooted in new technologies.

Washington D.C. has earned a reputation for iconic architecture. Emerging from the L'Enfant and McMillan Plans, Washington’s cityscape includes wide streets and low-rise buildings that sprawl out from circles and rectangular plazas. From the White House to Lincoln Memorial, Washington’s architecture was built to symbolize the nation’s values. Today, new projects are designed to rethink the city’s morphology while respecting its identity.

The architectural team comprised of Davis Brody Bond and Kieran Timberlake has unveiled its newest updates on the design for 181 Mercer, a 735,000-square-foot complex for New York University that will replace a 35-year-old gym facility and become NYU’s largest classroom building, as well as a space for performing arts, athletics, and students and faculty housing.

As the culmination of a five-month selection process, New York University (NYU) has announced that Davis Brody Bond and KieranTimberlake will be designing its major new facility along Mercer Street between Houston and Bleecker in New York. The facility's many uses will include classrooms, teaching spaces for performing arts, a state-of-the-art sports facility, and student and faculty housing.

Yesterday the Frick Collection announced its plans for a 6-story extension to its gallery in New York, designed by Davis Brody Bond. This article by Robin Pogrebin in the New York Times outlines the details of the extension, as the Frick adds itself to the list of post-recession cultural building projects - a list which includes the Museum of Modern Art, the Whitney Museum of American Art, and Miami's Pérez Art Museum. The article also outlines the challenges the Frick will have in expanding its landmarked 1914 building. Read the article in full here.

Set to open to the public on Wednesday after a highly controversial and contested journey from idea to reality, the September 11 Memorial Museum has inevitably been a talking point among critics this week. The museum by Davis Brody Bond occupies the space between the Memorial Plaza at ground level and the bedrock below, with an angular glass pavilion by Snøhetta providing an entrance from above. A long ramp, designed to recall the access ramp with which tons of twisted metal was excavated from the site, descends to the exhibits which sit within the perimeter boundaries of the twin towers' foundations, underneath the suspended volumes of Michael Arad's memorial fountains.

The content of the museum is obviously fraught with painful memories, and the entrance pavilion occupies a privileged position as the only surface level structure ground zero, in opposition to the great voids of the memorial itself. The discussion at the opening of the museum was therefore always going to center on whether the design of the museum - both its built form and the exhibitions contained - were sensitive and appropriate enough for this challenging brief. Read the critics' takes on the results after the break. 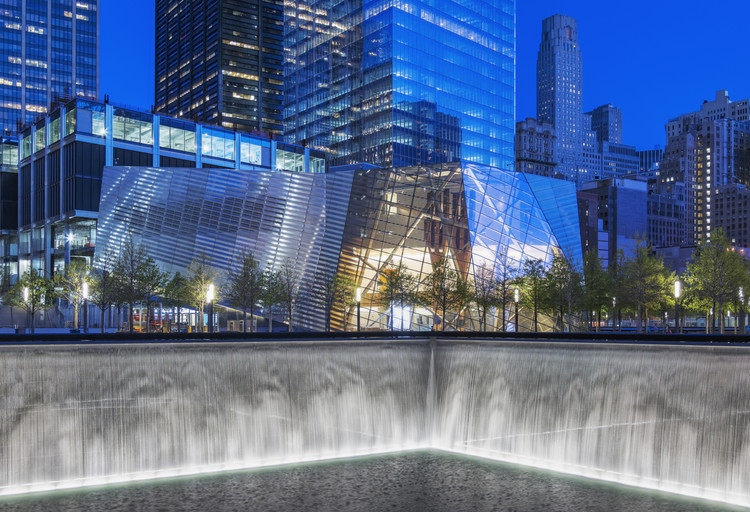 In August, we reported a Request for Qualifications for the renovation of Mies van der Rohe's Martin Luther King (MLK) Jr. Memorial Library in Washington D.C. - Mies' only library and the only building in D.C. A few days ago, the District of Columbia Public Library (DCPL) narrowed down the list of potential firms from 26 to 10 and revealed that it was looking for community input on the library's future spaces and services.

The ten firms that made the cut are:

The Department of State’s Bureau of Overseas Buildings Operations (OBO) has announced the selection of Tod Williams Billie Tsien Architects and Davis Brody Bond to design the New Embassy Compound (NEC) in Mexico City, Mexico. After an intense round of presentations and interviews, the duo was selected from a talented shortlist of nine architectural/engineering teams. As reported on the Latin American Herald Tribune, the jury believed that “their portfolio of work is compatible to the local culture and shows sensitivity that highlights their connection to the character of the site.”

Seattle-based landscape architects Gustafson Guthrie Nichol (GGN) and New York-based architects Davis Brody Bond (DBB) were recently selected as the winners of the National Mall Design Competition for Union Square. Organized by the Trust for the National Mall, a jury of eight esteemed professionals selected a design team for each of the three re-design sites of the National Mall through a three-stage process. The winning design was judged on flexibility, sustainability, and creativity of their design and how well it reflects the established vision and design influences of this historic setting. More images and architects’ description after the break.