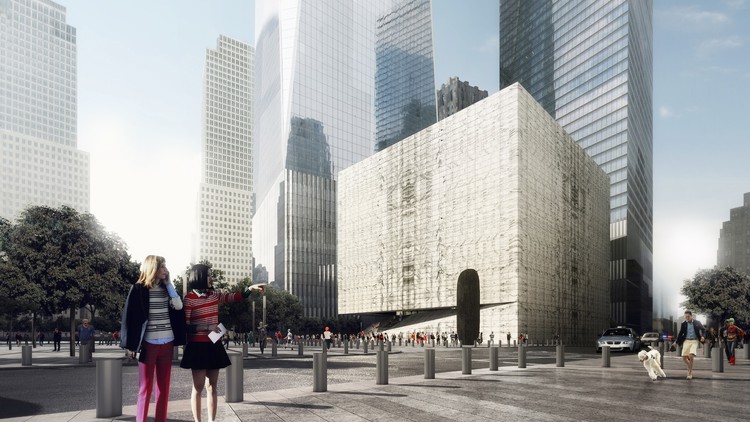 Set into the complex campus, the 90,000 square foot building has been rotated to fit within below-ground constraints, as well as address the 9/11 museum and transportation hub. To complement the building's overall stoic demeanor, a slice has been cut out of the cube to provide seating that opens onto the new public plaza outside.

The structure is wrapped in translucent, veined marble (“from the same Vermont quarry as the U.S. Supreme Court building and the Thomas Jefferson Memorial”) and then laminated within insulated glass – giving the building an elegant, book-matched stone appearance by day, while the thinness of the material creates a dematerialized, glowing appearance at night that displays silhouettes of activity within.

Designed for high-levels of flexibility, the Perelman Center will contain three performances halls seating 499, 250 and 99 people, as well as a rehearsal room capable of adapting for alternative performance configurations.

“While the building’s elegant exterior befits the site, its muscular, utilitarian interior expresses the workhorse quality necessary for the changing nature of The Perelman Center’s artistic needs, through ruggedly beautiful materials that encourage the frequent transformation of scenery and stage-audience configurations,” explain the architects in a press release.

“The Perelman Center is an immensely flexible canvas on which directors can script the patrons’ entire experience from their very entrance into the building,” said Joshua Prince-Ramus, Principal of REX. “It is a ‘mystery box,’ a constant source of surprise for theatergoers and the community. We are honored to be involved with such an important project on such an important site.”

The Perelman Center is expected to open to the public in 2020. Construction costs for the project are currently estimated at $243 million.

News via The Perelman Center. 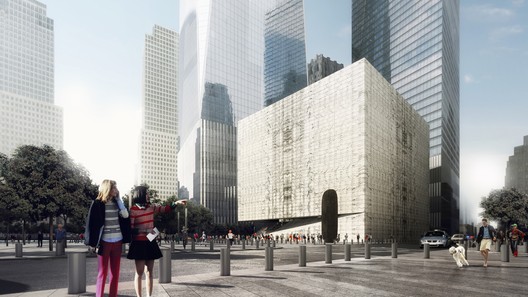