Washington D.C. has earned a reputation for iconic architecture. Emerging from the L'Enfant and McMillan Plans, Washington’s cityscape includes wide streets and low-rise buildings that sprawl out from circles and rectangular plazas. From the White House to Lincoln Memorial, Washington’s architecture was built to symbolize the nation’s values. Today, new projects are designed to rethink the city’s morphology while respecting its identity. 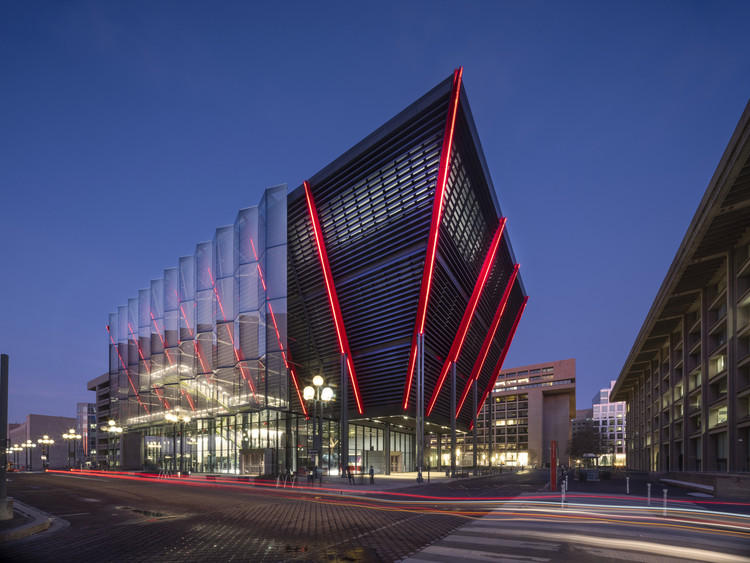 Informed by a series of standards, the city and the National Mall were planned in accordance with the Height Act of 1910 that controlled density and height limits. Building off powerful works like Maya Lin’s Vietnam Memorial, new projects showcase a range of contemporary approaches to design across Washington. Built among historic contexts, these projects reinterpret monumentality through modern forms and expressions. Civic in nature, they explore public space and development through open spaces and buildings alike. In turn, they orient visitors to the conditions and character of place while reimagining the architecture of Washington.

Located at the center of the District of Columbia’s historic neighborhoods in Ward 8, Saint Elizabeths East is on its way to becoming a viable mixed-use, mixed-income community. With the planned consolidation of the Department of Homeland Security (DHS) and location of over 14,000 employees on the West Campus, the redevelopment of St Elizabeths East has become a critical project in realizing the District’s goals of cultivating an innovation-based economy.

Adjaye Associates won an open competition to design two new neighbourhood libraries for the District of Columbia. The brief called for the new buildings to be flexible, accessible, welcoming and inviting. Resonating with the Idea Stores in London’s Tower Hamlets, the libraries challenge the traditional closed typology, introducing a social element that establishes a strong urban and cultural remit.

As the main focus of the 135-acre Semper Fidelis Memorial Park, The National Museum of the Marine Corps, just outside of Washington D.C., opened in 2006 to coincide with the Marine Corps’ 231st anniversary. The primary building of the Marine Corps Heritage Center contains 120,000 square feet of museum gallery space, an orientation theater, office space, gift shop, and two restaurants, all welcoming visitors to explore the history and values of the Corps.

Over two decades in the making, Frank Gehry's design for the Dwight D. Eisenhower Memorial in Washington, D.C. finally opened to the public. A tribute to the 34th President of the United States, the memorial was commissioned by Congress in 1999 to honor the legacy of the World War II Supreme Allied Commander. Eisenhower is well known for leading the invasion of Normandy, a turning point in the war, and for serving two terms as President of United States.

The building reaches the city’s height limit of 130 ft from grade in just seven stories. Its most prominent features are the angled facades of the exhibit floors on the south and west sides of the site, encased in a black box. Propped up on columns over an aligned, existing structure, the black box comprises the bulk of building including its exhibition spaces.

Located on Constitution Avenue, adjacent to the National Museum of American History and the Washington Monument, the museum will house exhibit galleries, administrative spaces, theatre space and collections storage space for the NMAAHC. The design rests on three cornerstones: the “corona” shape and form of the building; the extension of the building out into the landscape – the porch; and the bronze filigree envelope.

As a “living memorial” for President John F. Kennedy, the Kennedy Center for the Performing Arts takes an active position among the great presidential monuments in Washington, D.C. Through public events and stimulating art, the Kennedy Center offers a place where the community can engage and interact with artists across the full spectrum of the creative process. 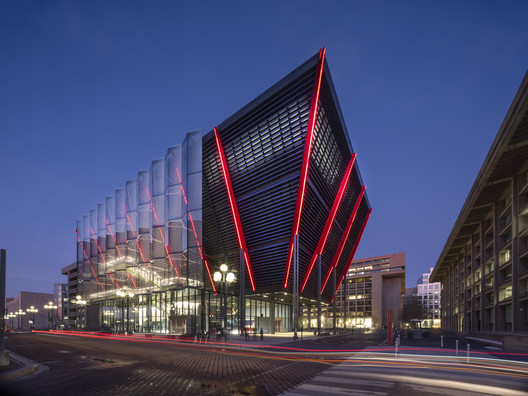