Save
Who Has Won the Pritzker Prize?
Share
Or
Copy

The award is an initiative funded by Jay Pritzker through the Hyatt Foundation, an organization associated with the hotel company of the same name that Jay founded with his brother Donald in 1957. The award was first given in 1979, when the American architect Philip Johnson, was awarded for his iconic works such as the Glass House in New Canaan, Connecticut.

The Pritzker Prize has been awarded for forty-four straight editions without interruption, and there are now 23 countries with at least one winning architect. To date, half of the winners are European; while the Americas, Asia, and Oceania share the other editions. In 2022, Francis Kéré became the first African architect to win the Pritzker Prize.

In terms of gender, six women have won the award: Zaha Hadid (2004), Kazuyo Sejima (2010, together with Ryue Nishizawa), Carme Pigem (2017, together with Ramón Vilalta and Rafael Aranda), Grafton cofounders Yvonne Farrell and Shelley McNamara (2020) and Anne Lacaton (2021, together with Jean-Philippe Vassal). While in 2012, Lu Wenyu, partner and wife of Wang Shu, rejected the proposal to share the award, saying that "I never wanted a Pritzker."

However, this has not been the case for Denise Scott Brown, who did not receive the award in 1991 alongside her partner and husband Robert Venturi. In 2013, organizations and personalities demanded to give the prize retroactively to Scott Brown, a request that was rejected by Peter Palumbo—then president of the jury—who closed down the discussion by explaining that "a jury can not reopen or criticize the work of a previous jury."

These are the Pritzker Prize winners since 1979: 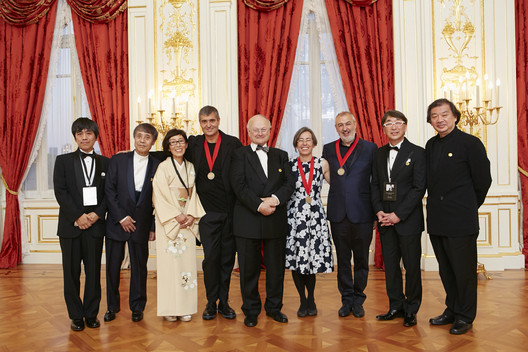