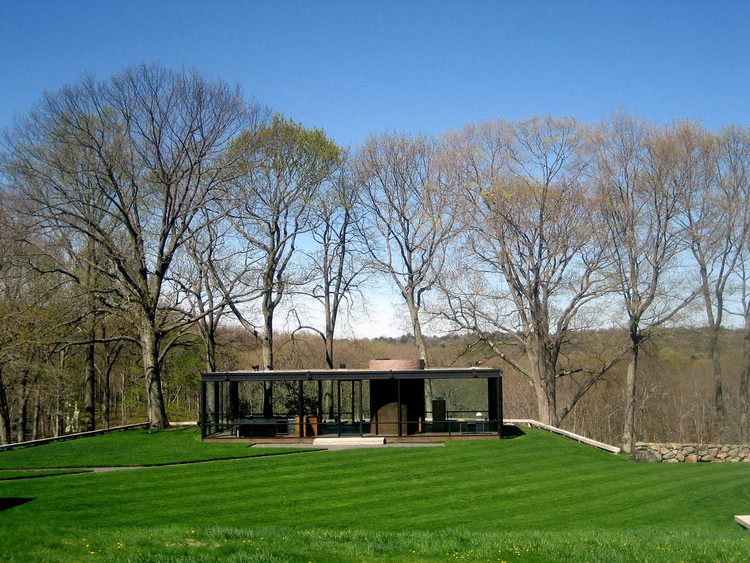 Text description provided by the architects. Inspired by Mies van der Rohe's Farnsworth House, the Glass House by Philip Johnson, with its perfect proportions and its simplicity, is considered one of the first most brilliant works of modern architecture. Johnson built the 47-acre estate for himself in New Canaan, Connecticut. The house was the first of fourteen structures that the architect built on the property over a span of fifty years.

Completed in 1949, the Glass House was the first design Johnson built on the property. The one-story house has a 32'x56' open floor plan enclosed in 18-feet-wide floor-to-ceiling sheets of glass between black steel piers and stock H-beams that anchored the glass in place. The structure, however, did not impress Mies when he visited the house. It is said that the brilliant mentor to Philip Johnson stormed out in fury because of what he interpreted as a lack of thought in the details of the house.

Nonetheless there are still many features that contribute to the beauty of the house. The clear glass panels create a series of lively reflections, including those of the surrounding trees, and people walking inside or outside of the house, layering them on top of one another creating everchanging images with each step taken around it.

The interior of the Glass House is completely exposed to the outdoors except for the a cylinder brick structure with the entrance to the bathroom on one side and a fireplace on the other side. The floor-to-ceiling height is ten and a half feet and the brick cylinder structure protrudes from the top.

The floor is also made of red brick laid out in a herringbone pattern and is raised ten inches off of ground level. The only other divisions in the house besides the bathroom are discreetly done with low cabinets and bookshelves, making the house a single open room. This provides ventilation from all four sides flowing through the house as well as ample lighting.

Although the house is the primary attraction on the site, Johnson used the expansive land around it to allow his imagination to run and build thirteen more structures that include a guest house, an art gallery, and a sculpture pavilion.

The guest house, connected to the Glass House with a stone path that lays over the expansive lawn immediately surrounding it, is a heavy brick structure, contrasting the extreme lightness and transparency expressed in the Glass House.

The art gallery is buried underground in order to not take away attention from the house, making it windowless which is uncommon for a gallery. Wright's other notable experiment on the site included a sculpture gallery which is "an assymmetrical white-brick shed with a glass roof...conceived as a series of interlocking rooms that step down around an open, central space."

Declared a National Historic Landmark in 1997, the Glass House is still considered a modern marvel. The beauty in its composition along with the rolling landscape have people travelling to visit and experience it firsthand everyday, and with the lines of the Glass House and the other buildings smoothly blending in with the lines of the horizon and the surrounding landscape, one can feel a breathtaking sensation of endlessness.