MVRDV has unveiled their design for Marble Arch Hill, an installation that aims to give Londoners a new perspective on Hyde Park. Sited next to the city's Marble Arch, the project takes the form of a hollowed-out mountain to give visitors rare views over the park. Based on scaffolding structure, the design aims to create renewed interest in the area as London works to emerge from the pandemic. 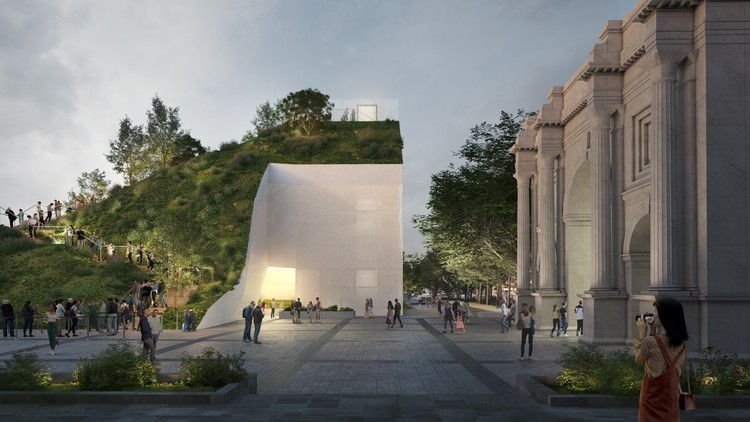 In recent years, solar energy has become a very popular method to power electric vehicles. This emerging technology has motivated the development of new architectural typologies. An evident evolution of traditional gas stations, it could be foreseen that solar-powered charging stations will begin to significantly grow in numbers in our cities in both public and private spaces.

The “London Mastaba” has opened in Hyde Park. A temporary sculpture floating on the Serpentine Lake, the project is the first major public outdoor sculpture in the United Kingdom designed by the artist Christo. The opening comes as new photographs by Wolfgang Volz are released which chart the construction and completion of the striking art piece.

Featuring 7,506 horizontally-stacked barrels floating on the Serpentine Lake, the Mastaba coincides with an exhibition of Christo and Jeanne-Claude’s work at the Serpentine Galleries featuring sculptures, drawings, collages, and photographs spanning more than 60 years. 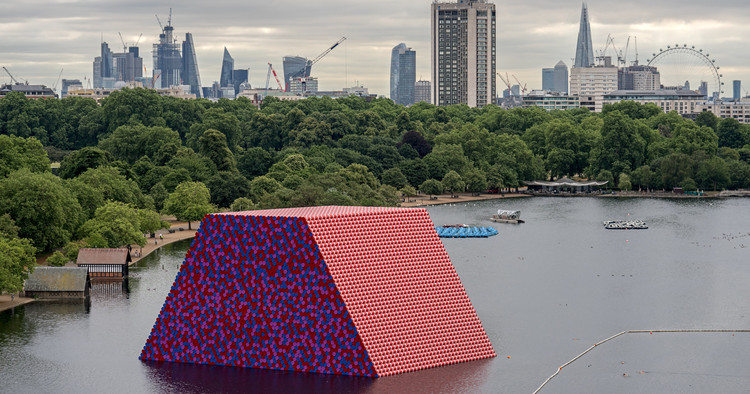 Artist Christo has released images of his proposed temporary sculpture for Hyde Park, London, to become his first major outdoor public sculpture in the United Kingdom. Titled “The Mastaba (Project for London, Hyde Park, Serpentine Lake)," the sculpture will consist of 7,506 horizontally-stacked barrels floating on the Serpentine Lake throughout the summer of 2018.

“The Mastaba” will coincide with an exhibition of Christo and Jeanne-Claude’s work at the Serpentine Galleries, featuring sculptures, drawings, collages and photographs spanning more than 60 years. Supported by Bloomberg Philanthropies, the exhibition will be the artists’ first in a UK public institution since 1979 and will showcase their long-running exploits with barrel forms, chosen initially for their sculptural effect and low cost. 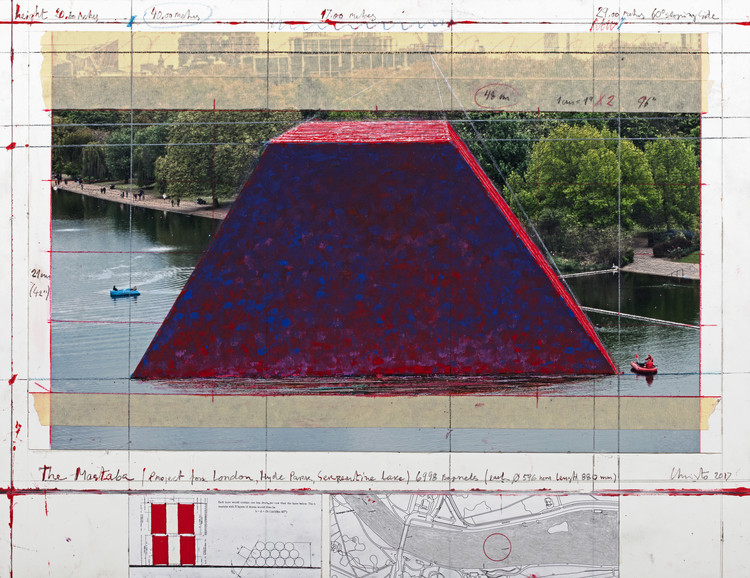 Michel Kozman has imagined a light-filled library for Hyde Park as part of the Archasm Hyde Park Library Competition that ran earlier this year. The competition, which attracted 378 registrations, called for “a stimulating and exciting approach towards the design of a library at Hyde Park.” The brief requested consideration be given to modern forms of media, including audiovisual and digital technologies, challenge the traditional library typology and become a zone within the park for knowledge exchange and gathering. 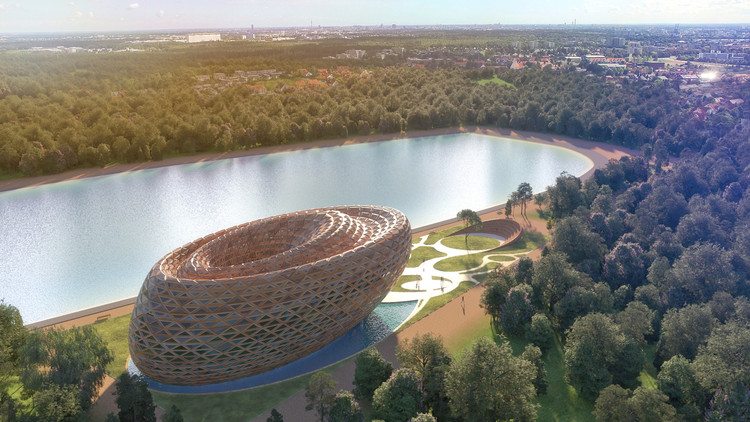 Following the opening of the 2017 Serpentine Pavilion, designed this year by Diébédo Francis Kéré (Kéré Architecture), photographer Laurian Ghinitoiu has turned his lens to London. Designed to mimic a tree, or a canopy of trees, the wooden structure has been designed to fuse cultural references from Kéré's home town of Gando in Burkino Faso with more "experimental" construction techniques. His ambition is that the pavilion becomes a social condenser – "a symbol of storytelling and togetherness." 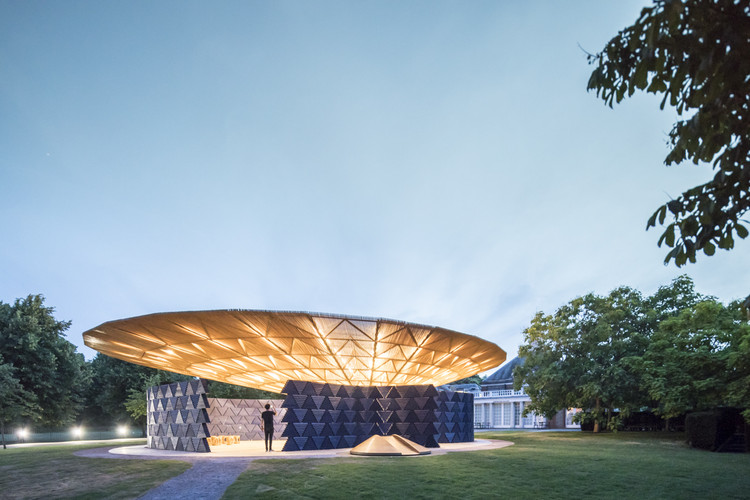 Step Into BIG's 2016 Serpentine Pavilion with This 360° Panorama

Following the success of last year’s virtual tour of Selgascano’s 2015 Serpentine Pavilion, Photographer Nikhilesh Haval of nikreations has shared with us his virtual tour of BIG’s 2016 Pavilion entry. Hosted this year on Google Street View, the tour allows you to move through and around the “unzipped wall” design, giving you the ability to perceive how sunlight interacts with the structure. Check out how visitors are using the pavilion as an escape from the sunny park or sipping on drinks ordered at the pavilion bar – and don’t forget to look up, where it’s easy to get lost in the sea of interlocking fiberglass bricks.

The Serpentine Galleries have revealed that the 2016 Serpentine Pavilion will be designed by Bjarke Ingels Group (BIG), alongside a surprise announcement that four "Summer Houses" will also be built by internationally acclaimed practices. Kunlé Adeyemi – NLÉ (Amsterdam/Lagos), Barkow Leibinger (Berlin/New York), Yona Friedman (Paris), and Asif Khan (London) will each design a 25sqm structure inspired by the nearby Queen Caroline’s Temple, a neo-Classical summer house built in 1734 and "a stone’s throw from the Serpentine Gallery." In line with the criteria for the selection of the Serpentine Pavilion architect, each chosen to design a Summer House has yet to realise a permanent building in England.

Photographer Nikhilesh Haval of nikreations has shared with us this virtual tour of the 2015 Serpentine Pavilion. Taking viewers through a series of 360-degree panoramas shot on a mercifully sunny day, the tour shows off the pavilion's striking colors to good effect and gives some indication of the complex and dynamic arrangement of the design's double skin.

For those won't get the opportunity to visit for themselves, Haval's virtual tour is a great way to experience SelgasCano's psychedelic space as it gives a reasonable impression of what it feels like to actually be there. I can say that with some authority because, since I last wrote about the pavilion, I got the chance to visit it myself - and what I found was completely different to the pavilion I might have expected had I been taking cues from our comments section. I'd like to talk to our readers about that directly, if I may.

We're just three days into the four-month display of SelgasCano's 2015 Serpentine Gallery Pavilion and the comments it has generated from ArchDaily readers have already been as colorful as the pavilion itself - with criticisms ranging from "worst Serpentine Gallery Pavilion ever" to "trash bag monster" and a few other comparisons that I'd rather not even repeat. This may surprise some people, but at ArchDaily we do actually read the comments section, and we get it: unless you're the brave and persistent soul who comments as "notyourproblem," who thinks "it must be exciting getting inside those tunnels," there's a good chance that you hate this pavilion - and I don't use the word "hate" lightly.

But is this violent dismissal warranted? In short, is SelgasCano's pavilion as bad as you probably think it is? Fortunately, we're not the only publication giving the pavilion extensive coverage: as usual the Serpentine Gallery has attracted a number of the UK's most well-known critics. Find out what they thought of the pavilion after the break. 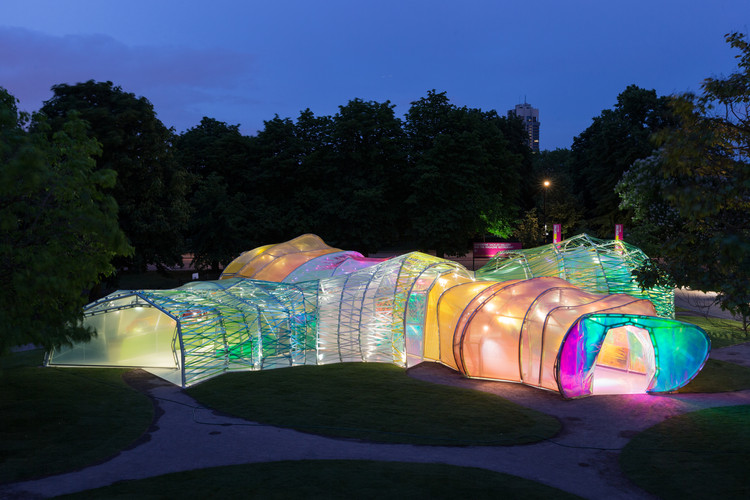 Take a peek into SelgasCano's Serpentine Gallery Pavilion—which opened on June 22—through the lens of Romanian photographer Laurian Ghinitoiu.

With the opening ceremony of SelgasCano's Serpentine Gallery pavilion earlier today, the Serpentine Gallery has released a set of images by Iwan Baan, capturing the riotous color explosion delivered by the pavilion's ETFE wrapping. Always one of London's most popular architectural attractions over the summer, this year marks the pavilion's 15th anniversary, and will be on display until October 18th.

Read on after the break for more images - and stay tuned to this posts for updates throughout the day! 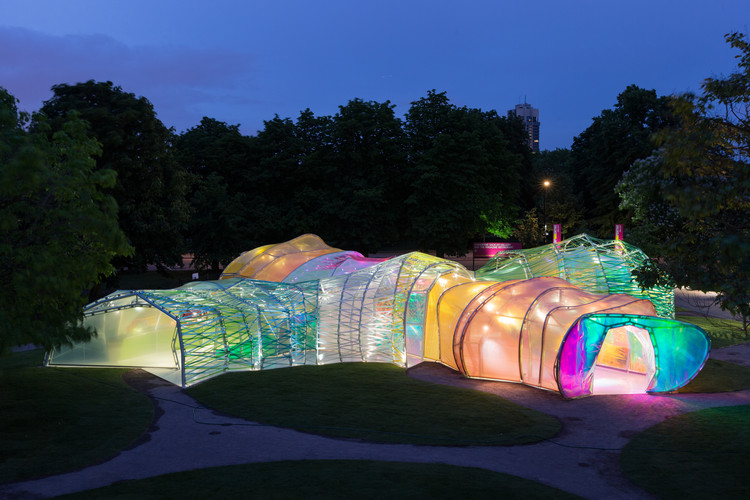 The 2015 Serpentine Gallery Pavilion was revealed today in London, showcasing the colorful plastic design by SelgasCano to the public for the first time. Consisting of a minimal steel frame wrapped in multi-colored ETFE sheets and webbing, the design is encompassed by "secret corridors" which provide access to the main internal space, inspired by the multi-layered and sometimes chaotic network of the London underground. 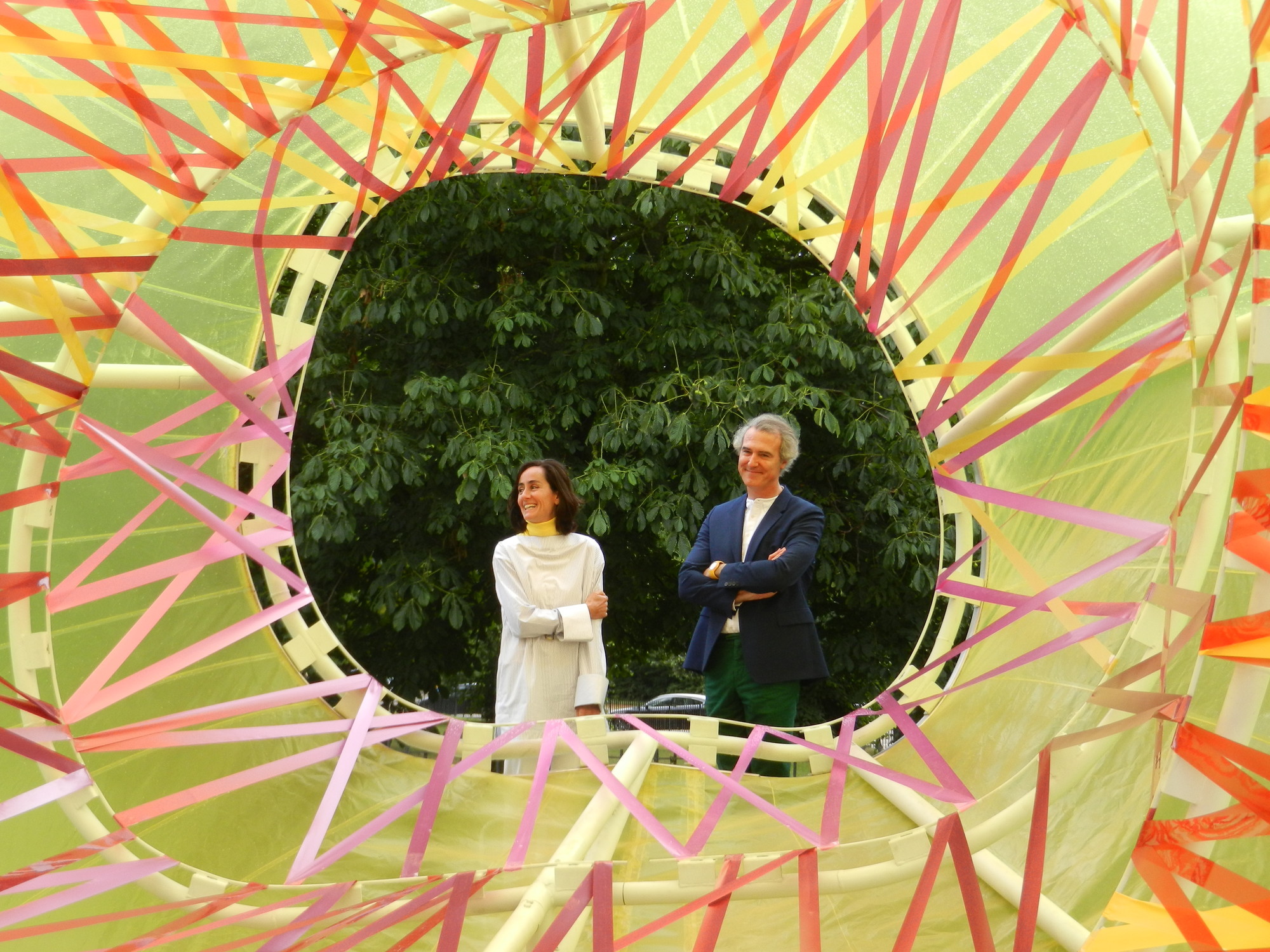 The 2014 Serpentine Gallery Pavilion, designed by Chilean architect Smiljan Radic, opened this morning in London's Hyde Park. The pavilion, a glass-fibre reinforced plastic shell resting on large quarry stones, was inspired by a papier mâché model which Radic created four years ago as a response to the Oscar Wilde story 'The Selfish Giant'.