Installed on the roof of a multi-story parking building adjoining the historic Tobacco Dock —a former tobacco warehouse currently used for large corporate and commercial events— in the Wapping district. The latest edition of McQueen aimed to celebrate "the environment in which we live and work, in London, and in the elements as we experience them each day," as explained by Sarah Burton, Creative Director of Alexander McQueen.

We moved from water – and the mud on the banks of the Thames – to the sky and the ever-changing, all-encompassing magnificence that represents. The artwork for the prints in this collection was shot from the rooftops of the studio where we are lucky enough to have the most incredible views of the city: from Saint Paul’s Cathedral to the London Eye.

Arranged around a circular scene, the wooden chairs direct the gaze to the new designs. Inspired by the weather, Burton "captured the formation and colouration of clouds from daybreak to nightfall and documented changing patterns, from clear blue skies to more turbulent ones."

The new dome seeks to ensure that the atmosphere of the history and the climate of the city are the main protagonists of the fashion show. In this sense, it perfectly complements the musical atmosphere of songs such as Massive Attack's "Safe From Harm" and Daniel Avery's "Yesterday Faded.

If you missed the show, check out the Alexander McQueen Spring / Summer 2022 Women's Fashion Show. 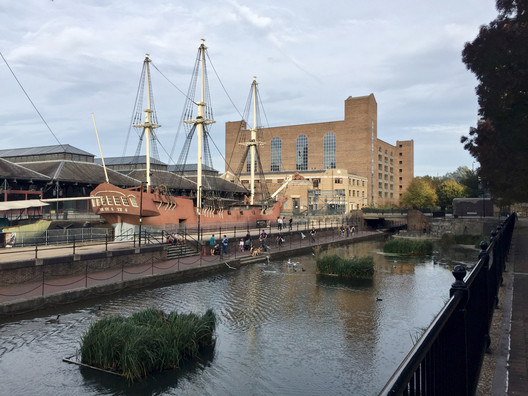