Save
Constructing The Floating Piers: How the Last Great Work of Christo and Jean-Claude was Built
Share
Or
Copy

Until July 3rd, you can experience the latest and last work of artist duo Christo and Jean-Claude. Called The Floating Piers, the floating dock extends over the water of Italy's Lake Iseo.

The work consists of a three kilometer walkway wrapped in 100,000 square meters of yellow cloth, which is supported by a floating dock system composed of 220,000 high-density polyethylene cubes. These elements naturally undulate with the movement of the waves at Lake Iseo, which is located 100 kilometers east of Milan and 200 kilometers west of Venice. The floating yellow roads extend from the pedestrian streets of Sulzano, connecting the islands of San Paolo and Monte Isola.

The Floating Piers is the first large-scale work of Christo for more than a decade after making The Gates in 2005 with Jeanne-Claude, who passed away four years later. Due to the importance of Christo and Jeanne-Claude's work and the inspiration they have given to many architects, we wanted to investigate the process of building this spectacular project, which makes the dream of walking on water a reality. 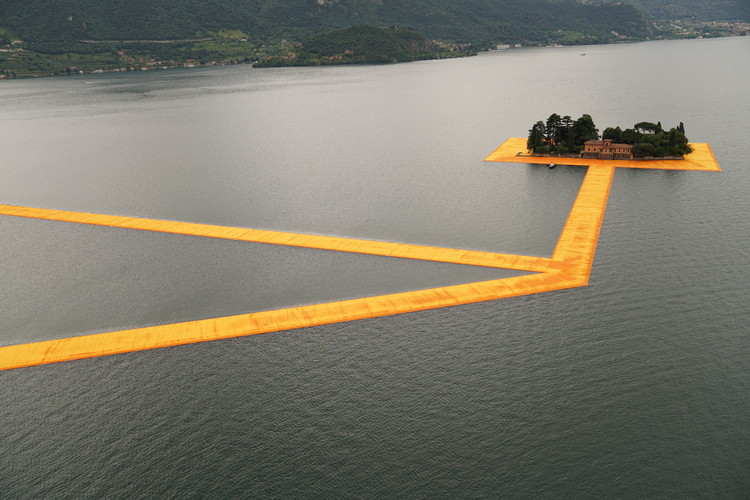 Noviembre 2015: Christo in his studio working on a preparatory drawing for The Floating Piers.

January 2016: At a factory in Fondotoce at Lago Maggiore, 200,000 high-density polyethylene cubes are manufactured over a period of eight months before delivery to the work site in Montecolino

January 2016: At the headquarters in Montecolino, construction workers assemble the piers, which are assembled in 100-meter-long segments and stored outside Montecolino on Lake Iseo

February 2016: Aerial view of the project’s building yard on the Montecolino peninsula and the parking area for the thirty 100 by 16 meter sections on Lake Iseo.

March 2016: Commercial divers from France are hired to install the underwater anchors at depths up to 90 meters.

March 2016: A diver connects a rope made of ultra-high-molecular-weight polyethylene (UHMWPE), covered with a polyester protective layer with a breaking load of 20 metric tons, to one of the anchors on the lakebed to keep the piers in place.

April 2016: Frames are attached underneath the cubes to the deadweight anchors on the lakebed with rope made of ultra-high-molecular-weight polyethylene (UHMWPE), covered with a polyester protective layer and with a breaking load of 20 metric tons.

April 2016: Workers push one of the frames underneath a floating element before connecting it with  screws.

April 2016: Workers start to encircle the island of San Paolo with the first floating elements.

April 2016: Aerial view of the project’s building yard on the Montecolino peninsula and the parking area for the thirty 100 by 16 meter sections on Lake Iseo.

May 2016: The felt that will cover the cubes underneath the yellow fabric is transported from Montecolino to San Paolo island by Elimast Helicopter Service.

May 2016: Workers install the felt that will cover the floating cubes before the yellow fabric is installed

June 2016: Final installation of the docks, and covering with the yellow fabric 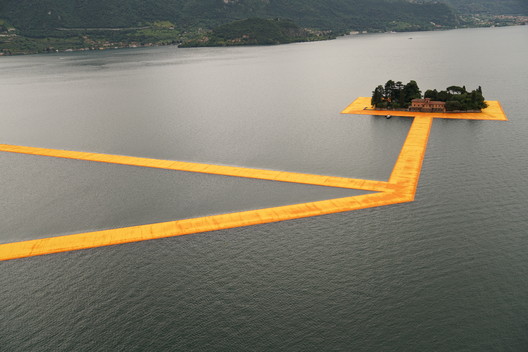