Save
Moscow Urban Forum: Rem Koolhaas, Vladimir Putin and the Future of Moscow
Share
Or
Copy

During the event, we discussed many of these initiatives with Marat Khusnullin, Deputy Mayor of Moscow in the Government of Moscow for Urban Development and Construction (video below).

This year, the Forum was held at the Zaryadye Park, a new urban park located next to the iconic Red Square.The project,part of a series of public competitions held in the past years,was designed by Diller Scofidio + Renfro, together with Hargreaves Associates and CityMakers; it brings a piece of wild nature into the city center and opens to new views of the river through a dramatic cantilevering bridge balcony. The project has generated a lot of attraction among Muscovites and tourists, being visited by more than one million people in just one month, validating the importance of opening new public spaces in the city center. The park was awarded with the ArchDaily 2018 Building of the Year Award in the Public Architecture Category, which we presented in one of the opening sessions on a panel with Moscow City Architect Sergey Kuznetov, Charles Renfro, Mary Margaret Jones, Petr Kudryavtsev.

The renowned Rem Koolhaas actively participated on panels during the first day, joining Moscow City Mayor Sergey Sobyanin and Elizabeth Diller to discuss the current state of Moscow City in the context of other metropolises; later, he joined Winny Maas, Yuri Grygoryan, Sergey Tchoban, Sergey Kuznetov, and Francine Houben, to explore how European architects are working today in Russia on a session led by Giovanna Carnevali.

But at the end of the day, the main hall was packed to witness his interview with journalist Vladimir Pozner. In this interview Rem shared the strong influence Russia and its architecture had on his career, when he first visited Moscow at 22 years old while still a journalist. By working on an exhibit about Russian architecture he was exposed to something that made him turn to practice architecture.

"Basically when I came to Russia I understood for the first time that architecture was not about making shapes or making buildings even, but that it was a profession that could define the content of society and could intervene in shaping society. It is an ambitious interpretation of architecture, but when I saw the work of Russian architects in the 20s and 30s, I understood that that was their escence: that architecture was a way of screenwriting, but with buildings rather than words."

The conversation moved between his views of Moscow--“the only megacity in Europe” due to its scale and isolation in the vast territory unlike the urban pattern continuity found in Western Europe--and the relation of politics and architecture, housing, modernism and the aesthetics of communism.

In relation to the vast non-urbanized scale of Russia, Rem discussed his views on Countryside, his upcoming exhibit at the Guggenheim that showcases a part of the world that will see a particular kind of development in the age of large scale data centers, robotic agricultural production, and new non-centralities thanks to technology.

Rem also shared more details about his plans for the renovation of the New Tretyakov Gallery. One of the most fantastic museums in Russia that hosts masterpieces by Malevich, Kandinsky, and Andronov, it is located along the Moskva river on a cultural axis that goes from Gorky Park (with OMA’s New Garage Museum) to Red October, with the new V-A-C Foundation by Renzo Piano. OMA has planned to transform the existing fragmented exhibit rooms, by opening them and reveal large spaces for exhibition.

But it was the highly expected visit of President Vladimir Putin that capped off day two of the forum. On his speech he focused on highlighting the urban transformation of Moscow described above, but most importantly, he included what is coming next in terms of taking these lessons to the rest of the country to replicate the success of Moscow. Other cities that have been seen complex development projects such as Kazan, Sochi and Vladivostok, emphasize a commitment to urban development as a tool for decentralized growth (and not just in this post-Winter Olympics and post-FIFA World Cup moment).

“It is important that what our guests saw was not a showcase, not some artificial, short-term outer appearance, some flashy, virtual world. Everything they saw was real. The entire country is changing, and this is a consistent, long-term trend. [...] These investments are designed, first of all, to improve the quality of life of our citizens and to create a whole range of opportunities for the personal fulfillment of each one of them”.

With three quarters of the Russian population living in urban areas today, there is a big potential to extend these practices to the rest of the territory. With more than 30 cities that have over 500,000 residents, there is a bright future for Smart Cities, IoT, and the tech and creative industries. On the other hand, there are 900 towns with less than 100,000 residents in which tech and transport can help in a more decentralized aspect. This connects with Rem Koolhaas’ views on the Russian countryside. About this Putin added:

“Today, we are facing a challenge of paramount importance – we need to help these towns unleash their potential, so that they can become centres of tourism, art, science and technology; so that the quality of life there can meet the latest standards and people’s needs. It is, to be sure, a serious creative and professional challenge for economists, managers, architects and urbanists.” [...] “Through the development of road, transport and digital infrastructure, big towns, small towns, and historic towns, as we call them, will get an additional boost. Their residents must have full access to all modern services”.

This speech shows a strong commitment, and if moves accordingly it will open many opportunities for architects and urbanist to take on this, local and foreign.

Moscow is a powerhouse city that showcases how strong leadership has aligned different actors--from the City Architect, academic institutions such as Strelka and MARCH, the private sector, and organizations like MUF--- to provide continuity and a strong base for the future of the city, and how this can impact the future of Russia as a whole. 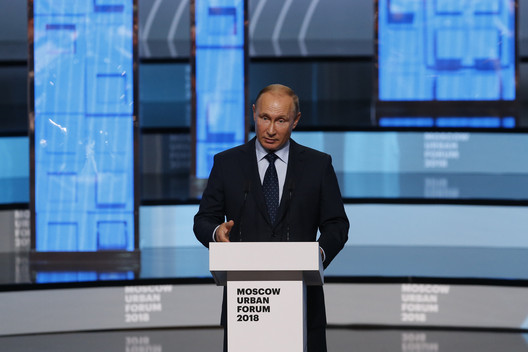