Russian practice Meganom has been announced as the winner in a competition to drastically transform the Moscow riverfront. Their masterplan proposal aims to create a series of linear green spaces, while also incorporating new cultural and education spaces along the waterfront and improving the surrounding public transport. Announced at the IV annual Moscow Urban Forum which opened earlier today, the goal of the competition was to return the Moscow river from a "barrier" into a "link" in the city, restoring its historical status as the city's heart and most important transportation route.

Read on after the break for more details of Meganom's masterplan 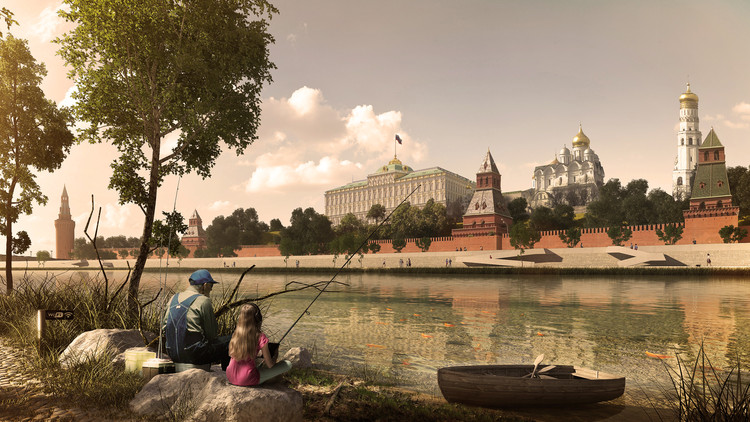 One of the key features of the masterplan is to improve transport facilities across, along, and around the Moscow River. Meganom's design includes a proposal to develop the infrastructure of local metro, bus, and tram routes and water transport, a network of active corridors to develop walking and cycling infrastructure both along and on the way to the river, and a series of ports which will connect the major nodes of their masterplan with a ferry and high-speed water transport.

The proposal aims to transform river embankments into public spaces along the length of the river, which offer space for communication and creativity, education, and cultural activities. On the Stroginskaya floodplain, for example, these linear green spaces will be punctuated by six sports and recreational "magnets" that serve as nodes at the river's key points.

The northern bank of the river will feature special green islands for the purification of water running off the floodplains, creating natural beaches in the center of the city. In the Mnevniki area, the northern bank will be reserved for a "modern, iconic building" that will serve as a gateway to a system of 10 parks and gardens, each with its own distinct character.

In the video below, Alfonso Vergara, a member of the jury from Fundacion Metropoli (Spain), explains how, through this winning entry, "Moscow can be a referent for other megacities in the world."

For more on the work of Meganom, check out ArchDaily's interview from 2014 Moscow Urban Forum.