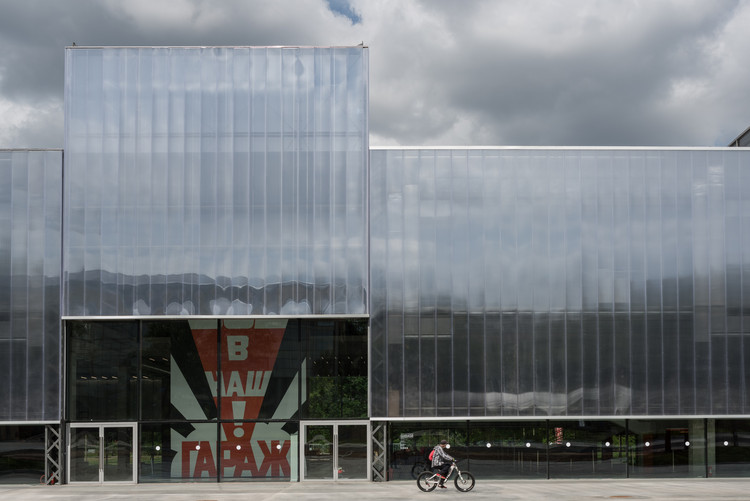 Text description provided by the architects. Garage Museum of Contemporary Art is a renovation of the 1960s Vremena Goda (Seasons of the Year) restaurant, a prefabricated concrete pavilion which has been derelict for more than two decades. OMA's design for the 5,400 m2 building includes exhibition galleries on two levels, a creative center for children, shop, café, auditorium, offices, and roof terrace. The design preserves original Soviet-era elements, including a mosaic wall, tiles, and brick, while incorporating a range of innovative architectural and curatorial devices.

Garage Museum of Contemporary Art was founded in 2008 at the Konstantin Melnikov designed Bakhmetievsky Bus Garage. Relocating from a semi-industrial neighborhood in the north of Moscow to one of the city's best known public spaces (Gorky Park), Garage will address a much larger and diversified audience.

Exposed to snow, rain, and sun since it was abandoned in the 1990s, the former Vremena Goda restaurant – once a popular destination in Gorky Park – has become a ruin without facades. Even as a ruin it preserves the "collective" aura of the Soviet era: it is a sober public space adorned with tiles, mosaics and bricks.

The building offers two levels of unobstructed open space that will be dedicated to exhibitions, organized around two circulation and service cores. museum programs occupy three levels, adapting to spatial and structural possibilities of the existing structure. The more fragmented spaces in the North Eastern part of the pavilion surrounding the main core primarily accommodate education and research programs. The large open spaces in the South Western part are dedicated to exhibitions, projects and events.

The building offers a wide range of interior conditions for the exhibition of art beyond the ubiquitous “white cube” and provides innovative curatorial possibilities, such as hinged white walls that can be folded down from the ceiling. They provide an instant white cube when an exhibition demands a more neutral environment, while the existing walls retain their brick and green tile cladding.

A 9x11-metre opening in the floor of the upper level creates a double height space (10 metres) for the lobby, allowing extra-large sculptures to be displayed. A public loop on the lower level will connect the bookshop, mediatheque, auditorium and a café, which is envisioned as an informal living room with Soviet era furniture.

The existing concrete structure is enclosed with a new translucent double layer polycarbonate façade that will accommodate a large portion of the building's ventilation equipment, allowing the exhibition spaces to remain free. The facade is lifted 2.25 metres from the ground in order to visually reconnect the pavilion's interior to the park.

The entrance to Garage Gorky Park is marked by two large facade panels that slide upwards to frame the art in the lobby's double height space and provide a view through the building from the park. 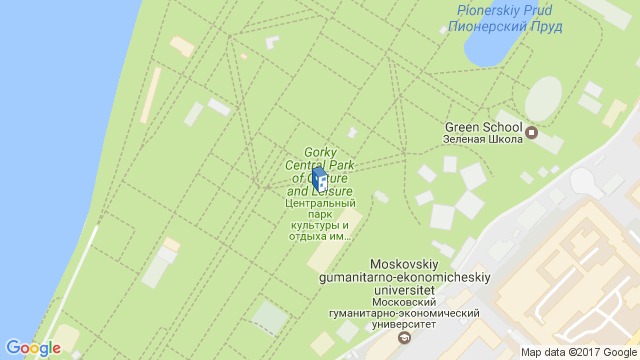 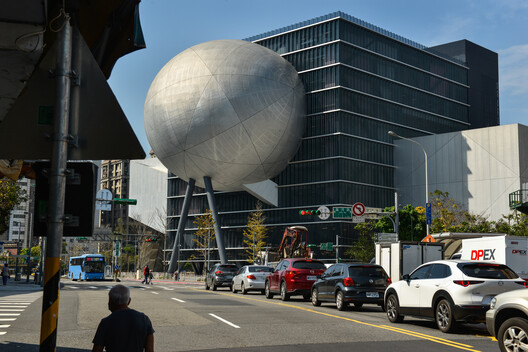 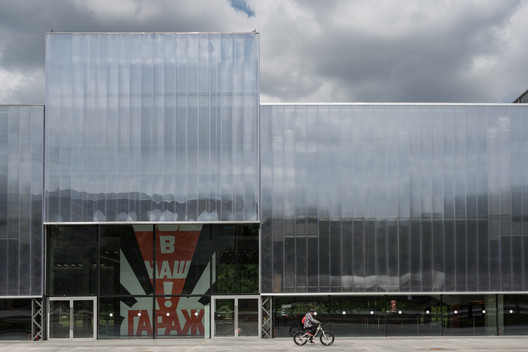