OMA has revealed plans for the renovation of the New Tretyakov Gallery on Krymsky Val in Moscow that will increase the accessibility and visibility of the gallery’s four sectors. Led by Rem Koolhaas, the scheme will use color and material to create a new visual identity and to establish a new link to the Moscow River. 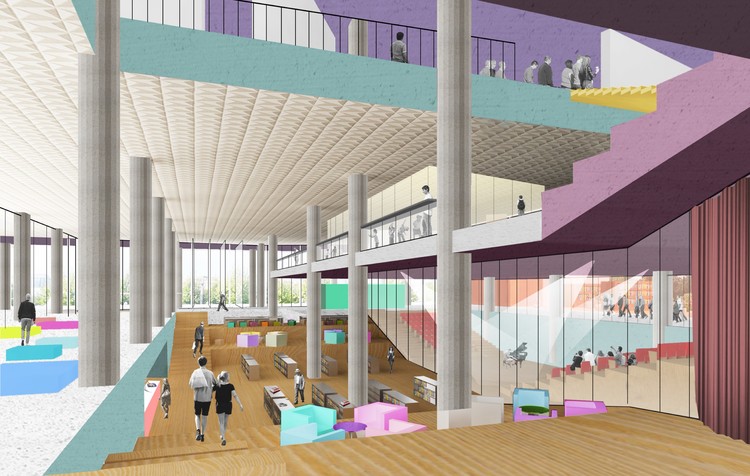 The largest museum building in Russia, the New Tretyakov displays one of the world’s largest and most significant collections of Russian art, including work from Malevich, Kandinsky, Chagall, and Soviet artists such as Aleksandr Deyneka and Vera Mukhina. The original building was designed in 1964 by N.P. Sukoyan and Y.N. Sheverdyaev and completed in 1983, with a total floor area of 61,091 square meters. Since then, it has been altered and added to, leaving grand exhibition spaces awkwardly fragmented by long hallways and clusters of support spaces.

OMA’s scheme will reorganize the complex into four sectors: Art Storage, an Education Center, the Collection, and a Festival Hall. Each sector will project its role through an individual identity, linked via a pedestrian circulation path along the Moscow River. Cutouts in the facade will connect interiors with the sky and the city.

“Our proposal is a reconsideration of the New Tretyakov, focusing on improving its spatial infrastructure and the elimination of dysfunctional parts,” said Rem Koolhaas. “We also undo the absolute separation between museum and the House of Artist, and remove a number of walls to make the different components more accessible and visible. Because of its size, it is almost impossible to consider it as a homogeneous entity; modern interventions unaffordable in Soviet times, such as escalators, improve circulation and draw together the different autonomous elements of the museum complex.”

The New Tretyakov Gallery represents OMA/AMO’s third cultural project in Russia, following a research study for the State Hermitage Museum in St. Petersburg and the Garage Museum of Contemporary Art in Moscow. 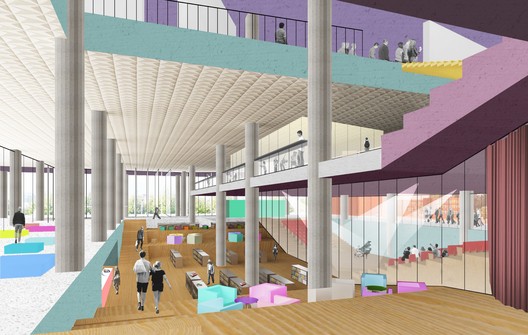