Save
Code of Context: The Uneasy Excitement of Global Practice
Share
Or
Copy

Global, the Winter 2014 issue of ArchitectureBoston magazine, out now, is an examination of the challenges and opportunities facing architects working abroad, from the Middle East to Africa to Asia. The topics explored in this issue include how to value resource-constrained approaches, honor local vernacular, and learn from the urbanization precedents set in other parts of the world. In this article, Jay Wickersham FAIA examines how in a globalized market, architecture firms can take steps to ensure that their designs act in the best interests of the foreign communities they affect.

The signs of architecture’s globalization are all around us. Foreign students flock to Boston to study architecture, prominent buildings are designed by foreign architects, American firms build practices around international projects. Globalization has allowed architects to work outside their own regions and cultures, at a scale and with a freedom of design they might never enjoy at home. But beneath the excitement and glamour of international practice, I sense an unease. Are we creating vital and original new architectures, or are we homogenizing cities and landscapes and obliterating regional differences? Are architects helping to strengthen and develop the economies of host communities, or are they acting as unwitting tools of inequality and repression? 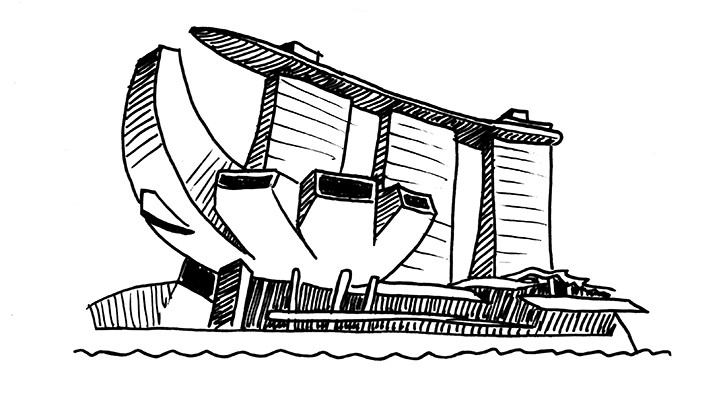 Before we tackle these questions, a brief look backward may help explain our current condition. The globalization of architecture is not new. Here in Boston, the architectural community was transformed by two European émigrés, Walter Gropius and Josep Lluís Sert, in their roles as teachers and practitioners. The firms they helped found, The Architects' Collaborative and Sert, Jackson & Associates, were designing projects all over the world from the 1950s onward.

In the last quarter century, changes in politics, economics, and technology have dramatically expanded and accelerated the process of globalization. The end of the Cold War and the creation of the World Trade Organization removed trade barriers and opened up enormous new markets to Western investors and architects. The transmission of digital designs via the Internet made it possible for architects to design large and complex buildings from the other side of the world, without having to set up a local office.

Here are a few illustrations of the resulting shifts in practice:

These unprecedented opportunities to practice abroad can give architects the chance to design with greater freedom, unencumbered by landmark and environmental codes and protesting neighbors. Should we rejoice, or worry, that today just about anything can be designed and built just about anywhere? What is the impact of globalization on design?

In 1984, architectural historian Kenneth Frampton pub­­lished a premonitory essay calling for a “critical regionalism.” Frampton worried that architects were no longer proposing new social models of community, becoming instead the tools of large-scale real estate development — designing new skyscrapers and shopping malls that looked like they could exist anywhere. Frampton called for “an architecture of resistance” that would fight back against this placeless, universal tendency of Modernism. He didn’t mean that architects should imitate preindustrial forms and ornament. He meant that they should develop a Modernism rooted in an understanding of regional ecologies and cultures, regional building materials and techniques.

Critics like Frampton tend to talk about homogenization in terms of appearance — the problem is that buildings in different countries and regions start to look the same. But it is hard to see how a foreign architect, spending a few days at the site of a new project, can ever develop the depth of historical and cultural knowledge of a place that could truly inform the design. It may be that our best protection against global homogenization lies not in the realm of the visual or the historical, but rather in the idea of sustainability.

Environmental design strategies have always shaped architectural cultures in very specific ways. There are good reasons why buildings in hot, dry places, for example, have been organized and built differently from those in temperate wet places. Even in the first half of the 20th century, much of the playful experimentation of modern architects was driven by responses to regional climates. Look at the solar orientations of European social housing from the 1920s. Look at the sunshades and breezeways of Le Corbusier’s work in the Mediterranean, Brazil, and India. Look at the lightweight, light-on-the-land houses of Paul Rudolph in Florida and Richard Neutra in California.

This ecological side of modern architecture has been neglected and largely forgotten in recent decades. Among the mixed blessings of globalization has been access to cheap fossil fuels and air conditioning — leading, in turn, to the worldwide spread of buildings designed as sleek, sealed, climate-controlled containers. We are slowly, painfully learning that this approach to design is no longer sustainable ecologically, financially, or ethically. Architects working abroad have a responsibility to study the ecology and climate of the site. This knowledge can inspire designs that respond to the character of a particular region and place. By focusing on a building’s environmental performance, an architect may achieve the visual and spatial sense of fit that Frampton was calling for.

Architects working abroad face a further challenge, perhaps even more complicated and confusing: making sense of the social and political context of the projects in which they are involved.

The AIA Code of Ethics says that architects “should uphold human rights in all their professional endeavors.” What does this mean for a project in a foreign country? What if the building is to be located on a site where poor residents were unfairly evicted, or a historic landmark was demolished? What if the building is for a repressive government agency? What if it is to be constructed by underpaid laborers, working under unsafe conditions and denied basic legal and political rights?

I’m not going to trivialize the ethical challenges of international practice by pretending that there are easy answers to these questions. An architect does not pick a project’s location or determine its use or control the pay and safety of the construction workers, so is it really fair to hold the architect responsible for these outcomes? Even in one’s own country, it can be hard enough to figure out the client’s real needs and desires, and decide whether a project is a good fit. Working abroad, the difficulties of getting good information are magnified. And the competitive pressures of the marketplace can be overwhelming. Practicing architecture at any scale requires a firm, and firms need a steady flow of new projects so they can keep their staff employed, pay the rent, and meet all the other demands of running a business.

But instead of ignoring these ethical questions and pretending that architects are apolitical artists or technicians, perhaps we can identify some ways to discuss and address them.

Architects do have professional choices. An architect is not like a court appointed lawyer who must defend an accused murderer, or a doctor who must treat every patient no matter how morally repugnant. An architect can always investigate a potential client and project, and either accept the commission or turn it down. There are international nonprofits, such as Human Rights Watch and Transparency International, that issue reliable reports on the status of civil liberties and political corruption in different countries.

Under certain circumstances, foreign architects can develop active partnerships with local designers and builders. A particularly inspiring model is the one developed by the medical nonprofit Partners in Health; it views the delivery of healthcare services in developing countries as an opportunity for economic development. The Boston-based architectural firm MASS Design Group has applied this model to projects in Rwanda and Haiti by finding ways to transfer skills and develop experience within the host community. Under this model of foreign practice, how the project is built, and by whom, is as important as the physical building itself.

And architects can act collectively. Since 2011 the international artists group Gulf Labor has been pressuring the Guggenheim Museum to improve workers’ conditions at the construction site for its new building in Abu Dhabi or else the artists have threatened to boycott exhibits at the museum. Architects could similarly work together, in informal groups or through organizations such as the AIA and Britain’s RIBA, to develop communal standards for global projects and practices that support international norms of human rights, and by which architects would agree to abide.

The globalization of architecture can feel like a runaway horse, beyond anyone’s control. But though we cannot stop change, we can try to steer it in certain directions. As architects debate these questions about design, sustainability, and ethics in international projects, we may start to define a shared set of principles and behaviors, which can help guide global practice in the future.

Jay Wickersham FAIA, an architect and lawyer, is an Associate Professor in Practice of Architecture at the Harvard Graduate School of Design (GSD). He is a founding partner in the Cambridge, MA law firm Noble & Wickersham LLP, which represents over 200 architectural and design firms around the US and worldwide.

If you enjoyed this, you can read more ArchitectureBoston articles on http://www.architects.org/architectureboston/global

Do you also want to contribute to ArchDaily? Let us know!