In Couplings, an article published in 1999, Beatriz Colomina argues that the phallic myth of the solo architect, the isolated genius, is one of the most regressive and reactionary understandings of architecture - but unfortunately still one of the most pervasive.

While partnerships such as that of Alison and Peter Smithson, Denise Scott Brown and Robert Venturi, Charles and Ray Eames, and Liz Diller and Ricardo Scofidio have gained notoriety for their work together, and the architects are often referred to inextricably, there are other examples in the history of architecture that clearly reveal the erasure of many female architects in favor of the rise of their husbands.

But even when these partnerships are known to be inseparable, there is still an element of injustice. Perhaps the most emblematic case is that of the Pritzker Prize awarded to Robert Venturi in 1991 for a career built together with Denise Scott Brown. At the time, the jury cited numerous projects completed with Scott Brown, in addition to citing her as his collaborator in the evolution of architectural practice and theory over the previous three decades. However, the award, considered the highest honor in the architectural field, was given only to him.

Ray Eames, who worked alongside her husband Charles on artistic, architectural, and furniture projects, has also been erased throughout her life, failing to be acknowledged at times by institutions such as MoMA, the New York Times, and Harvard University, as Colomina points out in her text.

While injustices and invisibilization still happen in architecture firms co-managed by couples, an erasure even more striking can be observed in cases of star architects famously recognized as single figures. In such cases, many of the female architects are often cited indirectly through their husbands, seldom the other way around, such as Aino and Elissa with Alvar Aalto or Delfina Gálvez and Amancio Williams.

Other female architects such as Lilly Reich, Charlotte Perriand, Eileen Gray, and Marion Mahony, who were not married to the great male figures of architecture with whom they collaborated, also often appear in the background. While Mies van der Rohe, Le Corbusier, and Frank Lloyd Wright have historically assumed the roles of great stars of architecture, acknowledged by their entire work as individuals, the female architects who collaborated on the projects have been left out. Mahony, the first woman to be licensed to practice architecture in Illinois, United States, is responsible for the drawings people think of when they think of Frank Lloyd Wright. But, whereas male architects have become recognized worldwide as individuals, female architects' names still seem unknown or are always associated with the men with whom they collaborated.

In the early 20th century, many "women found a way into the field of architecture by collaborating with their husbands", states Argentinian architect Inés Toscano, founder of the Couplings' Tactic project. Lin Huiyin (1904-1955) - a pioneer in the documentation of Chinese architectural heritage in the 1930s, alongside her husband Liang Sicheng (1901-1972) - was not admitted to the University of Pennsylvania School of Architecture because at the time it was considered inappropriate for young women to work with young men late into the night, unsupervised. While Lin graduated in fine arts, Liang pursued a degree in architecture, but they always worked together as architectural historians and became China's best-known preservationists.

The Couplings' Tactic project is an initiative to critically map architectural couplings as a labour strategy towards gender equality in architecture and has already mapped 395 couplings across the world since 1880. Through survey and mapping, the research raises questions concerning the intimate and creative collaboration behind the architectural legacy of great names in architecture, in a quest to re-examine the star system.

By investigating cooperation in the work of architectural couplings - which are or were not always western and heterosexual - can be a way to address the profession's disparities on many levels, states Inés Toscano. By understanding architecture as a product of cooperation, the architect says that the field opens up to new interpretations from the perspective of collaboration, cross-disciplinary exchange, diversity, and tolerance. 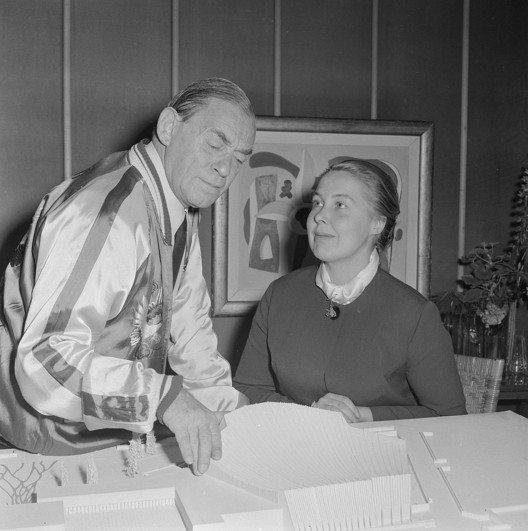