✕
Save
A Rural School in Haiti and an Indian Community Center for Women: 12 Unbuilt Projects Submitted by our Readers
Share
Or
Copy

Read on to discover 12 selected projects presented in international competitions, showcasing a variety of functions with their descriptions from the architects.

Karres en Brands wins international competition to design Norway’s National Logging Museum and Competence Center for Wetlands. Situated 30 minutes from Oslo, on Northern Europe's largest inland delta, on the banks of the Glomma, the Museum will be Norway's foremost destination for cultural and natural heritage. With the aim of raising awareness of how valuable wetlands are, both as a habitat for plants and animals and as an important natural resource for humans. Central to the design of Karres en Brands is the concept of celebrating and elevating the unique delta environment of Fedsund, with its strong relationship between people and water. The proposal approaches building as a landscape focusing on framing nature and generating spaces for interaction rather than iconic architecture.

The new city hall project will be a space that produces symbols, rather than a symbol that produces space. It shall be a ‘void’ in this congested town, large enough to bring all together. It is a place, not an object. It is ceremonial yet informal. It desires occupation, in the most creative and perhaps inappropriate ways. It provokes ideas and actions. This is the new core for Cheongju, one with a thousand beating hearts.

Our proposal for the new National Concert hall is a collection of moments analogous to the City of Vilnius. Rather than create a singular monolith, we fragmented individual parts of the program, giving each its own expression and weaving “streets” into this assemblage. Our aim is to design a concert hall that creates a new public space for the city and is part of a network of cultural institutions that connect Old town to the riverfront.

Before starting the spatial design of the project area, the accessibility fiction in the urban memory track was discussed together with the environment of the area. The proposed project is shaped over the idea of a cultural route in order to recognize and adopt the situation of Bakırköy in touch with history by the citizens and to make it a part of the normal flow of daily life.

The design carefully considers the project's future goals of providing economic opportunities for women at risk of human trafficking. Our proposal seeks to integrate women into the broader community using the site as the locus for creating events and activities beyond training and becoming a hub for the larger context. Functional and purpose-driven yet evocative and familiar, our design integrates vernacular typologies, building technologies, with local materials and crafts.

wUrck wins design competition for Daniel den Hoedbrug in Rotterdam, the Netherlands: a footbridge in the Rotterdam center crosses over Gravendijkswal, a protected monumental urban boulevard. The two bridgeheads are carefully calibrated within the context: the Erasmus Medical Center on the east side and the Little C high-density residential development on the west. The bridge materialization is sustainable, circular, and welcomes urban fauna – birds, bats, and bees. The bridge is named after the pioneering cancer-research doctor Daniel den Hoed whose name and portrait decorate the landings.

The competition result for Shennong Valley Visitor Center was announced on September 21st. OAID was awarded the first prize from the nine proposals submitted. The future facility is scheduled to open in October 2021. OAID’s proposal focuses on adapting traditional Chinese wood tectonics to contemporary programs while seeking a nuanced balance between the old and new. The proposal also delves into the cultural background of the Shennongjia Region, featuring local elements such as wood scaffolding, bull horns, and upturned eaves.

Zbraslav square is too big and undefined in its current condition. It needs the introduction of a human scale and a better definition of its main square, while a set of activities and green pockets may unfold and wrap around it. The new condition offers a strong identity and functional solution that can engage the local residents and provide them with a feeling of belonging. The square fulfills the expectation for an urban and metropolitan layout that can accommodate large events, while at the same time it responds to the local character of Zbraslav and adds to its historic and austere character.

In our proposal to a competition of PENTA Real Estate for a residential building in Prague different kinds of apartments invite different people to live in and for that, we created different architectural layouts and qualities. Hence this residential building aimed to provide the diversity of living conditions that habitants could experience. The purpose was to make a significant difference between these conditions, in the term of the spatial qualities of the apartments, and in term of these apartments’ relations to the inner circulation of the building and to the surrounding urban environment.

In the competition specifications, there is no exact city specified for the idea project. The parcel which was selected the new settlement areas in Turkey's Southeastern Anatolia region was shared designers by Administration. The designer was expected to take into account the topography, climate, and environmental conditions. In addition, in the question and answer part, the designer was expected to determine their design approach over a province they would choose in the Southeast Anatolia region. Dating back to the Paleolithic period, Mardin bears traces of many civilizations in its built environment.

This project is a selected entry in an international competition meant for the construction of a rural school for the TE NWA community, north of Port-au-Prince, Haiti. The project intends to meet many social, constructive, and economic challenges while proposing a design that improves the educational conditions of rural Haiti. This school includes 7 levels of classes that benefit more than 50 children in the community. Presently, a tent houses the daycare, and a classroom made of plywood panels serves as a school. The intended program proposes two phases of construction and exterior design.

In Jazmurian Cultural Museum project, the main volume has been designed as a building to create a symbol and a minimal volume that emphasizes simplicity and purity (which is one of the main features of the region's culture). The texture created with the materials and facades is according to the climatic and indigenous architecture of the region and the glass-work section also emphasizes the transparency of the project. 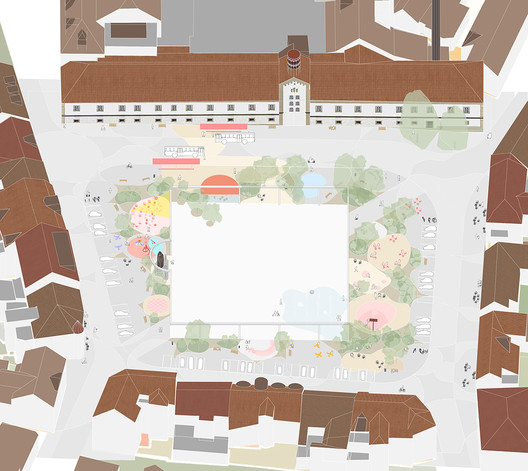