Save
The Convergence of People, Cities, Nature, and Technology: A Review of the Shenzhen Biennale
Share
Or
Copy

December 22nd, 2019 saw the public opening of the 8th Bi-City Biennale of Urbanism\Architecture (UABB) in Shenzhen, China. As the world’s most visited architecture exhibition, the Biennale forms an influential moment for the dissemination of architectural knowledge, and the generation of dialogue and feedback loops between designers and citizens. Titled “Urban Interactions”, the Biennale's 2019 edition sets its sights on the multifaceted question of how technological advancements will impact the relationships cities share with people, technology, nature, and each other. 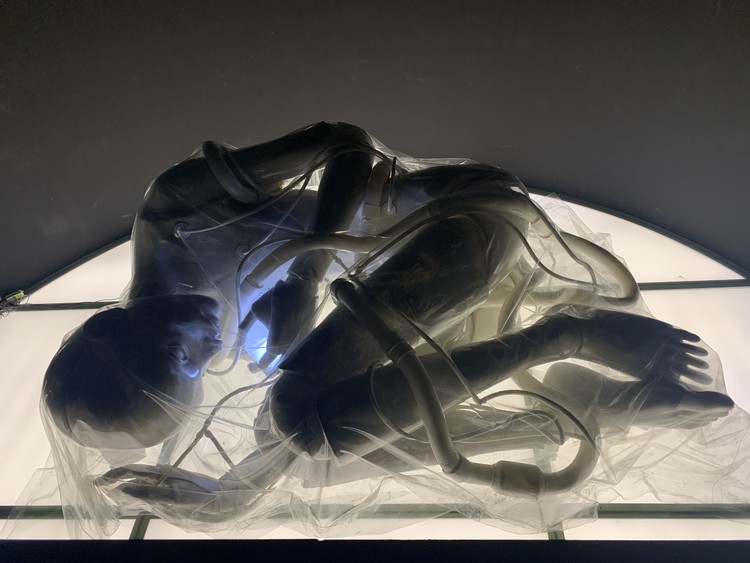 Before the Biennale: Setting the Scene

The Biennale's “Urban Interactions” theme was divided into two parts. The “Ascending City” section was curated by a team headed by Meng Jianmin and Fabio Cavallucci, and based at the Museum of Contemporary Art and Planning (MOCAUP) in Shenzhen. Here, it sought to investigate the relationship between technology and people, cities and architects, and reality and fiction. Meanwhile, the “Eyes of the City” section was curated by Carlo Ratti and South China-Torino Lab, located in the Futian Railway Station. Ratti's team explored how artificial intelligence may impact architecture and daily life at a time when cities are acquiring the ability to interact with citizens.

Speaking to ArchDaily before the event, Ratti reflected on the focus the curatorial team shared on the convergence of natural and artificial worlds, and the appropriateness of Shenzhen as the Biennale location, given its dual-identity as both an “innovation lab” and a “factory of the world.”

Before the Biennale ever began construction (notably only using materials sourced from Shenzhen), the questions posed by “Urban Interactions” had already triggered the imaginations and reflections of designers and theorists around the world. To showcase this, ArchDaily worked with the curators of the Biennale to publish a diverse, thought-provoking collection of written responses to the “Eyes of the City” section.

Among the highlights, all of which can be seen here, were Antoine Picon’s reflection on how the “Eyes of the City” mission relates to Jane Jacob’s concept of “Eyes on the Street” and Deyan Sudjic’s question of how cities retain their traditional allure of anonymity in a digital era. Meanwhile, Mitchell Joachim posed the question of how cities can repair their connection with the natural world, while J. Meejin Yoon asked a similar question in relation to rural landscapes.

During the Biennale: A Symphony of Innovation and Speculation

Before the Biennale opened to the public, ArchDaily was among a group of organizations offered a tour of the venues. At MOCAUP, the “Ascending City” is divided into 3 sub-sections. The “Empowering Citizens in Progressive Cities” subsection explores the city from the perspective of citizens. Highlights include an intriguing audiovisual installation by Japanese artist Ryoji Ikeda titled data.matrix [no1-10] aimed at making streams of data audible and visible to citizens.

The “Urban Alchemists” subsection reflects on the transformation of the city through the lens of architects, artists, and urban planners. Anchoring the exhibit is Sou Fujimoto’s “Individual Furniture” comprising 239 pieces of furniture arranged as a tall structure. Meanwhile, Wang Jianguo’s “Pan-dimensional City” represents a new way of understanding urban design development while “Manufacturing Human” by Wang Zigeng asks the question of “what are human beings?” in this new age.

The “Daily Sci-Fi” subsection sees architects, artists, and creators invited to create utopian and dystopian urban visions. Highlights include Liam Young’s “Last Home” centered on the celebration of the lunar New Year in a vertical city, and “Beasts, Men & Bits/Liminal [Post-Digital-Age Curiosity Cabinet]” by New-Territories, presenting a physical and mental environment where viewers enter a “Pandora’s Box” of overlapping realities and non-realities.

Across the city at the Futian Railway Station, Carlo Ratti and South China-Torino Lab’s “Eyes of the City” section represents a unique challenge for the curatorial team: how to transplant the Biennale into the alien setting of a major transport infrastructure node. Ratti’s response was to evoke the idea of a “Duty-Free” where unsuspecting visitors passing through the station meander through a series of visions, critiques, and celebrations of the marriage of urbanism and technology.

Upon approach, the most striking element of Ratti’s ensemble is a 1-kilometer-long infographic visualization by Northeastern University professor Paolo Ciuccarelli, which tells the story of the “open source” curatorial process for the exhibition. Inside, over 5,000 square meters of space has become one of Asia’s largest mobility hubs: an embodiment of the changing nature of stations in a digitally augmented city.

Meandering through the station’s “Duty-Free” guided by the graphics of Dutch designer Mieke Gerritzen, visitors encounter a range of installations offering insights into the future of urban life. Highlights include “Nomadic Wood (Looking)” by Tongji University professor Philip F. Yuan, which forms a twisted digital periscope allowing viewers to roam beyond the limitation of time and space, and “MVRDV and Airbus’ “City and The Sky Above” which allows visitors to explore the new boundary between city and sky.

During the Biennale: Marathon Talks

Saturday 21st December saw a panel discussion with the four curators of the Biennale, chaired by Ole Bouman, and held at the MOCAUP’s spectacular Cloud Platform. Here, Ratti reflected on the many collaborations developed during the “Eyes of the City.” Working with the Fab Foundation, the blueprints for many exhibits have been made open source under a CC license for their replication and appropriation across the world. Inside Futian Station, the team also collaborated with MVRDV and Cooper Union on an opt-out facial recognition system, generating new opportunities to think critically about the ubiquitous system.

The experience of the “Eyes of the City” was further elaborated by Ratti’s co-curator Michele Bonino, who described the open call process for the Biennale. More than 280 multidisciplinary applicants responded to the open call from four continents. In another milestone, the 2019 edition of the Biennale is the first to incorporate an educational institution (South China-Torino Lab) as a co-curator, transforming the exhibition into an incubator for ideas, and an opportunity for further research.

“Ascending City” curator Fabio Cavallucci used the conference to highlight how humanity is facing its third major revolution. From the invention of language over 70,000 years ago, and the transition from nomadic to agricultural societies 12,000 years ago, Cavallucci argued that the rapid development of technology represents the next major shift in how societies live and operate, dwarfing the often-cited industrial revolutions of the 19th and 20th centuries.

Cavallucci was followed by fellow “Ascending City” curator Jianmin Meng, who reflected on the challenges faced by those involved in urban development. He warned that urban planning has lagged behind the rapid increase in technological innovation. Rather than depending on past experiences for the development of future cities, he advocates that architects and urbanists must adopt more innovative means for envisioning the future of urbanism.

The seminar between the curators marked the beginning of a series of Marathon Talks, with experts from across the world converging to share their perspectives on the theme of “Urban Interactions.” Highlights included a talk by Cambridge professor Francois Penz, who reflected on the cultural forces that shaped the development of perspective drawing from the European Renaissance onwards. Meanwhile, speculative architect Liam Young presented a series of films focusing on the effect of emerging technologies on cities, including his Seoul Machine City film which speculated on the future interaction between citizens and the urban fabric.

The final Marathon Talk featured a presentation by acclaimed Japanese architect Sou Fujimoto, whose “Nature and Architecture” theme reflected on his firm’s history of producing architecture that integrates with the natural world, including his 2013 Serpentine Pavilion. Central to Fujimoto’s talk was the message that, as the technological possibilities inherent in architecture grows, architects and designers have gained the ability to create alluring environments that offer similar atmospheres to that of nature. He concluded that an understanding and appreciation of natural processes must form a pillar of architectural design even as technological boundaries are pushed.

After the Biennale: Legacies and Futures

As “Ascending City” curator Fabio Cavallucci identified during the curators discussion at the Biennale opening, it is still too soon to predict the legacy of the 2019 Shenzhen Biennale. The event does, however, mark a series of departures from the traditional format of a Biennale. While many architecture exhibitions center on the showcasing of contemporary design trends, the Shenzhen Biennale has always used its platform to permanently enhance the urban context in which it is hosted.

For Carlo Ratti’s exhibition at the Futian Railway Station, the traditional Shenzhen Biennale legacy of urban regeneration required a revision. Instead, the 2019 edition of the Biennale may see its legacy in the interaction it offered to hundreds of thousands of daily commuters who became what Ole Bouman termed “accidental visitors.” These everyday commuters, many with no predisposed interest in architecture and urbanism, will be exposed to the possibilities and pitfalls of future urban development by the architectural “Duty Free” laid out before them, thus establishing the feedback loops advocated by Ratti throughout the Biennale discourse.

The materials exhibited at the 2019 Shenzhen Biennale raise many possible futures for technology in urban life. Reflecting on the Biennale, it is apparent that the challenges and opportunities created by these emerging technologies are profound. However, one can look at the Biennale with an optimism that despite the challenges we face, architects and designers are more than willing to look confidently into the eyes of future cities, and speak back.

The Bi-City Biennale on Urbanism\Architecture (Shenzhen) will be open through March 2020. For more information, browse our Biennale coverage here. 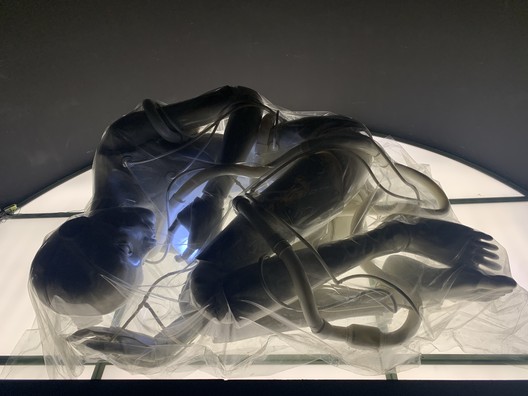