Save
Is the Internet Bringing Us to the Middle Ages? / Deyan Sudjic's Response to the Curatorial Statement of the Shenzhen Biennale(UABB) 2019
Share
Or
Copy

Without the city, modernity could never have been invented.  What we are in the midst of discovering now is whether modernity can survive in a city transformed by the digital revolution. The village may offer security and community, but what it does not allow its inhabitants is the possibility of being different, a phenomenon that is as true now as it was during the witch-burning era.

At its best, the city allows for difference and for tolerance. That is what made and still makes the city such a powerful magnet for the ambitious and the creative, the poor and the desperate. To walk into a bar, or a store, to rent a room, or buy a book, or log onto the web, without having anyone know who you are, is a precious, and essentially modern, a privilege that some of us have been fortunate enough to be able to expect as a right.

The possibility of anonymity is one of the most important qualities that differentiate a city from a village. It is precisely these qualities that are being challenged by the digital revolution.

The social media explosion, and the universal adoption of the smartphone, delivered just 12 years ago by Steve Jobs to a largely uncomprehending world, were promised as the next steps in modernity, but have turned out to be pushing the world back into a premodern condition. Twitter was meant to overthrow the autocracies of the Middle East, but has taken us back to the Middle Ages with the digital lynch mob; and the return of ancient superstitions about vaccines and prejudices against outsiders have reappeared in a new age of unreason.

Yet this “village” condition was one that Jane Jacobs celebrated so powerfully in The Death and Life of Great American Cities in 1961, perhaps the first genuinely popular book on city planning since Ebenezer Howard’s cranky-looking pamphlet on garden cities, and not so much a defense of the city, as a misunderstanding of the essential quality of “cityness.”

Jacobs set out to slay what she saw as the double-headed demon of urban planning, combining Howard and Le Corbusier – two vastly different and mutually antagonistic thinkers – into a single entity. Howard believed in drastically lowering the density of existing cities. Le Corbusier believed just the reverse, yet to Jacobs they had both “set spinning powerful, city-destroying ideas.”

By helping to mobilize the residents of a rapidly gentrifying Lower Manhattan, she played her part in stopping plans for a highway across the city. But stopping Robert Moses had the unintended consequence of making the area safe for newcomers to invest in.

Her message, at heart, was simple.  She had taken over a rundown home in West Greenwich Village and, along with her architect husband and their three children, had returned it to middle-class comfort. She did not want that changed by a new six-lane road.

Clearly, she enjoyed the life of Hudson Street, with its delicatessens and bars, its familiar grocery store with its friendly, but not too friendly proprietor ready to look after her front door keys but not to pry into the details of her domestic arrangements. But beyond the nostalgia for these intimate charms, much of her writing reflects the sense of threat that she feels coming from the city. She could sound like a pioneer from the old West, guarding her homestead in hostile territory.

Her description of what she calls the daily ballet of the Hudson Street sidewalk celebrates “the allies whose eyes help us natives keep the peace of the street.” Despite her ostensible celebration of diversity and community, the underlying message is closer to paranoia. She identified what she called the birds of passage who would not help defend the stockade. She disapproved of them with all the strong silent scorn of John Wayne in Stagecoach contemptuously dismissing a lily-livered carpet bagger.

A city policed by number-plate and facial recognition systems, kept moving by car-share schemes, and crowd monitoring on the underground network, and contactless payment systems that track every journey taken on every bus and metro line in a city, may or may not represent the “allies” that Jacobs would have called on for help to keep the peace in Greenwich Village.

We may be able to tame the power of the social media empires of our times, as the robber barons of steel and rail were once tamed, but an even more necessary priority is to find ways in which we can use the potential of the digital to reverse our retreat from modernity.

Can we, for example, make do without physical public spaces if we have a digital substitute? Andrés Jaque looked at the impact of location-based apps in a work he made for the Design Museum that he titled Intimate Strangers. Technology similar to the one that allows the Pentagon to order a pinpoint drone strike, can allow two strangers to decide to meet, and immediately find each other in a crowded city. Jaque’s focus was on Grindr. He looked at the way that what was first conceived as a dating app had been used by Syrian refugees with the help of sympathetic strangers to navigate their way across Europe, and through the squalor of the Jungle, the camp outside Calais, to wait for the chance of reaching Britain. He explored steps taken by its founders to introduce a measure of security for its users, to protect them from entrapment. And he asked questions about the future of social interaction for people of all sexualities when the physical world is replaced by avatars on a smartphone screen. The shopping mall and the department store are already menaced by internet retailing. What is online dating doing to the night time economy?

The rise of AirBnB has transformed tourism and the hotel industry and is now having a substantial impact on the wider housing market by flooding the streets with the “birds of a feather” that Jane Jacobs despised, and who have turned out to be even more destructive in their effects than she feared, raising rents and injecting large numbers of temporary visitors with no stake in the community.

While the smartphone abolishes the idea of privacy, we need to find ways of using technology to restore some of the essential qualities of the city. Bitcoin might offer a model for what might be a contemporary version of anonymity. In urbanistic terms, if the impact of digital development is to undermine the physical city, the Internet, which, in a way that is analogous to all authentic physical cities, has both its light, and its dark side, must step up to the plate, and stand in as the new public realm. Crime and vice hover at the edges of virtual space, which also encompasses the great free library that is Wikipedia, the explosion of online archives and the market stalls that are open source designs. It has become a polyglot mix of the inspirational and the banal. Meanwhile, Twitter is the twenty-first-century equivalent of the lavatory wall, a place for the scurrilous and the anonymous to leave their mark, combined, if we are being generous, with an electronic version of a democracy wall. To offer a way of life that offers as much as the old city did, the digital realm must retain enough of the fundamental values of “cityness,” and find new ways to provide them.

Deyan Sudjic has been the director of the Design Museum since 2006. He was the founding editor of Blueprint magazine, he edited Domus in Milan and he was the director of the Venice Architecture Biennale in 2002. He has curated exhibitions in Istanbul, Copenhagen, London and Glasgow. His most recent book, The Language of Cities, has been published in five languages.

NewsArticlesShenzhenCarlo Ratti AssociatiBiennialsChinaShenzhen 2019 Bi-City Biennale
Cite: Deyan Sudjic. "Is the Internet Bringing Us to the Middle Ages? / Deyan Sudjic's Response to the Curatorial Statement of the Shenzhen Biennale(UABB) 2019" 16 May 2019. ArchDaily. Accessed . <https://www.archdaily.com/917019/is-the-internet-bringing-us-to-the-middle-ages-deyan-sudjics-response-to-the-curatorial-statement-of-the-shenzhen-biennale-uabb-2019> ISSN 0719-8884
Save 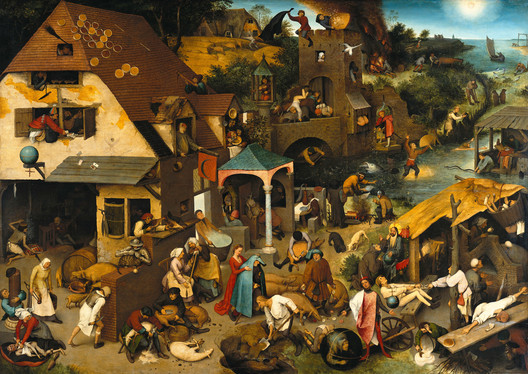