Carlo Ratti can be considered one of the great architectural innovators of our time. The founder of Carlo Ratti Associati, and Director at the MIT Senseable City Lab, Ratti champions the power of new technologies to transform both how we live, and how we design. The act of “convergence” is central to Ratti’s architectural outlook, whether it be the convergence of bits and atoms, or natural and artificial, or human and technology. Moreover, he believes that this convergence can reframe the design process, and engage citizens in discussions on what kind of city they want to live in. 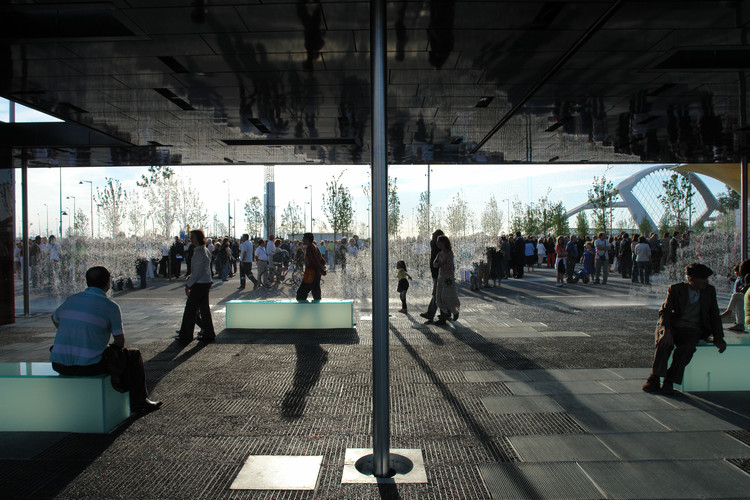 It is fitting, therefore, that Ratti was chosen to curate the 2019 Bi-City Biennale of Urbanism\Architecture (Shenzhen). Alongside Meng Jianmin and Fabio Cavallucci, and the Biennale’s Academic Curators, Politecnico di Torino and SCUT (South China-Torino Collaboration), Carlo Ratti Associati will coordinate the world’s only Biennale devoted exclusively to the themes of urbanism and urbanization.

In this interview, Ratti speaks with ArchDaily's Niall Patrick Walsh about the Biennale, as well as its underlying theme of architectural innovation. He reflects on the importance of discussing the role of technology in the design and operation of cities, the convergence of the natural and artificial, and the dialogue between the Biennale’s two thematic sections. For more information on the UABB 2019, visit the official website here, or browse our dedicated landing page, containing several fascinating essay submissions along the theme of innovation in architecture.

Carlo Ratti: In general, we are passionate about the convergence of the natural and artificial world. Traditionally people have looked at how the natural can hybridize with the artificial and cyberculture. For the Biennale, similar to the MIT Senseable City Lab and our design office, we are passionate about how the artificial, the world of buildings and cities, can hybridize with the natural. Innovative technologies are a big part of that, so that was one avenue of exploration. We also reflected on Shenzhen. From one aspect, it is a place where substantial urban fabric has been built, epitomizing the idea of an “instant city” and the giant construction boom happening in China right now. In fact, in this century, China might build more urban fabric than all of humanity has ever built before. Shenzhen is therefore a “lab” of sorts, where innovations can be experimented upon in physical space. On the other hand, Shenzhen is an innovative factory where many technologies and products are being created and used around the world. It therefore seems quite logical to use Shenzhen as a place to explore such topics in the Biennale.

AD: The Bi-City Biennale of Urbanism/Architecture is unique when compared to other Biennials, given it is devoted exclusively to the theme of urbanism and urbanization. Having been involved in curating the event, do you believe these unique circumstances create a more focused debate?

CR: As architects, we are in a very interesting moment, where advances in technology mean we can achieve this hybridization of artificial and natural. Buildings and space have, for the first time, acquired the ability to sense and respond to life occurring inside of them. It is a new condition, similar to what happened one hundred years ago when material advances brought forth a new way of architectural expression with the modern movement. Back then, the “machine civilization” found its own architectural expression most notably through the works of Le Corbusier. Today, we are at a similar point, where physical space is acquiring the potential to respond to its surroundings like a living being. So, while it seems more focused than other topics, this innovation has such profound implications that I think we will see a large variety of proposals in the Biennale.

CR: Until recently, architecture has not advanced very quickly. In 2016, a report was produced by McKinsey which analyzed how rapidly different sectors were adapting to speeds of change in technology. Real estate was at the bottom, along with hunting and farming. But things have started to change quite fast. For example, five years ago at the annual MIPIM real estate conference in Canne, the discussion about new technologies and city-making was in a small pavilion called the Gare Maritime, outside of the main venue. But for the past couple of years, it was the core of the main venue. The rate of change is really increasing, so I see this as the beginning of something that is going to inject into architecture a rapid transformation that we have seen so far in other fields.

AD: While you are curating the “Eyes of the City Section” of the Biennale, the “Ascending City Section” will also examine themes familiar to your work at the MIT Senseable City Lab, such as the “top-down and bottom-up” possibilities for future urban design. How would you describe the relationship between these two sections of the Biennale?

CR: There were a number of proposals, and the jury ultimately chose our proposal as well as the Ascending City proposal, then they asked us to combine them. It is a similar process to masterplanning, where different ideas are taken and extracted from one proposal and merged with another. Interestingly, this combination has been working quite well. In the Ascending City part, the focus is more on predicting and imagining the future, and examining how different trends can unfold. For example, there is a lot of science fiction involved in that section of the Biennale. From our side, we are very excited about the potential of the present, and how we can transform the present in order to move towards a future we will all benefit from. So from that point of view, our side also shares a “top-down, bottom-up” approach. Our process was “bottom-up” in the sense that alongside our foundational curators, we had an open call. We received hundreds of submissions which will be presented in Biennale, and a select few to be published online. This form of “filtered bottom-up” is a useful way of taking a topic, generating a discussion, and through that, being able to decide what type of city we want.

From a methodological point of view, we see this as quite interesting versus the process of architecture and urban planning in the 20th century. In the 20th century, the idea was that there was one solution, and every other role was geared towards implementing it. A strong example is Le Corbusier’s vision for Paris, where the old city would be demolished and replaced with Modernist towers without any type of feedback or other involvement from the population. I believe that the role of architecture should be very different today. We have the opportunity to speculate about possible transformations, use design as a way to start a conversation, and through feedback loops, we can decide together what type of city we want to build.

AD: The Biennale has historically acted as a geographical anchor, allowing designers and creators to converge in a singular place. After the Biennale concludes, how do you plan on sharing the conclusions, hypotheses, and suggestions from the event to the wider world?

CR: The legacy of the Shenzhen Biennale in interesting, as historically it has taken a piece of the city and transformed it. Hence the Biennale has been a tool for exploring architectural ideas, but also for leaving an architectural legacy for the city. This year was a bit more difficult because we are in a place that was recently built; a new station in Futian where the high-speed rail connection arrives from Hong Kong. The issue with the station is that most people exit to a sunken plaza on the lower ground level that has no connection with the city. For the Biennale, some of the installations in the plaza will seek to address this issue, with key installations staying later. Some of the legacy will therefore be the transformation of this place and its reconnection with the city.

There is also a human aspect. Instead of being given a beautiful concrete silo or industrial building to be converted like in past Biennales, we were given this active node, a place where millions of people traveling between Shenzhen and Hong Kong will pass through. So we designed the Biennale like a giant duty-free and used this to engage in a conversation with the millions of people passing through the station, exposing them to the discussions that may open up new ways of thinking. Then, of course, there is a reflective catalog after the Biennale, where many works will be collected, as well as the online aspect. Even the contributing pieces published by ArchDaily is another example of how the ideas will stay in the public domain long after the event.

AD: At the end of your book ”The City of Tomorrow: Sensors, Networks, Hackers, and the Future of Urban Life” you say “open data and platforms are as valuable to a smart, living city as accessible and open public space is to a traditional city.” With citizens having more control in the design and operation of their cities, do you believe the role of the architect must change?

CR: Before we wrote "City of Tomorrow", we actually published another book called “Open Source Architecture” which was written in a deeply collaborative way with a number of people. We say that the architect will become the “conductor,” somebody who is coordinating the design and construction process. It is an important task, particularly for project delivery and phasing. The future architect could be one who brings all these feedback loops from people, nature, and data, and create a richer design process. It is very different from what we saw in the 20th century, and the idea of the singular individual making every decision. It is now more about being able to harmonize different voices, such as users and the community at large. It is similar to what happens in nature. The evolutionary process takes a design, changes it slightly, sees how the system reacts, and then in the next generation, random changes occur and are sometimes adapted for the next iteration. I believe we need to learn from that in how we design buildings and cities.

AD: Given your experience studying smart cities in the United States, Europe, and Asia, do you see a difference in how these parts of the world each embrace the integration of data and technology in cities?

CR: Many cities around the world are aware of the potential for this approach, and are experimenting in different directions. For example, Singapore is experimenting with mobility. Milan is experimenting with different ways of bringing nature into the city. Boston has a project called New Urban Mechanics that looks at citizen participation. Helsinki has been looking a lot at energy optimization and efficiency. The fact that many cities are exploring different angles is a positive phenomenon, as it creates a rich, diverse innovation ecosystem that is sprouting up all around the world.

AD: Do you have any final reflections on the Biennale or its theme that you would like to share with our readers?

CR: As well as the works set to be displayed at the Biennale in Shenzhen, and the ideas to be generated, there is already a tremendous volume of contributions that we are collecting. We see this as an open process, the beginning of a conversation that will continue long after the Biennale, and will ultimately allow us to collectively decide what kind of city we want to live in tomorrow. 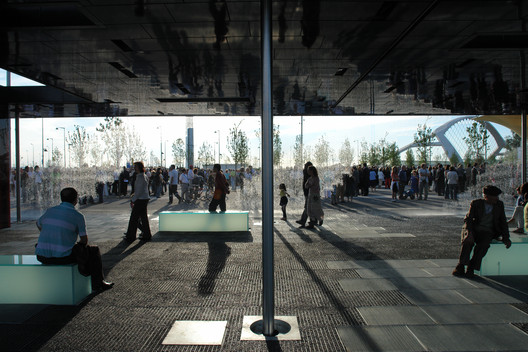