The Renzo Piano Building Workshop (RPBW) was established in 1981 by Pritzker Prize laureate Renzo Piano. With offices in Italy, France, and recently New York, RPBW has completed more than 140 projects around the world. Some notable projects include the Centre Georges Pompidou in Paris, the New York Times Building in New York, The Shard in London, and the Kansaï International Airport Terminal Building in Osaka. Partners Antoine Chaaya (born in Lebanon) and Joost Moolhuijzen (born in the Netherlands) have been architects at RPBW for more than 20 years, leading several projects all over the globe. Chaaya is an honorary member at the Lebanese Green Buildings Council (LGBC) and has lectured in France, Italy, Denmark, Lebanon and the USA. He was appointed member of the RPBW board in 2014. Moolhuijzen was the partner in charge, from inception to completion, of the Shard in London, and is now responsible for the Fubon Headquarters & Museum tower in Taipei, the Anse du Portier project in Monaco, as well as three projects in London, including the Shard Place and the Paddington Square. He was appointed member of the board in 2011.

Following are the videos and selected quotes from the interviews of Antoine Chaaya and Joost Moolhuijzen.

Antoine Chaaya and Joost Moolhuijzen talk about their education and how their interest in Piano's work inspired them to join his office. The architects describe the office's environment at the time and how working there changed the way they perceive architecture.

Past, Present, Future - PAST. Interview with Antoine Chaaya and Joost Moolhuijzen from Itinerant Office on Vimeo

GIANPIERO VENTURINI: What was the identity of the ofﬁce when you arrived in 1987 How was it like working here?

ANTOINE CHAAYA: “ In the beginning, when I arrived to the ofﬁce in 1987, we were close by, it was at the Croix de la Bretonnerie - the second street perpendicular to Rue des Archives. The ofﬁce was very small, we were something like 12 or 13 people.(…) At the beginning, it was very, very small so working with these people, it was like working with family. Renzo is still close to people but at that time he was very, very close. And for me, meeting him the ﬁrst time and having the opportunity to talk to him was like a dream - sitting beside you, talking, and listening to what you say. He knows how to listen, he knows how to give conﬁdence to young people.”

GV: And any interesting anecdotes that represent the ﬁrst part of your career?

JOOST MOOLHUIJZEN: Our ofﬁce before was at Rue Sainte-Croix de la Bretonnerie and then we moved to this place but it was not ready at all. It was still a work in progress and it was all dark and we had woodmakers here. It was a terrible working environment, but it didn’t matter, we were just enjoying work. So I think it’s a good message that it doesn’t really matter, the beginning when you start a practice or when things are moving or what the working environment actually is, as long as you do nice projects and you have nice people to work with, then it’s ﬁne. Obviously, it can’t stay like that because that’d be terrible. But it doesn’t matter at the beginning as long as you have great projects.”

Chaaya and Moolhuijzen describe the current characteristics of RPBW and why they try to keep it a relatively small office. The architects also explain the role of the architect and how they communicate their "architecture language" with clients.

Past, Present, Future - PRESENT. Interview with Antoine Chaaya and Joost Moolhuijzen from Itinerant Office on Vimeo.

AC: “ It has been said that “Architecture is also the art of telling stories”. If I’m not wrong, it was Louis Kahn who said if he were not an architect, he would love to be able to tell stories to kids, something like that. So communicating - explaining what we are doing - is very, very important. What is also important is the simplicity of the idea. Someone said that if you are not able to explain your idea to 5-year-old kids, that means your idea is not ready yet, it’s not clear. Architecture, is a lot, a lot of things, it’s an intertwining of culture, of art, of science, of anthropology, of communication. And we should not be very, very intellectual in explaining architecture. Architecture is supposed to respond to a very direct need, I deeply believe that architecture is for doing useful things, not only to create form.”

GV: How would you describe the internal organisation of the ofﬁce?

JM: “ One characteristic of this ofﬁce is that we want teams to follow projects from A to Z as much as possible because we believe if you know the project, if you know the beginning of the project, you take the project all the way through to completion, it’s a very interesting and important process, both for the architects working on it and good also for the client and also the coherence of the design. Through that, the concept really goes from A to Z into the ﬁnest details.”

The architects talk about the challenges of our century and how current and future architects should be more sensitive, or sustainable, with the environment and human needs.

Past, Present, Future - FUTURE. Interview with Antoine Chaaya and Joost Moolhuijzen from Itinerant Office on Vimeo.

GV:  What do you think will be the future of architecture? Are there any key terms or concepts?

AC: “ I think one of the big challenges of this century is really the fragility of our earth, our environment, the sustainability of our actions. So I’m expecting architects to be more sensitive with regard to how we are designing buildings - to be really sustainable, respecting the environment, working more with the sun, the light, the wind, creating green area and continue humanising the space. I’m not expecting a revolution in the sense that we have to build only on water, I’m not expecting that. I mean in future we have some urgent needs to deal with, also some human needs. Our needs are evolving, our research and the way we express architecture is also evolving. So no doubt, at the end, the result of the change will affect architecture. But I think architecture will stay the art of building.”

GV: What message would you send to the new generations of architects? 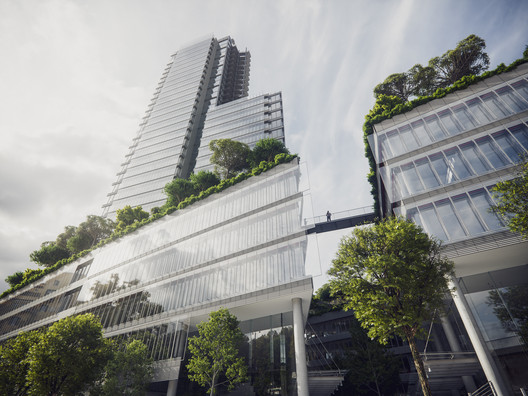