Save
Brick Houses in Spain: Modern Masonry Design for Home Interiors and Exteriors
Share
Or
Copy

The ample supply, durability, and affordability of brick makes it one of the most widely used and iconic materials in Spanish architecture, especially within the Mudejar tradition. Throughout history, they have added both beauty and function to the spaces that use them, offering protection from the elements while also permitting the entry of natural light and air flow.

In recognition of brick's impact on Spanish architecture throughout history, we have created a compilation of contemporary projects that highlight its aesthetic and functional benefits along with advice from their creators about how best use this tried and true material.

"The project arises from the willingness to study how a townhouse, that is, with one of its party walls with no openings, can get natural light around the entire perimeter, and therefore have the same qualities as an isolated house."

"The closing exterior wall, -the façade-, was made with the same perforated bricks at full sight but turned round, with the holes facing outside; this means the façade is ventilated and there’s a cavity that easily drains the water thanks to the bricks’ geometry. The deck framework has small beams and joists strictly lying on the load bearing walls in order to avoid the transmission of bending momentum to the wall structure. The deck was protected with recycled material of ceramic waste from same the building works."

"To build the house as a hierarchic process was also useful for our design, adding processes and elements. A powerful and decisive concrete structure was necessary to support the outer skin and win the war in the first battle. Add the rest and close the shelter: brick lattice, carpentry on one side and shutters on the other."

"According to its materiality, the house is built on double face brick load-bearing walls, using red masonry for the outer face while white painted inside; wooden window and door frames with traditional outer roller blinds as sun screens when required."

"The design called for a very light construction, or else one that would evenly distribute the loads to the ground. The light construction option was discarded because it was considered important to gain interior thermal inertia for a better passive behaviour... The first decision was to build a house on ground level in order to distribute the weight of the building. The second, to use decking to convey the load of the pavements and use directly to the ground. The third, to use a linear structural system organized in a grid to fully and proportionally distribute loads of the roof to the ground. In sum: taking the project to the limit, adjusting to the maximum and overloading the terrain to an extreme to achieve the heaviest house possible with the maximum mass (inertia) the terrain could take.

"Relationship between different structural units produces discontinuities that need to be solved, becoming as an opportunity to organize brick masonry and creating post-compressed beams where solid brick layers will be reinforced. Load bearing walls are stratified in strips between ledges and lintels creating a gradient of densities from the thinner and more solid pieces in the ground floor, to the thicker and perforated pieces of the upper floors. Diverse structural requirements of the masonry work produce different rhythms and textures achieving new expressivities."

"Initially, three very small houses divided into various small rooms in ruin, shared two patios behind a façade that was maintained unchanged for years, crossed by large brick arches... Inside the houses, the ancient brick and stonewalls, built with the traditional local rigging, were painted in white, considering the reasonable use of existing materials. It was sought to preserve the natural texture of the materials in order to better integrate them with the surrounding textures. The new staircases were built with steel sheet. "

"The horizontal concrete elements were left exposed to establish a reference pattern in the façades and extend in overhangs that protect the most exposed façade in one side and cover the space to park the car in the other. The no bearing brick walls have been painted white, similar to the recent vernacular architecture of farm sheds and stables in the area."

"The ultimate ambition of the work is to be able to master every centimeter of the final result. The details that have been achieved after-hours planning and researching the industry, getting define mechanisms, installations views, respect for the existing tree, (both internal and external) carpentry, and hardware."

"Constructively, rough textures and presence of matter were sought: the dominant materials are a slightly granulated concrete below ground level and masonry of handmade bricks above it. From the street, the latter appears as a substantially continuous skin, punctuated only occasionally by lattices made of the same kind of brick."

"The materiality of the project takes on special importance, resolving the whole project with a single material, made of brick walls built with a Flemish or "Dutch" bond, which allows the movement, displacement or absence of the header brick, the wall becomes a rough plinth for the building or perforated lattice that allows the passage of light and reminds the vernacular constructions of dryers in the fertile plain of Granada. All the exterior paving, ramps and stairs are resolved with the same material, contributing to a monolithic image of the project."

"The house is unique. It retains its solid brick walls and its wooden beams. So we saw its value: a handmade execution and the quality of well-selected and manufactured materials. The main action is to strengthen the building envelope, the horizontal structure and the decks. Undress, dismantle and reinforce are basics. So the continent is emptied and reduced to a skeleton with an open interior."

"Two materials harmonized through its rugged and vibrant texture:
1. Concrete texturized with OSB boards simulating a vegetative, friendly and warm appearance.
2. Rustic brickwork with mortar with the same thickness as the brick that resembles the historical brickworks where matter and not chemistry was the only construction resource.  This brickwork is used both in the inside and outside of the house, with a different pattern. Using the brickwork in the inner partitions helps show the desire of the house to be open and eliminate boundaries. Brick is used in different details from window frames, shelves, bathroom benches...the intense use of the material is even achieved in the showers with a transparent primer over the brickwork. The house seeks to eliminate its boundaries: Shadow space is sought, the glazing of the main patio secretly disappear in double walls wishing to be opened from April to October, the inner paths of the house never have dead-end making it ideal for playing hide and seek and running around. "

"Pavements and wall cladding made with mechanized pieces of terracotta of two sizes: 24x12x3 cm. and 24x5,5x3 cm. with a rig that combines both sizes.   In the most vulnerable areas of the humid premises these same pieces have been enameled in white, prior to their placement, by the same owner of the dwelling who has a degree in Fine Arts".

This article was originally published on February 26, 2020. 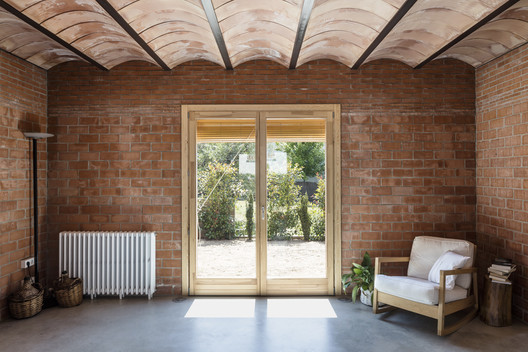