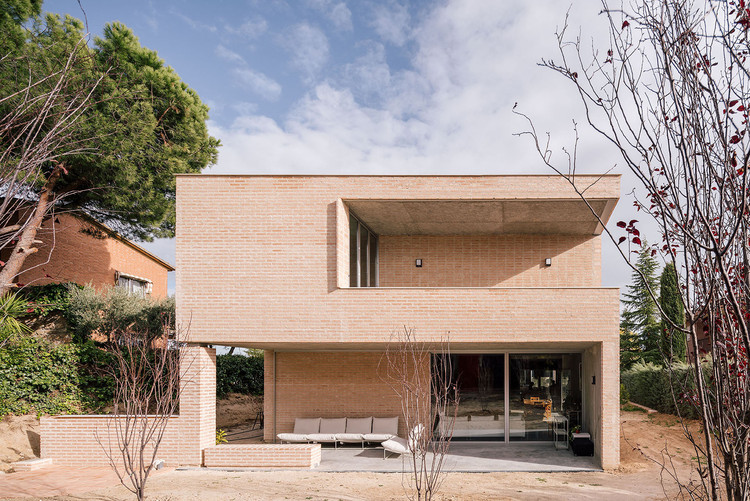 Text description provided by the architects. This single-family home is located in a plot of hardly over 1000 m2. The program is mainly developed on the lower floor, with a double-height in the living room which articulates the small program of the upper floor. The municipal setback is given to the street forming an open space that is used as a guest´s parking while offering an expansion of the street as a public space. In urbanism where everything is fenced up and closed it is very surprising to see the generosity of offering this space. The program is atypical and, paradoxically, its novelty consists in being traditional and almost forgotten: accommodating a family formed by three generations.

Firstly the house is divided into two separate pavilions and secondly, the floorplan is not divided by main and secondary bedrooms: whichever the needs of the family, the rooms are occupied by the family´s decisions and not by the imposition of the house. The house seeks to eliminate its boundaries: Shadow space is sought, the glazings of the main patio secretly disappear in double walls wishing to be opened from April to October, the inner paths of the house never have dead-end making it ideal for playing hide and seek and running around.

Two materials harmonized through its rugged and vibrant texture:
1. Concrete texturized with OSB boards simulating a vegetative, friendly and warm appearance.
2. Rustic brickwork with mortar with the same thickness as the brick that resembles the historical brickworks where matter and not chemistry was the only construction resource.

This brickwork is used both in the inside and outside of the house, with a different pattern. Using the brickwork in the inner partitions helps show the desire of the house to be open and eliminate boundaries. Brick is used in different details from window frames, shelves, bathroom benches...the intense use of the material is even achieved in the showers with a transparent primer over the brickwork. 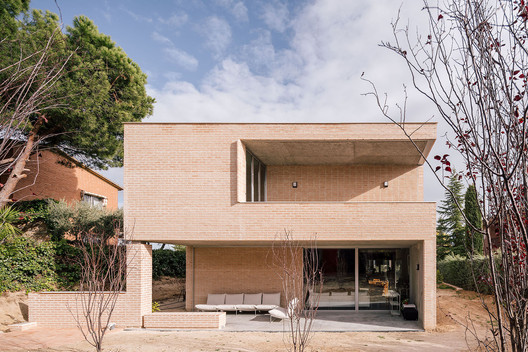