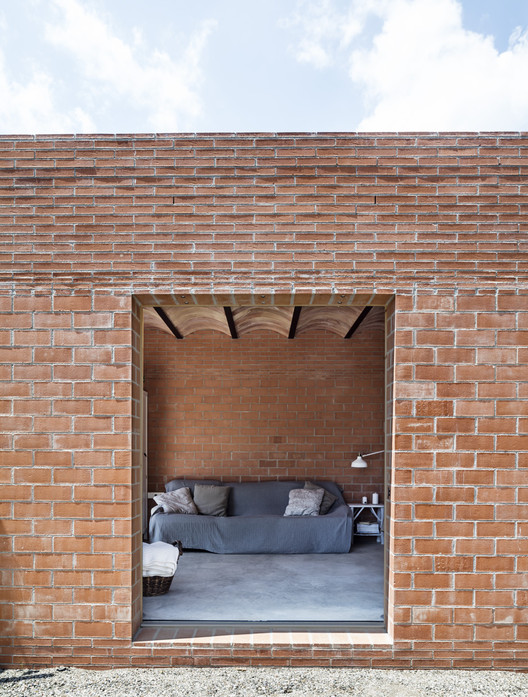 Text description provided by the architects. On a plot without salient features, the project took as starting point the restrictions marked by the geotechnical study, which showed that the first meters underground had a low resistance capacity. To avoid a deep foundation, not recommendable for both economic and environmental reasons, it was necessary to reanalyze the organization of the house and its building systems. The design called for a very light construction, or else one that would evenly distribute the loads to the ground. The light construction option was discarded because it was considered important to gain interior thermal inertia for a better passive behaviour.

The first decision was to build a house on ground level in order to distribute the weight of the building. The second, to use decking to convey the load of the pavements and use directly to the ground. The third, to use a linear structural system organized in a grid to fully and proportionally distribute loads of the roof to the ground. In sum: taking the project to the limit, adjusting to the maximum and overloading the terrain to an extreme to achieve the heaviest house possible with the màximum mass (inertia) the terrain could take.

The volume freed up below the deck was filled with a thick layer of gravel, creating a thermal collector with a high inertia that pretreats the air renewal of the house. In the design process, any problem was treated as an opportunity that could be taken as an advantage to improve the project. The program is distributed in ten equal spaces of 3.5 x 5.12 meters. The versatility of these 18 square meters and the generous relationships between them offers, surprisingly, great freedom and allows imagining that the house can be used in very different ways over the years, creating rooms that can be independent or used as a single space.

The architecture pursued was one that responds to the minimum and basic needs, avoiding superfluous elements, but that allows at the same time a maximum potential of uses. The house is just an infrastructure where the users can choose the best way to make it their own. The solar protection reproduces the interior grid with a vegetal protection organized like small chapels, creating a threshold that will prevent the summer sun from overheating the house, minimizing the visual impact of the construction, which will blend with the garden. House and garden would want to be one same thing, to live using the whole plot.