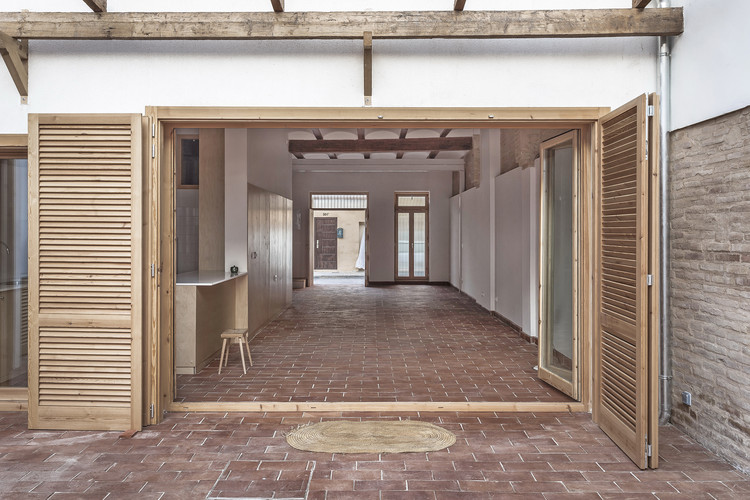 Text description provided by the architects. It is about reviving a 100 years old house between party walls in a state of abandonment.

It is located in the Cabanyal neighborhood of Valencia. An old fisherman's quarter that expands inland from the coastline with a grid pattern. Our plot is the minimum unit in that order: rectangular, narrow and deep. And the house sticks to the street, leaving a patio at the back.

The house is unique. It retains its solid brick walls and its wooden beams. So we saw its value: a handmade execution and the quality of well-selected and manufactured materials Tradition.

The main action is to strengthen the building envelope, the horizontal structure and the decks. Undress, dismantle and reinforce are basics. So the continent is emptied and reduced to a skeleton with an open interior.

The house is for a young couple with twins. They are already living in this quarter, so they know that intrinsic aspects of the building that must be maintained. They know we need to solve the humidity issues and to promote cross ventilation. That we need the winter sun and that we will hide from the summer sun.

So, the project focuses on giving a fluid open space on the ground floor, while packing it on the first floor to include the entire requested program.

On ground floor we try to connect two opposite facades, from the street to the backyard, compressing its entire program aside, next to the stairs. Thus, a single open space is built and connects both exterior spaces, generating a logical visual path from the entrance to the backyard.

On first floor, the existing height is used to divide the spaces vertically. A wooden mezzanine is created to increase the surface of the bedrooms. And, as a lookout post, a terrace overlooking our own patio and the void formed by the rest of the backyards of the block is rebuilt.

The communion among clients and architect allows choosing the imperfection and apparent fragility of clay and wood. At a time when imperfect materials are questioned, those that require concentration in its production and placement, that will require maintenance; it is decided to select them as a modest but sincere response with the place, with the house itself.

The clay for the walls, for the deck slabs and roof tiles. And for the pavements, which extend outside impassive to borders. Wood for windows, furniture and blinds. And for the staircase and mezzanines.

With all this, the intervention is able to concentrate the forces in the manipulation of the house and the existing, allying itself with its memory and its way of being, with its textures and its relationship with the Mediterranean light that haunts and wraps it.

And this manipulation tries to transform the house into an improved version of itself, taken further than expected, so that it lasts another long time, hoping that the rest of the neighborhood will also do it with those same values that define it.