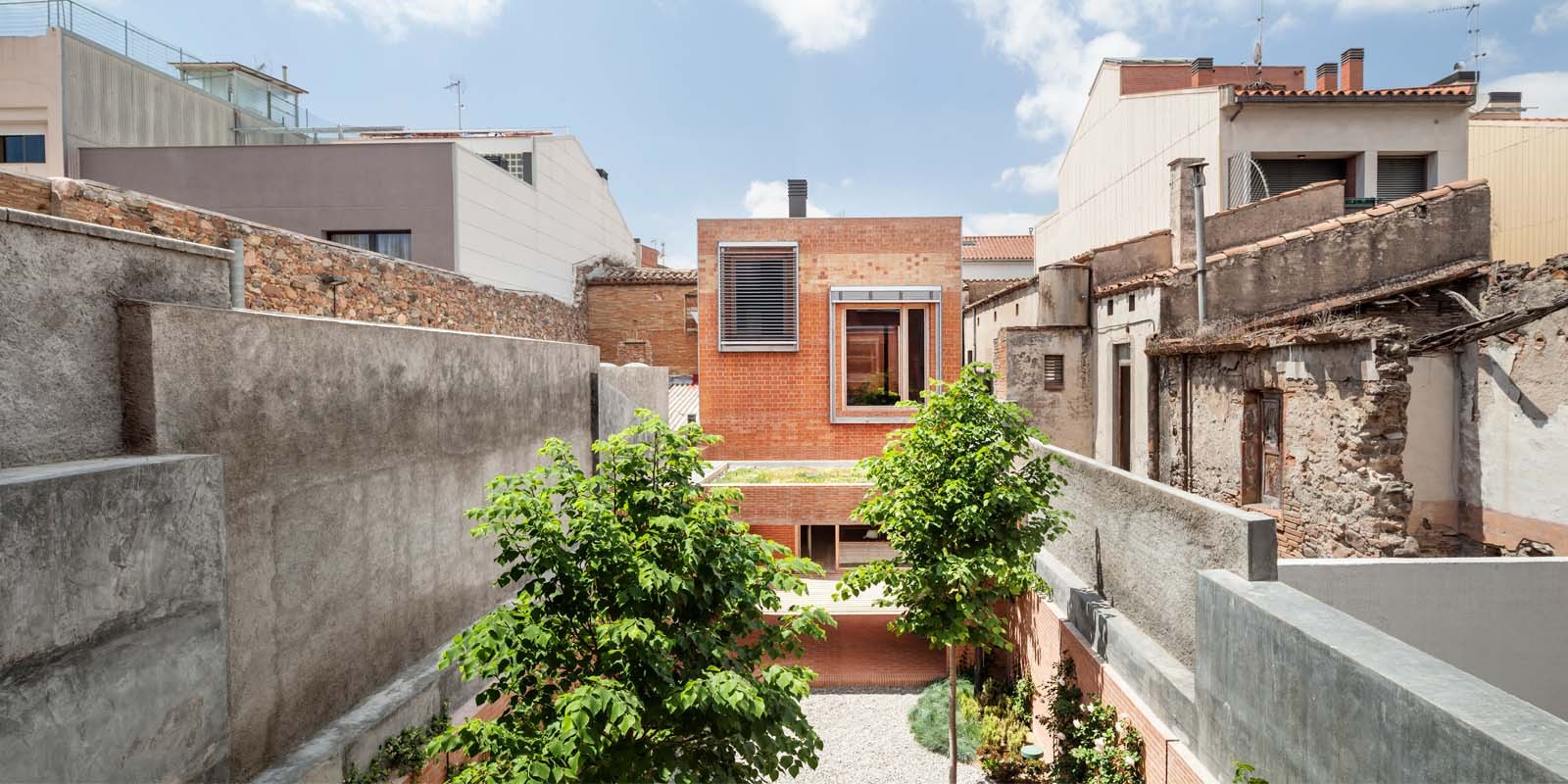 Text description provided by the architects. The plot is located in the historical city centre of Granollers and placed into an urban fabric of dwellings between party walls. The available space is narrow and elongated, only 6.5 m wide; and accessible from two streets. Owing to the dilapidated state of the existing building, only the main façade, reasonably well preserved offering a certain heritage value,could be maintained.

The desire of the owners was to differentiate two zones in the house: the domestic area, where the daily family life had to take place; and a secondary area, quite and isolated from the first, functionally independent to be used indistinctly as a living room or to welcome occasional guests as well as organizing meals and gatherings.According to planning regulation in street alignment the partition in two areas along the plot appears automatically.The domestic area is placed towards the main street, while the west side of the plot, isolated and separated by the central garden, becomes a segregated zone for vehicle access.

The east-west orientation of the plot and the narrowness of the access streets made it difficult to achieve a good solar gain throughout the street façades. This circumstance, added to the difficulties to achieve privacy in the ground floor, led us to move back the building from the front street line, creating access patios both sides of the house.  These patios allow upper solar gain and at the same time create transition spaces, both physically between the street and the house, and between outdoor and indoor climate. Semi covered and practicable spaces with retractable roofs tops allow capturing energy during winter time as well as ventilation through summer. This way both, pedestrian entrance from main central street and vehicles access from the opposite side are solved, avoiding typical secondary and often neglected spaces that are often generated by this kind of uses.  The qualities of privacy, light, space and thermal comfort of these spaces allow the house to be used and perceived from end to end, without any hidden or residual space. These bioclimatic spaces become the first step of a sequence of areas linking one street to the other offering all along a great variety of conditions, characteristics and properties clearly differentiated among themselves. The addition of this sequence of spaces and thermal conditions creates a ground floor 53 m long totaling 345 m² dedicated to the most frequent and collective use of the house. It works at the same time as a long continuous hallway, giving access to the private and service areas of the house located in the upper floor and the basement, respectively.

Each one of the rooms was individually treated yet carefully connected with the next one, clearly identifying the specific use of each space being all, at the same time, part of a whole. This approach helps exterior spaces to achieve the quality of a living space, therefore becoming one more room of the house. This way, this main ground floor combines different interior rooms, lower or higher roofs, longer, semi-exterior covered and bioclimatic rooms as well as covered and uncovered outdoor rooms.

The sequence of spaces creates some kind of ambiguity about what is an interior or exterior space. At the same time, outdoor spaces are intentionally differentiated, so the presence of greenery and natural ceramic helps creating genuine landscape impressions in a plot without views.   The organization, based on sequenced spaces, is totally related to the structural system of the house, opting consequently for a walling system that materially reinforces the typology of the house. Load bearing walls embrace every space limiting both the size as well as the proportion of the openings between spaces in such a way that the structure drastically conditions the experience and perceptions while in the house. Variety of ceramic materials, different skin textures, walls thickness and the capacity for self regulation of humidity and thermal inertia are experiences identifying every space typology. Space is the structure and the structure configures the space.

Relationship between different structural units produces discontinuities that need to be solved, becoming as an opportunity to organize brick masonry and creating post-compressed beams where solid brick layers will be reinforced. Load bearing walls are stratified in strips between ledges and lintels creating a gradient of densities from the thinner and more solid pieces in the ground floor, to the thicker and perforated pieces of the upper floors. Diverse structural requirements of the masonry work produce different rhythms and textures achieving new expressivities.

Materials and spaces distribution prioritizes optimal passive behavior of the house, starting from bioclimatic patios that not only ensure thermal stability between 15 and 25ºC, an intermediate and improved climate, but also reducing the energy demand of the spaces directly related with those patios. The structural system and the double brick wall facade, filled with a 10cm isolating wood fiber, guarantee a very good relation between the thermal isolation and the indoor thermal inertia.

The solar protection elements hung from the exterior brick wall preventing thermal bridges yet disassociated from the window opening, as a secondary and more dynamic element, a circumstantial addition suitable to be changed or replaced over the years.

Finally the house is climatized by radiant systems linked to a geothermal system to allow passive exchange with the ground. Additional to the radiant floors, metallic sheet composite-slabs -structures activated by the ground working as large radiators or radiant surfaces- help dissipating the heat during summer. This high internal inertia linked to the ground temperature allows achieving a very stable thermal behavior over the seasons with the lowest energetic consumption.