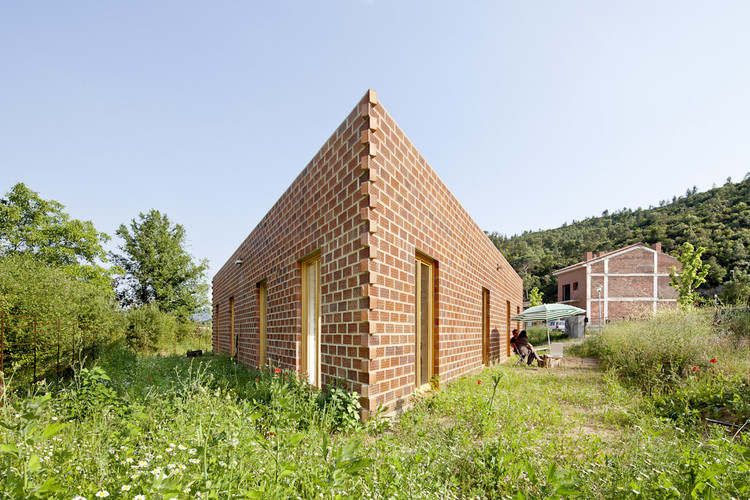 Text description provided by the architects. The house was for a young couple without children, and had some initial programmatic requirements which were pretty conventional (a garage, three bedrooms, a study, etc). The plot, which was triangular and around 400 sqm, was part of a land promotion protected by the Incasol for self promoters and was subjected to a tight schedule for the development of the house.

While designing the project, both the clients’ requirements as well as our own ones had to be redefined so that the final price could be lowered while respecting most of the specifications of the couple, the land and the (social and economical) context. During this process the cost was reduced to 65%.

Firstly, it was decided not to take any action in relation to the plot; the idea of concentrating exterior space in any of the facades had to be relinquished since this strategy needed a two-floor building and it was understood that in order to meet both the building and the economical objectives a ground-floor building was needed... this volumetric sacrifice implied a programmatic one: there would be no garage, no hall and just one bathroom.

The triangular geometry of the plot was assumed and a systematic distribution was established based on two basic and equivalent spaces which were only qualified according to its orientation and its relationship with the exterior: three spaces from 8 to 10 sqm and three from 15 to 18sqm.

All of them on facade and based around a central triangular space which had not been programmed before, but which had surface enough to assume unforeseeable uses (storage room, summer dining room, study, bicycles...). Taking into account the willingness of working with an economic system of load bearing walls working on pure compression, a technology which could be assumed by any traditional builder was designed and any building system which was not available to any of the interlocutors was discarded.

Although the strict budget control which had been carried out, at the time of asking for credit facilities, the clients met with the banks ‘refusal of providing the initially foreseen 250.000 €. From that moment, a process of revision, simplification of technologies and the total elimination of coverings was carried out; therefore, the budget was lowered to the final 120.000 €, with the builder’s approval.

The house was built with a double wall made of perforated bricks with an air chamber, with the structural wall in the internal side in order to avoid thermal bridges. This wall, which had the perforated bricks arranged to be seen, was based, together with the interior load bearing walls on an oversized insulating suspended ground floor, which allowed us having the concrete paving completed before the building of the walls. Thanks to this action, the joints were hidden and the difficulties which usually arise from building concrete paving a posteriori were avoided.

The closing exterior wall, -the facade-, was made with the same perforated bricks at full sight but turned round, with the holes facing outside; this means the facade is ventilated and there’s a cavity that easily drains the water thanks to the bricks’ geometry. The deck framework has small beams and joists strictly lying on the load bearing walls in order to avoid the transmission of bending momentum to the wall structure. The deck was protected with recycled material of ceramic waste from same the building works.

As for the openings, only the rooms which were furnished as bedrooms (two of them) were closed with wooden sheets put on top of (and not fitted in) the load bearing walls. All the vertical installations for electricity and data were left at sight, hiding the horizontal ones into the concrete deck slopes.

Finally, all the interior ceramic works were painted white. Outside, in order to level and slightly flatten the land, a system of reinforced earth walls was used and with its corrugated steel beams a light fence which will act as a stand for the vegetation was built.