Albania’s capital city, Tirana, is slated to receive the country’s first Vertical Forest in a scheme designed by Milanese architecture firm, Stefano Boeri Architetti. Originating as part of the city’s new development master plan completed by the firm 3 years ago, the building will greatly increase the amount of greenery within and around the metropolitan area. Tirana’s Vertical Forest will contain 21 floors above ground with 4 more below and will be populated by 105 apartment units above a primarily commercial ground floor. 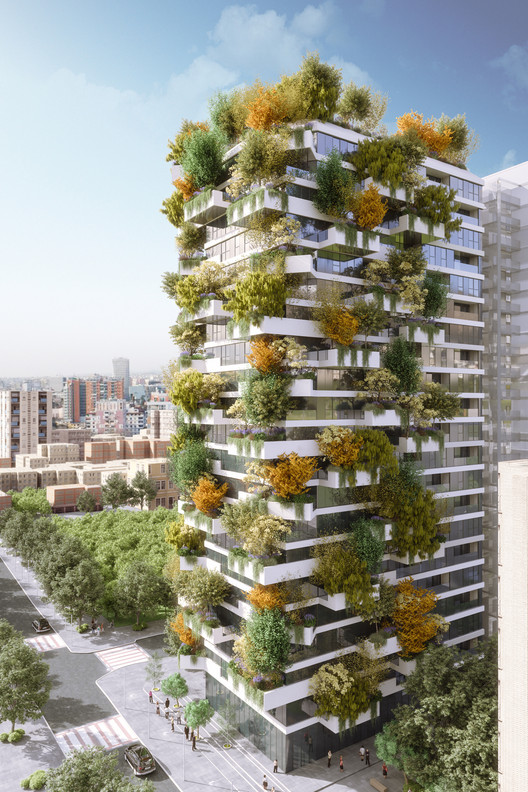 The building will be located in the city center, at the end of the historic Dëshmorët e Kombit Boulevard near Mother Teresa Square, in close proximity to the Grand Park of Tirana (Parku i Madh i Tiranë). One face of the structure will abut an existing building, while the other three green façades “open like a flower” with over 3,200 shrubs and bushes and 145 trees. With a total of over 550 square meters (almost 6,000 square feet) of new green space, the Vertical Forest will increase the city’s biodiversity and contribute to a new urban ecosystem. The building’s façades are floor-to-ceiling glass to dissolve the barrier between inside and outside and strengthen the connection to nature for building inhabitants and provide views of the surrounding city.

Stefano Boeri describes the project, “Just like the other Vertical Forests in the world, the one in Tirana, the first in Albania, was born from the selection of local trees, shrubs and plants and from the study of the best ways to grow them between the balconies. It is a house for trees and people. Tirana Vertical Forest is unique, because one of its façades is attached to another tall building; for this reason, we spread the plants and balconies onto the other three sides, so that they fan out in the direction of the stadium, and Dëshmorët and Kombit Boulevard."

The Tirana Vertical Forest is indicative of Stefano Boeri Architetti’s commitment to “Urban Forestation” and bringing green space to cities to mitigate climate change. The plants will mitigate urban atmospheric pollution by absorbing CO2 and fine particles while also producing oxygen and creating a healthier microclimate. The Vertical Forest is also but one of the projects in the Tirana 2030 master plan illustrating Boeri’s efforts to develop the Albanian capital.

The Tirana 2030 Local Plan was developed by Stefano Boeri Architetti in collaboration with UNLAB and IND and has been approved by the Tirana City Council. The plan incorporates controlled development, advanced infrastructure, green corridors, and enhances the city’s architectural heritage. Also known as TR030, it consists of 13 strategic projects aiming to generate public space and integrate nature and farming into the city.

The first element of TR030 to being construction was the Blloku Cube. Located centrally in the Blloku district, this first project aims to set the tone for the master plan as a whole. The multi-use building includes commercial and office space, as well as a rooftop garden. The stand-out feature is the iconic aluminum cladding of the double-skin façade, which serves to filter sunlight into the building and creates an energy-efficient envelope.

Spread throughout Tirana, Boeri has also designed three new school buildings, which will be open 24 hours daily to become vital social centers for their communities. Locations were chosen in strategic social hubs within Tirana’s northwest quarter and each building will contain not only multiple schools, but also meeting and social spaces open to the broader community. Architecturally, the schools will use materials traditional to Tirana, red brick and white concrete, to integrate them into the city context.

Stefano Boeri Architetti’s work creating social and environmental change is not limited to the Albanian capital, however. The firm recently won MIPIM and The Architectural Review’s Future Projects Award 2019 for their design with MVSA Architects of the Wonderwoods building in Utrecht, The Netherlands. Comprised of two 90-meter (nearly 300-foot) towers, the project’s living green facade recalls the Vertical Forest in Tirana. This facade is designed to absorb 5.4 tonnes of CO2 annually while bringing nature and biodiversity into the city. The buildings will provide housing, offices, and public facilities.