After news of Frei Otto winning the 2015 Pritzker Prize broke, the internet was filled with comments on his influence on the profession over the past half a century of architecture. Of course, with the news of the Pritzker sadly packaged with news of his death, the impulse for many to offer some words in remembrance heightened the outpouring of opinion.

In addition, Otto was especially popular among some of architecture's most established names; in a tweet, the New York Times architecture critic Michael Kimmelman revealed that among the prominent advocates pushing for him to be awarded the prize were past laureates Renzo Piano and Shigeru Ban. With that in mind, we collected the thoughts and reactions of some of the leading architects today, revealing the respect held for Otto within the profession.

Louis Kahn asked the brick, “What do you want to become, brick?”

The brick answered, “I want to become an arch.”

I think that Frei Otto was an architect who kept asking the “air” what it wanted to become.

He kept thinking about how to envelop “air” or “space” with the minimum of material and power.

He was still touching materials and drawing sketches until his last breath. His achievements, rather than just being his “works,” have become the ‘‘grammar’’ of structural design, unnoticed, and we architects are only now realizing that we unconsciously base our designs on his grammar.

I am truly indebted to Frei Otto, for sharing his deep understanding and inventions in the field of architecture.

Frei Otto has been one of the most seminal people on my route to architecture.

By the clear determination to work on basic shelters for human communities.

And exploring the movement of forces within the structure to make it visible.

And fighting against gravity.

He succeeded in this and he will always be in my thoughts.

My friend Mark Lee and I, when we get together here or there, like to speculate (bet) on who will win the next upcoming Pritzker Prize. Typically we are all over the map: the predictable ones, the upstarts, and the long forgotten ones. This year I nailed it.

In an architectural culture (Germany) where the average is very high but with few standouts Otto stood out. Like Gottfried Böhm before him (prize winner) Otto was unique in producing an authentic body of work driven by an unrelenting passion for research and experimentation, part scientist part poet, a reminder of what is at the heart of German creativity, the Tüftler, or tinkerer, the one who with their own hands discovers something entirely new. Here the path, the method, is as significant as the goal.

The measure of such a project is its resonance and impact on a following generation not in duplicity or imitation, but rather, in the desire and courage of thinking such a project.

As a pioneer of lightweight structures, Frei Otto was the architect that our generation researched when we were in college.

In fact, there are three kinds of architects today. The first kind are those who have been exploring in the areas of art and culture and trying to express this in architectural languages. The second and most common kind are those who have been focusing on urban problems and environment; architects in the past were rarely involved in urban planning, but now the number is steadily increasing. The third kind are like Frei Otto — they have been exploring and developing new technology. There are fewer and fewer architects of the third kind now.

Lightweight structure doesn’t need a thick foundation; it uses less material and has an obvious advantage in environmental protection. Therefore, in modern times, many architects are interested in the research, including me.

In the modern architecture context in which commercial buildings get an increasingly dominant position, awarding the Pritzker Prize to Frei Otto may imply that architecture should return to its origin.

IÑAKI ÁBALOS
Chair of the Department of Architecture at the Harvard Graduate School of Design and curator of the Spanish Pavilion at the 2014 Venice Biennale.

Frei Otto has shown us that science and beauty are essential parts of architecture; accompanied by perseverance and inspiration producing unforgettable images, unique experiences. My admiration for the person and his work knows no limit, when I return to images of the construction of the Munich coverings that were released at the time I shudder, almost dizzy, at the security, the risk and expertise displayed, and I can not shake the idea of a medieval cathedral builder...

Ah! And I am especially pleased that the Pritzker will not fall for social rhetoric a second time, the real contribution of architecture is in knowledge. Congratulations!

Frei Otto is a revolutionary architect and structural engineer. He is renowned for his development and use of ultra-modern and super-light tent-like structures, and for his innovative use of new materials.

He is a great teacher and set up his own Institute for Lightweight Structures at the University of Stuttgart in 1964, making early use of computer modeling to create sensational membrane structures, inspired by natural phenomena — from birds’ skulls to soap bubbles and spiders’ webs.

Frei Otto is one of the great architects and engineers of the 20th Century and his work has inspired and influenced modern architecture, as we all learn to do more with less, and to trade monumental structures for economy, light and air.

I was both very happy to hear yesterday of Frei Otto’s Pritzker Prize recognition and profoundly saddened to learn of his passing.

For my generation of architects, Frei Otto was an altruistic revolutionary who produced works of immense intellect and beauty. His pioneering message of technology for the sake of society has become increasingly relevant as we move into this digital age.

His explorations into light, strong tensile systems were not merely technological pursuits; they were didactic of a larger social discourse of inclusion and egalitarianism.

Ultimately, under his visionary innovations, he initiated a new age of possibilities for architecture to offer intelligence, performance, hope, and optimism.

Throughout his life, Frei Otto has created imaginative, fresh, unprecedented spaces and constructions. He has also created knowledge. Here resides his deep influence: not as forms that were copied but as paths that were opened by his research and discoveries. His contribution to the field of architecture in that sense, has been not only skilled and talented, but also a generous one. 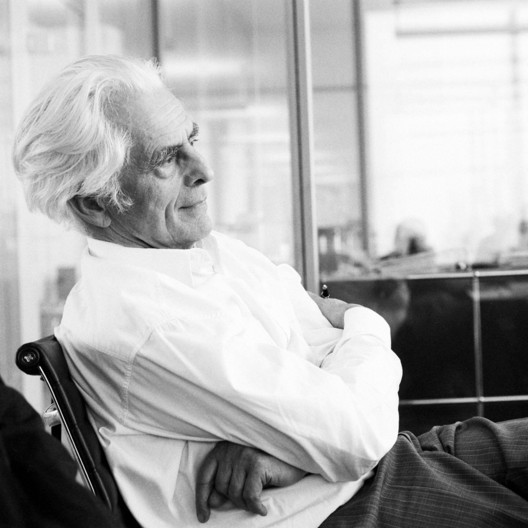