In times of quarantine, architects and designers are settling into a new remote working environment. In this process of implementing platforms and workflows to work from home, the risk of social isolation remains real, even for companies used to this environment, such as ArchDaily. As David Basulto, CEO of ArchDaily, wrote last week, the quarantine implies not just working online, but "staying connected and support each other."

Juan Herreros on His Thriving Career in Architecture and Academia

Juan Herreros is an acclaimed Spanish architect with multiple award-winning projects to date. In addition to his impressive creations in the construction field, he has strived to redefine the practice of architecture by teaching at the School of Architecture in Madrid and at the GSAPP Columbia University in New York. His collaborative office, Studio Herreros, is an award-winning firm with projects built all over the world, ranging between residential and public spaces. These projects vary between small-scale, "immediate" projects, and internationally-commissioned structures and building competitions, allowing the architect to be one of the most influential Spanish architects practicing today.

Juan Herreros on Spanish Architecture and Starting a Small Practice

In this second episode of GSAPP Conversations, Amale Andraos speaks with Spanish architect and GSAPP Professor Juan Herreros about the relationship between teaching and practicing architecture, and how he has carefully designed a particular way of working globally. Herreros, who co-founded Abalos&Herreros in 1984 and currently leads estudio Herreros, offers insight into how working sensitively in foreign settings also helps to develop a robust local practice, and how he is bringing new models of emerging practices to his students in GSAPP’s Advanced Architecture Studios.

Herreros Arquitectos just sent us their recent project for a mixed-use building in Casablanca, Morocco. Resulting from a series of urban, spatial, formal and sustainable variables, the project--which includes housing, commercial and athletic spaces--is characterized by a permeable facade that directly responds to the climate. The repeated decorative element is a reinterpretation of a traditional geometric code that is common to the region.

The project was featured in the Moroccan Pavilion in the 2014 Venice Biennale. Find the images and product description, after the break.

Juan Herreros is one of the most influential Spanish architects practicing today. Executing a delicate balance between his role defining the practice of architecture with work in the academy, he has not only overseen the construction of significant built projects, but also teaches at School of Architecture of Madrid and is a Full Professor at GSAPP Columbia University in New York. It was recently announced that his winning proposal for the Munch Museum/Deichman Library competition was given the green light. The museum will house the world’s largest collection of Edvard Munch artworks and is scheduled to open in 2018.

Herreros strives to highlight architecture’s multi-faceted, multi-disciplinary nature by revealing the complex relationships that lie behind individual projects—undergirded by what Herreros identifies as a “technical culture” (see the exhibition Dialogue Architecture that he curated at the last Venice Biennale).

Together with Iñaki Abalos he founded Abalos&Herreros in 1984. In 1992 they founded the International Multimedia League (LMI), an organization that contributes to the simpliﬁcation and intensiﬁcation of artistic practice. Since 2006 he practices with the firm Herreros Arquitectos a collaborative office that has won numerous competitions and commissions. His projects can be found around the world and range from schemes for public spaces to designs for houses.

“Something unique about [our] studio is that, given the difficulties of doing research in architecture today and the usefulness of the “research applied to architecture” concept, we maintain two open, integrated lines of work: one line maintains small projects, very quick, very immediate; and the other is related to the large projects, generally the result of international competitions around the world.” 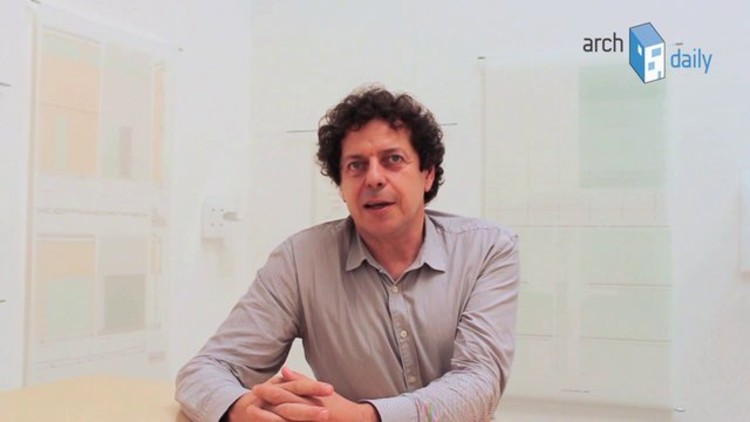 During the 13th Venice Biennale we had the chance to interview Spanish architect Juan Herreros, founder of Herreros Arquitectos (full interview in a following post).

The exhibit Dialogue Architecture aims to expose the complex relations that happen behind the scenes of a project, part of the technical aspects of architecture from where innovation informs the creative side of it.

More about the exhibit after the break.