In the architectural world, unestablished practices are often overlooked, yet, by challenging the traditional dogmas of the industry, they can have a significant impact on the built environment. The Young European Architecture Festival (YEAH!) explores the work of these upcoming architectural offices, looking at how they share ideas visions and experiences at the European level. The event is divided in two sections: Habitats, exploring ideas of domesticity and the residential typology, and Hybrids, initiatives that are rethinking the traditional systems of city planning.

The following represents a selection of projects by emerging architectural practices selected by YEAH! For the Hybrids category. Many of these initiatives are challenging the ideas of public space, but in doing so, they are also shedding light on the larger social structures at play in these spaces. The selection includes community spaces, schools, transportation hubs, and even projects initiated by the architects themselves, who have noticed deficiencies in their environment and are working to not only correct them but to enhance their presence and empower the local community through them. 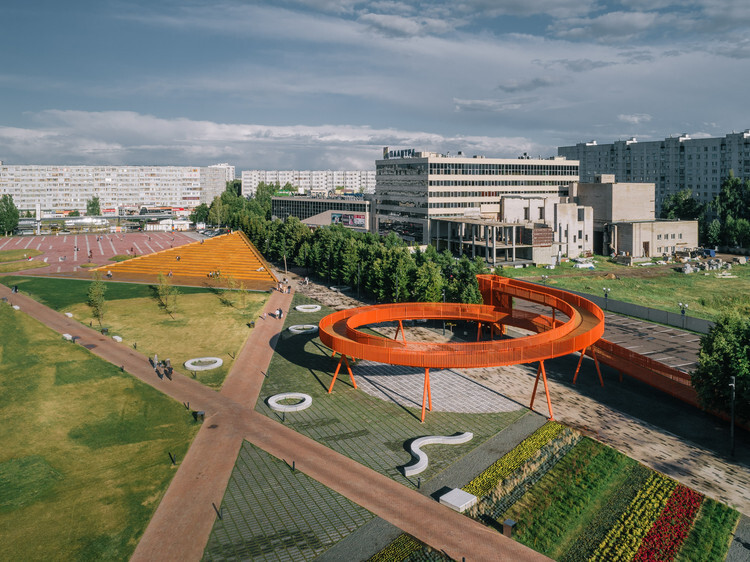 Redefining Domestic Spaces of the Future: 14 Projects in Europe

The project takes a deserted warehouse for drying wood built on a Delta of Rijeka city in the 1960s and transforms it into a vibrant space for public events. The minimal interventions are aimed at transforming the building into a safe venue for city programs, ensuring that the structure is compliant with the fire protection regulations and public safety and accessibility laws. The interventions also included the reconstruction of the entire roof and the installation of connecting bridges between the galleries.

“BelMondo” is a research project initiated by La Rivoluzione delle Seppie. By creating a digital network of creatives, it aims to experiment with new and advanced forms of urban and social reactivation. The initiative is taking place in Belmonte Calabria, Italy, and it has sparked an annual event, Crossings, that offers opportunities for cultural exchange between different stakeholders. To accommodate these functions, the architects have transformed a former nun’s house through minimal architectural interventions. The project is open to everyone, hoping to become a trigger for cultural, artistic, and social activities useful for developing a non-formal educational program.

The project reimagines the main public square of Naberezhnye Chelny in Russia, a formally soviet industrial city built around the Kamaz factory. The space is now stripped of its ideological meaning by relocating the central axis to the edge of the square to an existing row of densely planted trees. Now the space functions as a “city carpet,” divided into three distinct characters: The Event Square, a paved urban space for outdoor markets; the “Green Square,” for relaxing leisure activities; the Cultural Square, with a renovated fountain and a new shallow pool. The intervention aims to counter and reduce the negative emotions associated with the space and to transform it into a true city center.

“Mar de energía” aims to create a space to support citizen initiatives that seek to change the energy model and the defense of energy as a common good. The project aims to channel progress and urban innovation by encouraging community energy projects that cause positive change in the city and providing a platform for the strategy of urban and economic resilience. Through the support of this platform, initiatives introduce renewable energy into the urban fabric and encourage citizens to become both producers and users of sustainable energy.

Inspired by 21-century learning principles, the Aarhus School of Architecture is envisioned as a factory for architecture. The school is designed as an incubator for experimentation and practice-based learning. The architecture of the building is raw, resembling an industrial structure with exposed materials and technical details, but organized to become a flexible background that supports learning. The building, designed to reduce energy consumption by 50%, has grown through the process of co-creation, demonstrating an alternative direction for cross-disciplinary collaboration in the building industry.

In Montreuil, this rehabilitation site takes a small former warehouse of 140 square meters landlocked between permanent constructions in a former industrial site and converts it into dwellings and workshops. The project includes a professional kitchen and two 55 sqm apartments that take advantage of the position of the existing building and create two contrasting characters: an extroverted and an introverted one organized around a small patio. The roof also becomes an active space through the addition of an aromatic garden that serves the kitchen. The project thus takes advantage of the particularities of the site while being open for further adaptations by its inhabitants.

For this project, the architects have kept the image of a standard agricultural hangar, complete with the distinct definition of its multiple subordinated programs: the breeding vat room and the partially buried stocks; above, the place of harvest and maceration vats as well as agricultural machinery storage; the tasting room which looks at them; the house of the winegrower; and guesthouses. A small tunnel where the barrels are stored is the only element breaking this rigorous organization.

The project was born out of the need expressed by the municipality for a new multi-purpose hall. The architects adopted the principle of “more space for less budget” when designing the adaptable building for the multifunctional center Warot. To achieve this, they invested in the aspects that would have the most impact: spatiality, adaptability, and structure. Many local actors were involved in the process, ensuring that the building will remain meaningful for generations to come.

Estacion San Jose is a mixed-use infrastructure project in the city center of Toluca de Lerdo, Mexico. The project was designed to become a new cultural, economic, and activity hub, a social condenser that would revitalize the central area of the city. It combines various community programs, like office and co-working areas, cultural and commercial space, a car park, and a rooftop garden accessible to the public. The flexible infrastructure is expected to be occupied by many different types of users.

This self-initiated project by Chybik+Kristof Architects transforms the decaying structure of the Zvonarka Central Bus Terminal into a functional and efficient transportation hub, adapted to the evolving social needs of the city. To pay homage to the original architect Radúz Russ, the project exposes the station’s characteristically raw Brutalist elements and holds them in contract to the irregularity of the organic wave that is designed to mirror the flow of vehicles and passengers. The project is seen as an impulse for the city and the region due to its role as a functional hub. The initiative also demonstrates the potential of architects who, in this case, managed to initiate the project, identify a client and ensure funding.

In the 13th arrondissement in Paris, the RATP owns a large maintenance site for metro trains in the vicinity of Place d’Italie. Adjacent to this industrial site is the Édouard Albert's Croulebarbe tower, a high-rise residential building. The Italie site is designed following a competition, and it is composed of large workshops, and an office building turned into a command post for the RATP and a social housing complex.

The project 'Shoe Quarters' or 'Schoenenkwartier' combines the functions of a learning center, a museum for regional history and craftsmanship, an exhibition space for fashion, manufacturing laboratories for developing new shoe designs and techniques, and public spaces. The project is located in the town center of Waalwijk, Netherlands, a place with an important history of shoe manufacturing. The project aims to help the local community remember its history and values and create a high-profile international center for knowledge. The project interweaves the history and future of the place and the community on all levels, from the programmatic to the aesthetic.

Playtime is an atelier building in the center of Rotterdam. The refurbished modernist post office from the 1960s now houses atelier spaces, workshops, an artist residency, a coffee place, and an apartment. The building is designed as a platform for research and small-scale production for a group of around 30 designers and artists. The intervention in the existing structure is subtle and provides the timeless background for the program filled in by its tenants.

This public square in the center of Warsaw is conceived as a horizontal skyscraper, creating a dialogue between the public space and the surrounding skyline. The project revitalizes an existing pavilion and defines a temporary limit to the construction site of the new museum of modern art. By integrating different playgrounds and leisure supporting elements, the initiative aims to attract a large variety of users, from parents with young children to teenagers, office workers, and elderly people. 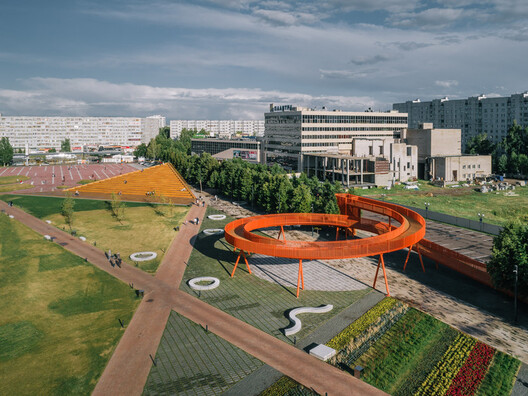