In this week's reprint, author Walter Jaegerhaus explores the U.S. housing challenge, drawing a timeline of the evolution of different architectural solutions, from around the world. Seeking to "inspire designers today to create new housing options", and hoping "that the U.S can again embrace its experimental origins and try out new ideas and methods", the article highlights examples from Europe and the Americas. 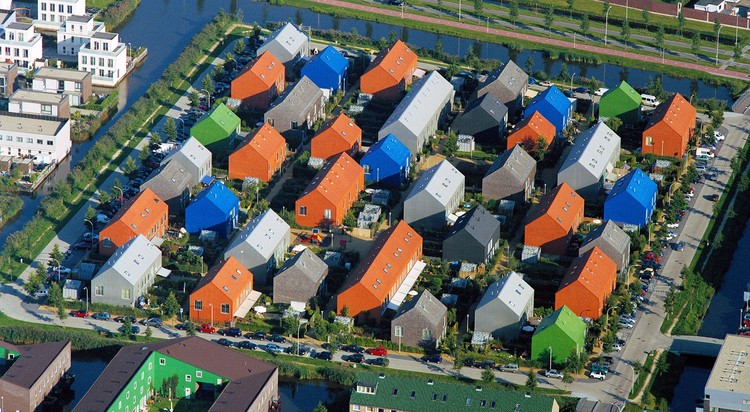 Historically, the housing shortage now experienced by many U.S. cities is not unique. A similar problem plagued industrializing cities of the late 19th century and became critical after World War I, especially so in countries that lost that conflict. Affected nations took extraordinary remedial steps; many of those were politically motivated and strengthened underlying social democratic ideals. But the design professions also participated and responded with numerous innovations and experiments, which in turn generated much-needed discussions about the use of shared space and the quality of life that citizens are supposed to be able to enjoy.

In much of the U.S., experimentation, and innovation are in short supply today. Bitterly fought battles between the defenders of single-family homes and those who want most of us to live in ever-shrinking apartments off long, multistory corridors make people believe in a zero-sum game for finite resources. What’s missing is a new creative spark that can elevate the discussion to a level where everybody can see themselves winning. It might be useful to revisit past housing experiments, to remind us how innovatively these problems had once been addressed. This should inspire designers today to create new housing options, in addition to inspiring developers to build them, and municipalities to allow for such choices in their codes.

One of the earliest utopian models for healthy cities was the Garden City Movement. The densities achieved in the garden cities are higher than in today’s suburbia; built before the widespread use of the automobile, this was necessary to offer affordable mobility through public transit. The original garden cities rose near London, but others were built in many countries. Among the most famous U.S. examples are Sunnyside Gardens in Queens, New York, and the Baldwin Hills Village, in Los Angeles, both cherished locations that, sadly, had little influence on the sprawl that eventually grew around them.

There are also some noteworthy garden cities in Berlin. The six Berlin Modernism Housing Estates from the 1920s combine smart approaches to planning, style, and garden design. Today they remain some of the city’s most recognizable examples of modernist social housing and innovative building reform. Their international architectural importance was honored with UNESCO World Heritage status in 2008.

At the same time, in Northern Europe, Mies van der Rohe began experimenting with courtyard houses as an alternate version of an intensified urban fabric. He referred to it as “a really good architectural idea.” His projects remained unrealized, but the idea by others was picked up after WWII. In 1953, Jorn Utzon drew inspiration from traditional Danish vernacular farmhouses for the Kingo Houses. Their design formed a prototype for Utzon’s second courtyard housing project, the Fredensborg Houses, completed in 1963. They have been called the finest Scandinavian example of humane housing.

The tradition of courtyard housing in a garden city was then continued through the architect Roland Rainer in a garden city in Puchenau, Austria, developed in the mid-1960s. The municipality had rejected conventional forms of housing (e.g., detached houses), which would have destroyed too much arable land. The entire garden city comprises 983 housing units. Most of them are courtyard buildings, with a smaller portion being either terraced houses or flats. A part of the housing stock is for rent, but there are also units for ownership in up to four-story buildings. This building type features unique garden courtyards. Perimeter concrete walls replace the land-wasting setbacks and form protection against insights, weather, and noise. In a climate where protection from wind and cold is welcome, the air temperature inside those walls is about 2 degrees higher, and noise levels are lower. Thus, these closed courtyards encourage outdoor living.

But garden cities were only one possible solution. For progressive urban planning and municipal administration, “Red Vienna” (1919–1934) remains an international reference point. Best known for its housing programs, this radical municipal project also entailed comprehensive social improvements that included health care, education, childcare, and cultural reform efforts. The municipal project of “Red Vienna” was not merely a housing program, but an urban program to create a more equitable urban environment. By 1934, in just seven years, 200,000 people (10% of Vienna’s population) had been newly housed in 400-plus large projects. Through these developments, the city had created a vast new infrastructure of health and welfare services, clinics, childcare facilities, kindergartens, schools, sports facilities, public libraries, theaters, cinemas, and other institutions.

The catalytic effect of the Gemeindebauten (residential buildings constructed by the municipal government) had a symbiotic affinity with Vienna’s new municipal railway. In this transit-oriented urban model, the Wiener Stadtbahn (public transit system) was both a major work of engineering that involved the construction of stations, viaducts, and bridges throughout the city and a component of urban design that physically tied the old city and the new infrastructure together. Stylistically, modest buildings complemented the rest of the city rather than aesthetically distancing themselves. They distribute the social services and cultural facilities provided by the Social Democratic municipality across the city. In doing so, the Gemeindebauten signaled to their working-class tenants that they were no longer, as Karl Marx said, “propertyless strangers in a society that was not theirs.”

Other European cities followed suit: Frankfurt am Main (“New Frankfurt”), Zürich (“Red Zürich”), and several other cities initiated programs like Vienna’s in the wake of World War I, but none were nearly as expansive nor as ambitious.

Social housing in North America has a much more troubled history. However, in Montreal, in the 1960s, a young architecture graduate named Moshe Safdie was given a chance to build his thesis project as an experiment in prefabrication (modular construction) and social housing for the 1967 Expo. According to Wikipedia:

Habitat 67 comprises 354 identical, prefabricated concrete forms arranged in various combinations, reaching up to 12 stories in height. The complex originally contained 158 apartments, but several apartments have since been joined to create larger units, reducing the total number. The development was designed to integrate the benefits of suburban homes—namely gardens, fresh air, privacy, and multileveled environments—with the economics and density of a modern urban apartment building. It was believed to illustrate the new lifestyle people would live in increasingly crowded cities around the world.

In the 1970s, Rotterdam’s planners attempted to connect two residential areas over a busy road. The answer was a housing complex featuring Cube Houses. With 38 regular units and two “super-cubes,” each slanted cubic residence is held up by a hexagonal pillar, some of them atop a pedestrian bridge spanning the four-lane Blaak Street. The design solved the urban planning problem, and it created some highly unique residences in the process.

In the U.K., a noteworthy public housing program was carried out in the form of “council housing,” often through often exciting architectural solutions. One such design was the “ziggurat” type of housing estate, where the design and arrangement of the building often protect against an environmental disturbance, such as a road or a train line. The Alexandra Road Estate in the London borough of Camden was completed in 1978. Along with apartments, the site also includes a school, a community center, a youth club, a heating complex, and parkland.

A most radical attempt to integrate housing with the automobile infrastructure was created in Berlin. In 1981, the city experimented with a housing scheme over the newly opened A100 Autobahn. Autobahnüberbauung Schlangenbader Strasse created 520 new apartments for varying income groups while minimally occupying undeveloped land.

Not every experiment addresses the functional or social aspects of living. Some simply focus on creating a different kind of aesthetic. The oft-criticized “boxy” and homogenous appearances of contemporary housing design led to visual alienation of residents from their homes. There were several interesting responses to correct this. Reasoning that people will feel more attached to their homes if they could influence what it would look like from the public realm, Belgian architect Lucien Kroll involved them in the design of the buildings. His most famous work is the Medical Faculty Housing at the University of Leuven, Belgium (1970–76). These buildings aroused widespread controversy, their fragmented and improvisational appearance—the result of a deliberate participatory design process—a stark contrast to the adjacent massive and repetitive hospital.

Another method to alter the typical building appearance is to involve artists in the creation. The city of Vienna collaborated with painter F. Hundertwasser to create a more humane housing block. Although this style was initially used on a social housing project, it was quickly adapted for several market-rate projects all over Europe.

Starting in the 1970s, Ricardo Bofill embarked on massive social housing production outside Paris, using symbolic elements that gave the cheaply built housing blocks monumental expressions, attempting to create a “Versailles for the People.” Bofill’s “classical” composition was supposed to resolve the monotony of prefabrication. The project also experimented with new ownership models and new family models. People can inhabit two or three modules horizontally or vertically. All financing, construction, and sale of the apartments was handled by the architect.

In Vienna, there were even attempts to create high-rise social living projects as an antidote to the sprawling single-family homes that grew all around. Wohnpark Alterlaa, a residential park, was designed by Harry Glück, built between 1968 and 1985, and contains 3,200 apartments with all the infrastructure necessary for a neighborhood of this size.

The terrace towers are still highly valued by their residents for their quality of life, safety, and diversity of use. Glück’s philosophy was “building for the lower classes with the quality the rich people are fond of—close to nature and water.” For this reason, nearly all his apartments have broad landscaped balconies and a swimming pool on the roof.

Today, design experimentation abroad is alive and well, contributing to a wide variety of housing solutions. In many U.S. cities, several of these possible housing types are not permitted by zoning, directing the available building choices to either single-detached homes or high-density apartments. But this is not the case elsewhere. Having the full spectrum of different building typologies available, new solutions constantly appear.

A spectacular example is the Markthal, located in the center of Rotterdam. Shaped by apartments arranged in the form of a giant arch, the building has a vibrant market square underneath. A series of restaurants activate the ground floor. This is market-rate development that includes a huge public benefit, the market on a new type of public square.

As a multiyear long clearinghouse of experimentation and innovation, the current IBA in Vienna is displaying and celebrating a wide range of built examples. These experiments have gone beyond the realm of design, creating a completely new ecology of urban housing that involves new forms of ownership models, methods of planning and construction, ways of co-housing, financing models, and more, in addition to addressing the many aspects of social integration and sustainability that will remain challenges for the current generation.

It is to be hoped that the U.S can again embrace its experimental origins and try out new ideas and methods. There is ample proof that the conventional methods are not capable of dealing with mounting urban problems. In the U.S., public officials, housing developers, and architects will need to try something new. It’s worth asking them: What do we have to lose? 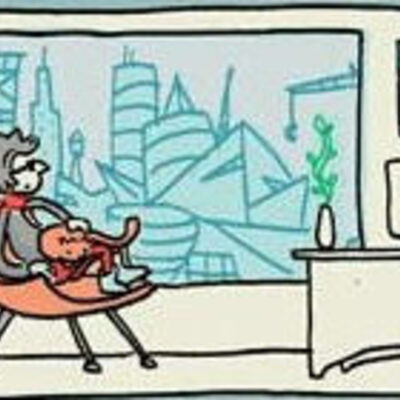 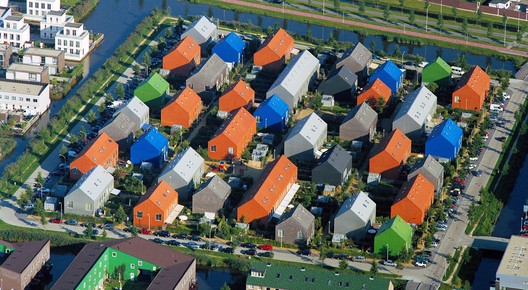