Save
An Indonesian Smart City Design and a Contemporary Art School in Vienna: 10 Unbuilt Projects Submitted by our Readers
Share
Or
Copy

Read on to discover 10 proposals from international competitions and their descriptions from the architects.

“The Infinite City” by AntiStatics Architecture has been selected as the winning design of the new Indonesian Capital City. Currently, in phase two of design, the future forest city will implement smart city technologies through ecologically responsible, modularly efficient, and sustainably local systems. AntiStatics’s vision for the city leverages emerging artificial intelligence design tools for the analysis of the topographically-complex and ecologically-rich site driving towards a metric-driven determination of response. Creating a smart city from the bottom-up will operate in a transformative manner which develops the hardware of the city as informed by smart technologies, rather than seeking to implement city tech upon antiquated infrastructure and insufficient networks.

This project energizes the old industrial community plots by innovatively implanting new elements in the internal space and external volume of the old factory to build the industrial legacy a contemporary celebrity IP, which can be seen as a brand-new landmark of Quancheng. The "old state-owned" Jinan No.1 Factory carries important memories and emotions of Jinan people. Thus, in terms of design, the façade and roof outline of the original factory are kept as much as possible, with minor adjustments of the main entrance and key commercial display areas to meet new functional needs.

The WIENCALL competition organized by Start for Talents sought to imagine a new Art Contemporary School for the city of Vienna. The project takes place in Am Hof Square. RISS –or crack- is the visual representation of the main gesture of the building, a crack that allows people to pass through it. The project incorporated the Mariensäule (or Marian column) to the new building and use it as the central axis of it.

Although the station’s operation was halted in 1997, the building remains an important testimonial of Singapore’s quest to become a highly resilient society. With the injection of the new programs and the conservation of the old charming brick façade, the re-interpret power station serves a dual purpose: It is not only a monumental token to one of Singapore’s oldest industrial district but also a very forward-looking and adaptable space- a creative industries hub where new ideas and innovation that shape and empower the nation are generated.

“Our design goal heads toward to make the new city hall be a cultural platform to draw mainly public‘s involvement. As the existing city hall building to remain is a historical element, we would like to offer a unique architectural feature by embracing the past and making a socially interactive platform through the creation of an artificial hill.” The space created can be used thoroughly for communities. The interiors of the hill will be used for restaurants, shops, library, and exhibition, while the exterior space will generate climbing activities, sightseeing, rooftop cafeteria, and various other personal or public purposes.

The "Wavescape" is a proposal for the revitalization of the abandoned and disconnected urban area along the Honggye Stream in Seoul, transforming and redefining the current environment. We conceive the undulating surface as a social magic carpet that connects the different levels of stream and city. These new surfaces - the intensified landscape - are urbanized both interior and exterior. Wavescape is an extension of a street and a park. It is not a separate and freestanding building detached from the context, but the active mutation between architecture and landscape.

“We believe that at the moment it is not the time to build icons. Instead, we need buildings that will serve not only ourselves, but also future generations”. The new project of Warsaw University building is based on 3 ambitions: providing flexibility in functions and accounting for yet-unforeseen needs through the use of an open structure, minimizing carbon footprint by applying low-emitting materials, and improving life quality by considering the people, those who will eventually use the building.

Kjellander Sjöberg has won the invited design competition for the city block Ribosomen in eastern Hagastaden, a new district in northern Stockholm. Ribosomen is a residential scheme relating strongly to the classical 19th-century urban typology of the Vasastan area. The proposal follows the local urban design principles and takes advantage of the location between two parks, linking them via a passage and an open green courtyard. The block’s footprint is a trapezium, with towers in each corner and lower interconnecting buildings in between.

Architecturestudio NOAN has won the international open competition to design a new city district in Tampere Finland. Located on the southern edge of the current city Centre, this old industrial and water treatment area will become a new part of the city center. The design is based on the three central elements of the identity of Tampere: the waterways in the city as a part of everyday life, the historical red brick buildings, and the future identity of urbanity and high rises.

A mantle of mirrors extends over Piazza Roma, generating a vault in movement thanks to the play of reflections of light and colors that are projected onto its surface. As in the scenography by Josef Svoboda for the "Traviata degli Specchi" the coverage will be the reflection of the entire square, staging the colors of the market, the movement of the children playing, the city life that is found in its square. 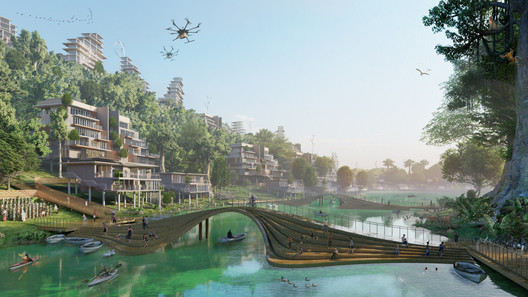