Save
The Times Architects Stepped Up in Crises
Share
Or
Copy

There are plenty of design proposals for post-disaster architecture out there, but it is quite seldom that architects get the chance to put their designs into practice, or help the affected communities in a tangible way. In light of recent global events, it is worth taking a look at how the architecture community can bring its contribution to critical situations.

If one were to name the profession’s leading figure in humanitarian architecture, it would probably be Shigeru Ban. The Pritzker-winning architect is notorious for his involvement and hands-on approach in emergency response, having undertaken disaster relief projects around the world. His work in this field has started with the design of paper-tube temporary homes for the refugees of the Kobe earthquake in 1995. Around the same time, Ban established the Voluntary Architects Network, to provide post-disaster aid. Among his numerous initiatives, he created temporary housing following the 2010 Haiti earthquake and developed a multi-storey housing complex made of shipping containers for the victims of the 2011 earthquake in Onagawa. Ban also designed a temporary cardboard cathedral to replace the one destroyed in Christchurch by the 2013 earthquake and created modular dwellings for the victims of the 2015 Nepal earthquake. In 2017, he signed an agreement with UN-Habitat to design 20,000 new homes for refugees in Kenya.

When an earthquake hit Pakistan in 2005, architect Yasmeen Lari decided to help, so she worked with the affected communities to rebuild homes using the materials at hand, such as bamboo and mud. Since then, she has helped build more than 36,000 homes for flood and earthquake victims in her home country, structures that withstood subsequent natural disasters. In 2007, Lari also built community kitchens in refugee camps. The architect co-founded the Heritage Foundation of Pakistan, an organization which, among others, trains people from rural areas in making building components and products which they can later monetise, helping those communities rise above poverty. Yasmeen Lari was recently awarded the 2020 Jane Drew prize for her extensive humanitarian work over the last two decades.

After the 2016 earthquake devastated several towns in central Italy, the Genoa-based architect was called by the Italian prime minister at the time to lead reconstruction efforts and develop natural disaster prevention strategies. As part of this initiative, Renzo Piano established a research group and created ten prototypes for anti-seismic housing to be built along the Apennines. In 2018, another tragic event hit Italy, with the collapse of the Morandi Bridge in Genoa. In the aftermath of the disaster, Piano, a Genovese himself, offered to donate the design of a new bridge to replace the old one. The structure has recently been completed. Prior to these events, Renzo Piano had also accepted Emergency NGO’s request to design a new healthcare facility, the Centre of Excellence in Paediatric Surgery, in Uganda, currently under construction.

The earthquake that struck central Italy in 2016 resulted in the loss of centuries-old architecture and the town of Amatrice was the most severely affected. Stefano Boeri joined architect Renzo Piano in the reconstruction process, designing a new school canteen for Amatrice. Supported with donations from all across Italy, as well as the architects themselves, the scheme was a first small step towards the reconstruction of the severely destroyed territory. The project then evolved to become Polo del Gusto Square, with the surrounding buildings accommodating eight restaurants. Encompassing a range of different services, the design was part of the attempt to recreate jobs, restart economic activities and revive local tourism.

The charity and design studio began their humanitarian work in 2004, providing educational spaces for the Syrian refugee children in Lebanon. Their approach aims to foster community resilience by involving the users in the planning and construction phases. In partnership with different NGOs and humanitarian organizations, CatalyticAction has designed and built several playgrounds in refugee settlements in Lebanon. In 2016, the practice repurposed the donated materials used for a pavilion at the Expo in Milan to redevelop the Jarahieh Refugee School, formerly housed in a temporary tent.

The Pritzker-winning architect is well-known for his efforts to promote social development and overcome disparity. The “half-finished house” has become a signature for the studio ELEMENTAL, allowing governments to provide housing at a very low price, while still creating quality homes. This design strategy has been incorporated in the replacement of an illegal settlement in Iquique or the Monterrey Housing project in Mexico. The architect also played an essential role in the reconstruction of the Chilean city of Constitución after the earthquake and tsunami of 2010, which resulted in creating a forest to attenuate the effects of future natural disasters, as well as Villa Verde Housing, a residential neighbourhood for 484 of the affected families. To help with the lack of affordable housing worldwide, as well as with the rapid urbanization, Aravena released four of the studio’s incremental housing designs to the public for open source use.

The list could be longer but still manages to prove that in times of dire need, there were architects who answered the call and helped. Whether this deserves praise or is simply a part of the profession's social responsibility is an open debate. These examples serve as a reminder that individual action can make an essential difference in crises when people’s livelihoods are disrupted. 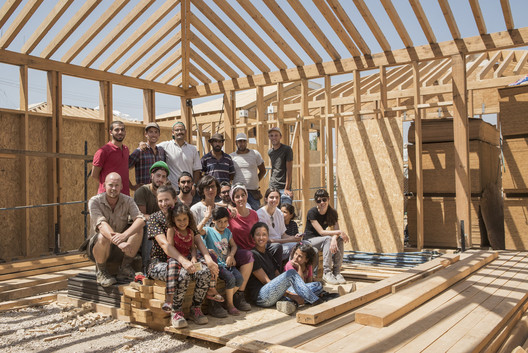