Save
The Humanitarian Works of Shigeru Ban
Share
Or
Copy

The foundation consists of donated beer crates loaded with sandbags. The walls are made from 106mm diameter, 4mm thick paper tubes, with tenting material for the roof. The 1.8m space between houses was used as a common area. For insulation, a waterproof sponge tape backed with adhesive is sandwiched between the paper tubes of the walls. The cost of materials for one 52 square meter unit is below $2000. The unit is easy to dismantle, and the materials easily disposed or recycled.

Proactive Architecture as a Means to Mitigate Climate Change

This community center was built by church volunteers whose house of worship was destroyed by the Kobe earthquake in 1995. Materials were donated by a number of companies, and construction was completed in only five weeks by the 160 volunteers. The plan (10 x 15m) is enclosed within a skin of corrugated, polycarbonate sheeting. Within this, 58 paper tubes (325mm in diameter, 14.8mm thick, and 5m high), were placed in an elliptical pattern. The ellipse is based on those in Bernini’s church designs, and the space between the ellipse and the outer edge of the rectangular-shaped site formed a corridor and provided lateral support. At the entrance to the ellipse, the spacing of the paper tubes was widened, and the facade fully glazed to form a continuous, unified space between the interior and exterior. This church was disassembled in June 2005 and all the materials were sent to a city in Taiwan.

More than 2 million people became homeless when civil war broke out in Rwanda in 1994. The office of the United Nations High Commissioner for Refugees (UNHCR) normally supplied plastic sheets and aluminum poles to be rigged as temporary shelters. Rwandan refugees would sell the aluminum poles and then proceed to cut down trees to use branches for structural support. Contributing to already critical deforestation, it was obvious that alternative materials had to be found. A low-cost alternative, paper tubes, was introduced. The proposal was adopted and the development of prototype shelters began.

Three prototype shelters were designed and tested for durability, assessed for cost, and termite-resistance. Since paper tubes can be manufactured cheaply and by small and simple machinery, the potential to produce the materials on-site to reduce transportation costs. In 1998, fifty emergency shelters were constructed in Rwanda and monitored to evaluate the system in practical use.

Located on the south-east coast of Sri Lanka, Kirinda is a village of the Islamic community of fishermen. Because of the Sumatra Earthquake on December 26, 2004, most of the buildings of the village were swept away by Tsunami. The villagers were forced to live in temporary houses under the serve situations. This post-tsunami rehabilitation project includes the construction of 67 houses and a mosque and tree plantation.

Each house has two bedrooms, a hall, and a roofed court which is a semi-open space. The hall and the roofed court could be a large room. However, to respect the lifestyle of the villagers, these rooms are separated by folding doors. It is necessary for women to avoid seeing their guests in person. The roofed court is a space like the shade of a tree, which protects from direct sunlight and ventilates through the house. Therefore this space plays an important role in the life of inhabitants; having a meal with family, enjoying socializing with neighbors, and repairing their fishing nets and equipment.

Since this is a rehabilitation project, the importance is low budget and reduction of the construction period. The principal material is CEB (compressed earth block) which is available in Sri Lanka with row cost and doesn't need trained constructors. The block has an uneven surface so that it can be easily interlocked and built up like LEGO. In addition, the furniture units are also placed in the house. They are made ​​of rubber tree which isn't normally used for architectural material, but in Sri Lanka tire industry is popular, so the trees are planted over the country.

This collaborative project between Japanese and Chinese universities involved the design and construction of paper-tube-structured temporary classrooms at the elementary school struck by the Sichuan earthquake in May 2008. While most of the reconstruction assistance consisted of constructing temporary housing, we received a request from the Chengdu Chenghua District Education Bureau to rebuild the classroom buildings.

These buildings had been officially designated as unusable and had been completely closed as part of the delayed reconstruction of educational facilities. We, therefore, designed temporary classroom buildings to be constructed using paper tubes, which are cheap, recyclable, reusable, and readily available on site. During the summer vacation, about 120 Japanese and Chinese volunteers worked together on the construction while deepening mutual understanding. We developed simple building methods and plans suited to unskilled people such as volunteers. With appropriate construction management, three buildings (nine classrooms) were completed in about forty days. These were the first buildings in China to have a paper-tube structure and were also the first school buildings to be rebuilt in the earthquake-stricken area.

In response to the earthquake that occurred on April 6, 2009, in L'Aquila, Italy, the G8 Summit of nations was held there in July of the same year. The Japanese government announced its plan to build a temporary concert hall, proposed by Shigeru Ban, to support the reconstruction of the city, famous for its music scene. The aim was to construct a paper concert hall that is easy to assemble and durable, for an early resumption of musical activities in the city.

The evacuees of the great Japan Earthquake and Tsunami are currently taking shelter in evacuation facilities such as gymnasiums. They are forced to live in this situation for a few months before temporary housings are deployed. They suffer from a lack of privacy and high density, which could cause damage both mentally and physically. We are currently making simple partitions made of paper tubes and canvas curtains to divide each family. This disaster relief endeavor will be financed with donations from around the world.

Since the 2011 Japan earthquake, Shigeru Ban Architects have visited more than 50 evacuation facilities and installed over 1800 units (2m x 2m) of our Paper Partition System, to ensure privacy between families. During that time, I heard the news that the town of Onagawa was having difﬁculty to construct enough temporary housing due to the insufﬁcient amount of ﬂat land. Therefore, we decided to propose three-story temporary housing made from shipping containers. By stacking these containers in a checkerboard pattern, our system creates bright, open living spaces in between the containers. The standard temporary houses issued by the government are poorly made, and there is not enough storage space. We installed built-in closets and shelves in all of our houses with the help of volunteers and with the donation fund. It will become a breakthrough and precedent to new government standards of evacuation facilities and temporary housing.

The 2011 Christchurch earthquake inflicted crippling damage on the Christchurch Cathedral which was the symbol of the city. In response to this situation, we were asked to design a new temporary cathedral. Paper tubes of the equal length and 20 ft containers form a triangular shape. Since geometry is decided by the plan and elevations of the original cathedral, there is a gradual change in each angle of paper tubes. This cathedral, which has a capacity of 700 people, can be used as an event space and a concert space. There was a media conference in Christchurch on the 31st of July, 2011. 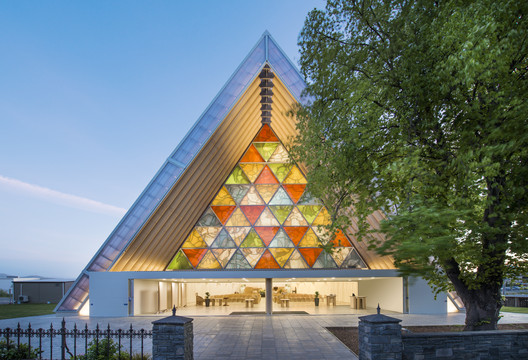