If there is a time when an architect can work without limits, it's during a self-commissioned project. When architects design for themselves, or, in other words, are their own clients, they get the opportunity to their discipline with no restrictions, producing works that reflect everything they believe about light, space, and everything in between.

In this article, we follow 14 architects from Argentina, Brazil, Chile, Colombia, Mexico, and Uruguay who have challenged themselves to design their own homes:

Eduardo Catalano built his house between 1953 y 1955 in Raleigh, North Carolina, USA. Even though the home was considered an icon of modern North American architecture in the 50s, it fell into deterioration and was demolished in 2001. The house's design was simple and followed a unique floor plan, divided between daily and nocturnal activities. The service spaces were based around a central nucleus in relation to the kitchen.

The Acquarone-Hirsch House, located in the Vicente López neighborhood of Buenos Aires, was a house designed by and for Elena herself. Built in a residential zone characterized by low houses, the home consists of 2 levels, with the ground floor connecting to a large garden. Built between 1974 and 1976, the home was completed during a time when Acquarone homes were at their peak of production. During those years, while also undertaking her personal projects, Acquarone collaborated with architects like Clorindo Testa, Hector Lacarra, and Juan Genoud. Currently, the home was acquired by the DHNN creative agency and its remodelling was completed by the Dynamo studio, who transformed the house into office spaces for the company.

The Capotesta House, designed by Clorindo Testa and built between 1983 and 1985, is located in the coastal town of Pinamar. This house wasn't built for any client, rather, Clorindo designed it for himself in a vacant lot in the northern reaches of the town. The house is located in a small wood, close to the seashore and maintains a simple morphology. The floor plan is built around two levels within a cubic volume. Within the principal volume there are 3 prolongations that make up the terrace on the first floor.

La Casa Das Canoas, or The "Two Canoes House" was designed by Oscar Niemeyer in 1951 to be his personal residence. Located in Canos, Rio de Janeiro, the house is considered as one of the best examples of modern Brazilian architecture. Currently, it is catalogued as a cultural heritage site (according to the National Institute of Historic and Artistic Heritage) and its conservation is under the care of the Oscar Niemeyer Foundation.

The Glass House was the first project built by Lina Bo Bardi. Located in Morumbi, to the south of Sao Paulo, the house was designed to be the personal residence of Lina and her husband. The house, meant to be open to the natural elements surrounding it, shows a painstaking dedication to detail and seems to float above the ground thanks to the new industrial techniques of that time. The strong slope of the landscape and the overwhelming presence of vegetation were fundamental elements in designing the home.

After acquiring some plots of land in the Cabral Neighborhood (Curitiba) in 1963, Jaime Lerner set to work designing his personal residence. His own brother, civil engineer Julio Lerner, oversaw the technical aspects of the project. The home followed a simplified floor plan: a living room, a utility room, two bedrooms, a bathroom, a kitchen, service quarters, and a studio on the second floor of the house. In 2002, the family moved to another property and the following year, in 2003 the house became the Jaime Lerner Institute as well as the offices for Jaime Lerner Associated Architects.

Located in the Las Condes sector of Santiago, Chile, the Duhart house was a self-commissioned work that allowed Emilio the opportunity to design and render his ideas about domestic architecture into reality. The home is organized around 4 patios, each with their own use and unique views. The materials used include reinforced brick work, stone finishing, and wooden coverings.

La Casa Cien is the private residence and studio of architectural duo Mauricio Pezo (Chile) and Sofía von Ellrichshausen (Argentina). The house is centered around 2 levels while also boasting a 5 story tower built from a series of square 6 m2 modules. The basement, partially submerged underground, includes a workshop, a kitchen, a dining room, and a living room. The first two levels of the tower contain bedrooms while the remaining three levels provide spaces for work and study. Two stairways leading to different parts of the house separate the work and living spaces. It's in the home's apparent simplicity that its beautiful complexity is found.

The Bosque Izquierdo House is built on a 20 x 20m plot of land acquired by Jacques Mosseri and his wife, plastics artist Ana Mercedes Hoyos, and serves as their private residence. The house measures a modest 13 x 13 meters, leaving plenty of open outdoor space to take in the mountain views that surround the property. The house itself has the look and feel of a monastery that showcases the creative symbiosis between Jacques and his wife.

The weekend home of Rogelio Salmona, built in 1997 on the outskirts of Bogota, picks up on several elements that the architect had experimented with in earlier projects--like the use of brick and portable walls and domes-- The house emerges from the ground as if it itself were part of the natural landscape.

Designed in 1948 by Luis Barragán, and inhabited by him until 1988, this home-studio incorporated elements of both Mexican and modern traditional architecture. Barragán added his personal touch to the design and divided the floor plan in a way that would allow him to create a variety of spaces within the house without affecting the integrity between them. In each sector, Barragán utilized different resources that added to the fluidity of the space: the shadows, the colors, and contracting and expanding of the space all add to its richness.

Completed in 1998, the home of Teodoro González de León is marked by the lightness and fluidity found between its interior and exterior. The spaces are organized around a patio, a classic feature of Mexican home in the 20th century. With the extensive use of white, Teodoro was able to manipulate the light of the space with magnificent precision. The house is not the first that the architect built for himself, but the third. In the first house he lived for more than a decade while only staying in the second for a few years.

The home that Julio Vilamajó built for his own family in 1930 in Montevideo serves as a sort of album of set designs meant to enrich everyday life. This same house was projected during a stage in Vilamajo's life that was driven by renovation and experimentation with expressive language, which perhaps explains its characteristic restlessness.

La Casa Dieste is located on a 12 x 50m plot of land in Punta Gorda, Montevideo. The house was once the residence of its creator, his wife, and their 11 children. The entirety of the construction-the walls, floors, stairways, and domes- is made of brick.  In the Dieste house, "two worlds coexist": the casual, the mundane, and the accidental, together with the rigorous order of the structure itself. The use of geometry and a precise sketching serve as the instrument for giving the project its shape. 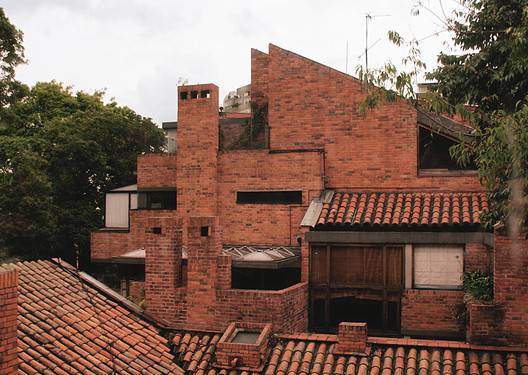