Save
Bringing Work Home: 9 Times Architects Designed for Themselves
Presented by 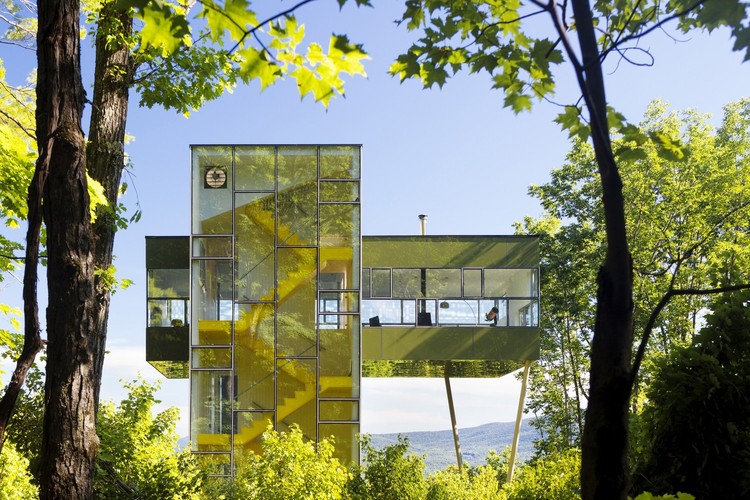 The flat, unassuming façade of Casa Barragan gives no hint to what is held within. Described as an oasis - a sanctuary that keeps out the “urban chaos” - the discrepancy between the façade and the interior highlights Barragan’s desire to design a highly private, intimate space within its walls. The windows are smaller and higher towards the front of the house, letting in light while maintaining privacy. On the opposite facade, huge windows at the back of the house open up to a spectacular view of the garden. The windows allow poetic filterings of natural light to flood the residence, illuminating the characteristically Barragan walls of pink, orange and yellow. Relics and symbols are placed and hung throughout the house, creating a deeply personal space. After Barragan's death in 1988, Casa Barragan was transformed into a museum that showcases his iconic architecture style to visitors from all around the world. It was later named a World Heritage Site by UNESCO in 2004 as one of the most influential and representative examples of modern Mexican architecture.

In alarming proportions the following words have disappeared from architectural publications: beauty, inspiration, magic, sorcery, enchantment. And also: serenity, mystery, silence, privacy, astonishment. All of these have found a loving home in my soul

In 1977, Frank and Berta Gehry bought an existing 1920 bungalow in Santa Monica, California, and transformed it into what is now a symbol of deconstructivism. Using distinctive materials that contrasted with the original building, such as corrugated steel and chain-link fencing, Gehry built an entirely new structure that wrapped around the existing Dutch colonial home. The exterior of the house is almost untouched, peeking through the bold disarrangement and jutting of forms at the front of the house. Some areas of the existing interior have been stripped to expose the framing, joists and wood studs underneath, while irregular skylights give the impression that someone has hacked at the building indiscriminately.

I loved the idea of leaving the house intact... I came up with the idea of building the new house around it. We were told there were ghosts in the house... I decided they were ghosts of Cubism. The windows... I wanted to make them look like they were crawling out of this thing. At night, because this glass is tipped it mirrors the light in... So when you're sitting at this table you see all these cars going by, you see the moon in the wrong place... the moon is over there but it reflects here... and you think it's up there and you don't know where the hell you are..

The Lyon Housemuseum is exactly what it sounds like – a private family house that doubles as an art museum. Located in Melbourne, Australia, it explores the juncture between visiting and living, public and private, and art and architecture. The Housemuseum is designed by architect Corbett Lyon of Lyons Architecture, who lives there with his wife and children. Open for public viewing on designated days each week, the family kitchen begins to double as a museum café, while the black box for video art installations doubles as a home cinema for family movie nights. These strange double-ups challenge the notion of public and private, and what a house can be. The Lyon Housemuseum also hosts a variety of cultural events throughout the year, from concerts to artist and architectural talks.

Visitors are always interested to see a personal, idiosyncratic collection which represents something about the mind of the collectors and the group of artists, and works, which make up the collection. It is very different from viewing works in a public collection

The Summer House in Dalarna was designed by architect Leo Qvarsebo for himself and his children. Located in the picturesque landscape of rural Sweden, the triangular house is whimsical and playful. Its triangular form allows the sloping façade to become a climbing wall, with a rope connected to its roof. Its unique form also creates a pyramid of spaces within, where the bottom level holds a spacious living room and kitchen, while the subsequent spaces become smaller and smaller as you move up. The large windows of the design make use of the beautiful landscape it is situated in, encouraging the inhabitants to interact with the view outside.

The house is a bit like a treehouse for adults. The climb to the top is via several levels and offers both views and privacy. From each level of the house you can see up to the next, creating a curiosity to continue to climb and once you're up, the view is breathtaking

Konstantin Melnikov’s Melnikov House is an iconic symbol of 1920s Russian avant-garde architecture. Located on Krivoarbatsky Lane in Arbat, Moscow, the cylindrical form of the house is strikingly unique, both when viewed from the exterior and in the beautiful interior spaces it creates. Melnikov was one of only a few people who managed to retain their land following the fall of Lenin’s New Economic Policy, and the draft design was surprisingly passed by the district commission as an experimental project. Constructed from a honeycomb lattice of local brick, the design consists of two intersecting cylindrical towers. The cylindrical form stemmed from the rationing of materials at the time and Melnikov’s belief that the cylinder would allow more efficient use of material. Similarly, the hexagonal windows are a direct result of the honeycomb structure. The interior spaces move upwards with a winding staircase, from living spaces on the ground floor to a double-height studio space and rooftop terrace. The quasi-open plan and hexagonal windows allow natural light to flood into the interior, creating interesting plays of light across the open space.

Cien House is architect duo Mauricio Pezo and Sofia von Ellrichshausen’s private home and studio for their small practice, Pezo von Ellrichshausen. For their own home, Pezo von Ellrichshausen have used approaches explored in their previous residential projects, such as the layering of a rectilinear grid and the use of solid, monolithic forms. Cien House consists of a 2-storey podium and a 5-storey tower above, all planned through the repetition of square 6m² modules. The podium is partially submerged in the Chilean countryside, with a basement workshop on one level and cooking, dining and living on the other. The two levels above contain bedrooms, while the top three levels are workspaces and studios. Two staircases leading to different parts of the house separate the realm of home from the realm of work. The apparent simplicity of the design and planning hides layers of intricacy and moments of beautiful complexity.

What’s nice about this house is it’s so rough and everything’s so incomplete. In a way it feels like it was born old

Designed by Charles and Ray Eames, the Eames House was initially created for the Case Study House program to explore the possibilities of new technologies and pre-fabrication. However, the house was so successful that the architects moved into the home themselves. The Eames House consists of two boxes separated by a courtyard, with one box as a residence and the other as a studio. The boxes were constructed with a simple steel frame, with solid and transparent coloured panels in a Mondrian-esque pattern. The panels create a soft, shifting light throughout the day, adding to the warm, intimate atmosphere of the interior. Through its natural materials and the Eames’ collection of artworks and artefacts, the house consists of beautiful spaces that flow into one another without any harsh divisions.

The Tower House acts as a weekend retreat for Thomas Gluck, one of the principles of Gluck+. The focus of the design was to minimise the building’s footprint to not disturb the site it sits within. This was achieved by flipping an average 3 bedroom house onto its side, creating three storeys of stacked ensuites with a top storey that spreads out to hold the living spaces. To create a house that remained energy efficient when not in use, the architects stacked the kitchen and bathrooms in an insulated central core, allowing parts of the house to be “turned off.” The house is beautifully detailed, with a glass-encased bright yellow staircase and a stunning view from the top storey.

Ryo Yamada’s playful house aims to create an ever-changing interior space. The house is located in northern Japan, where Winter can result in 5 metres of snow pile-up. Yamada wanted to design a space that focuses on efficient heating and where his family could be entertained and enjoy themselves inside for long periods of time during heavy snowfall. Based on traditional Japanese sizes in architecture, the pillars are installed at intervals of 1.82 metres, the length of a tatami mat. The wooden grid of beams and pillars create a framework where treehouses and other structures can be built, constructing a whimsical landscape that is only bound by the imagination.

If this house could speak, it would say, ‘I dream never to be completed 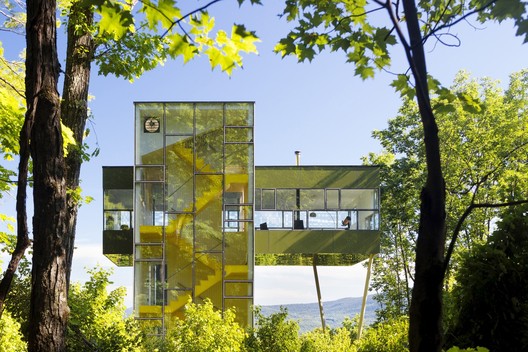