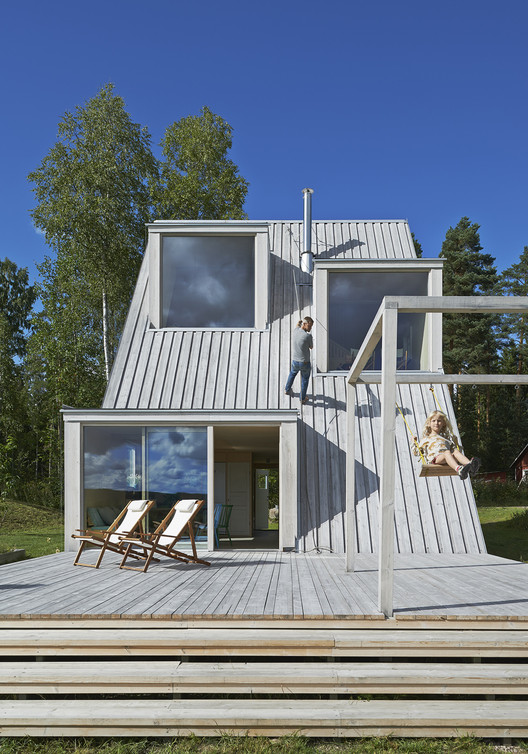 Text description provided by the architects. The requests in this project are obvious yet challenging: Cooking outdoors and indoors. A quiet reading area and a bedroom beneath the stars. All three requests has each been associated with a bay window and then superposed under a roof that turns into a terrace in front of the house. In total there are 8 rooms including two huts, three terraces, 8.5 meter ceiling on a total surface of about 85 sqm.

The project is struggling with an almost contradictory problem; the plot is almost too simple. Views, sun, sea and cow pasture lies to the south. To the north a dense forest. In addition, the plot is completely flat and lacks trees as it was former was a cow pasture. Exploiting the view is obvious but architecture should deal with more than that and let its inhabitants be able to interact with their environment.

The house is a bit like a treehouse for adults. The climb to the top via several levels and offers both view and privacy. From each level of the house you can see up to the next, creating a curiosity to continue to climb and once you´re up, the view is breathtaking.

The house is made of wood from inside to the outside. Inside, the ceiling, walls and floors covered with plywood from a closed puzzle factory. Doors and windows are second hand findings and furniture are built on site of plywood. The frame is made of wooden beams forming an A from the foundation to the top. Roof and walls are made from Swedish pine.