Skyrocketing prices of London housing have become so unbearable that many have turned to less-than-ideal compromises. Large homes can be found but come with commutes of hours; places are still available in the city, but only for those with sky-high paychecks. Unable to balance their needs, people are resorting to workarounds that disrupt the existing urban fabric and dissatisfy all involved. Surely we can do better.

Architecture competitions have always contributed in stimulating public interest and have generated numerous community-oriented designs. Bee Breeders's recent competition challenged designers to take on this issue, calling for inventive solutions to London's housing crisis as part of its Affordable Housing Crisis Design Series. Common themes and ideas emerged among the entries: the construction of new housing systems, rehabilitation of public spaces, new methods for land ownership. But the winners addressed the global demand for affordable urban housing in an innovative and sustainable approach.

The winners and shortlisted projects of the Bee Breeders London Affordable Housing Challenge, after the break:

1st Prize - Beyond the Shell

The winning proposal checks all the boxes when it comes to providing solutions to the housing crisis in London. The designer took advantage of the free-form design, affordable cost, and rapid construction provided by 3D printing, and created exquisite-looking mass housing complexes that take shape and adapt with their residents. The foundation infrastructure is designed in a grid-like frame, allowing an infinite range of curvilinear, organic designs, manufactured with digital fabrication tools transported in mobile trucks.

The 2nd-place project took a different, yet favorable approach to resolving to the housing crisis. The proposal focused on the importance of having a well-designed interior layout that caters to more than one individual. According to the designers, cohabitation and reorganization of the layouts of existing buildings creates more efficient spaces and can accommodate larger groups of inhabitants. Accordingly, the designers rearranged the the interior layout of a typical London housing block, and offered an array of flexible interior layouts, with an adjusted bathroom core, movable partitions and equipped wall fittings, housing a mixture of personalities and profiles.

A user-oriented, modernist approach landed the 3rd-place prize, dismissing the “one-size-fits-all” architecture typology. Flexibility and spatial combinations were key words in the development of the project’s design, as the designers focused on providing a variety of spatial sequences and flexible rooms, instead of resorting to standardized architecture principles.

The Student Award was granted to a community-oriented project that focuses on affordability and shared profit. The proposed ‘Community Land Trust’ helps develop rented-only accommodation modules for small/medium enterprises using the profit earned by existing community developments. Maintenance and services of these emerging enterprises and modules is also acquired by these profits, while the district heating and electricity is granted by the local waste, heat, and energy generated by the district’s warehouses.

The Green Award is granted to the project with the most innovative eco-friendly proposal, and this year, the winners of the award offered a sustainable rehabilitation and active frontage of the large-scale post-war buildings and their urban context. The designers created a new ‘narrow-housing’ typology veiled with a green facade, densifying the city’s urban landscape at a human scale. The proposed Hedge House is designed to sit between the park and streets, acting as a natural border of the park with its green facades and shared roof terraces, and promoting communal well-being. 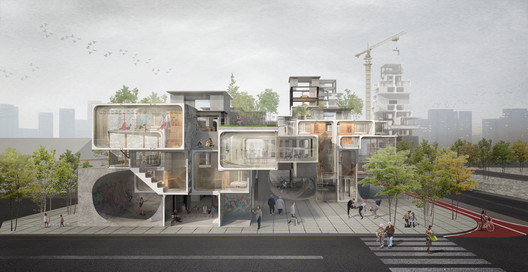