Save
What If MOMA Had Expanded Underground (And Saved The American Folk Art Museum)?
Share
Or
Copy

In January of this year, the latest work by Smiljan Radic, the Chilean architect chosen to design the next Serpentine Pavilion, opened to public acclaim. The Museum of Pre-Columbian Art (Museo de Arte Precolombino), located in Santiago de Chile, is a restoration project that managed to sensitively maintain an original colonial structure - all while increasing the space by about 70%.

Two days before the The Museum of Pre-Columbian Art opened, the Museum of Metropolitan Art (MOMA) in New York issued a statement that it would demolish the American Folk Art Museum (AFAM), designed by Tod Williams Billie Tsien Architects, in order to accomplish its envisioned expansion. Two weeks ago, preparations for demolition began.

Some background: MOMA had hired Diller Scofidio + Renfro a year earlier to design the expansion. The office asked for a period of six months to consider the possibilities of integrating the American Folk Art Museum into the design. After studying a vast array of options (unknown to the public) they were unable to accommodate MOMA’s shifting program needs with the AFAM building. They proposed a new circulation loop with additional gallery space and new program located where the AFAM is (was) located.

What appears here is not strictly a battle between an institution that wants to reflect the spirit of the time vs a building that is inherently specific to its place. It represents a lost design opportunity. What if the American Folk Art Museum had been considered an untouchable civic space in the city of New York, much like the The Museum of Pre-Columbian Art is for the city for Santiago? Then a whole new strategy for adaptive reuse would have emerged. 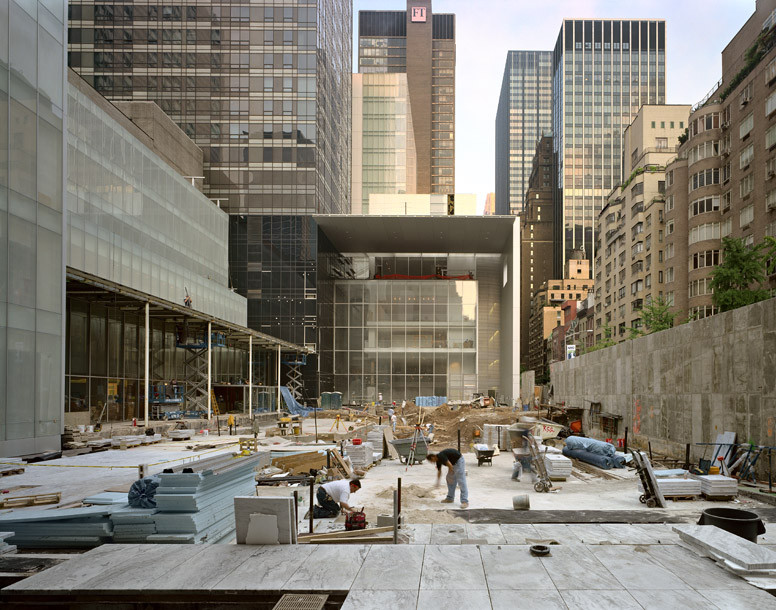 First, I would like to admit that I have not been to the expansion of the The Museum of Pre-Columbian Art, although I have seen snapshots of the new space and the construction process. I have read local newspapers about the project's opening, although they in no way give this extremely strong piece of architecture and urban space justice. The best source I have found on this project is Smiljan Radjic’s monograph in El Croquis No.167, which contains a brief description of the project, models, and drawings.

The project is situated one block from the Plaza de Armas, the central square of Santiago, which is part of the historic center. The building, designed in 1805 by Joaquin Toesca, is both colonial and neoclassical. Like other buildings of its era, it follows a courtyard typology. The building halls are organized around two patios that open towards the street.

Through its history it has housed a variety of functions, originally serving as an administrative building and then as the National Library. From 1845 until the late 1960s, it was the Court of Justice. In the 1980s, it went through a restoration process and became the Museum of Precolumbian Art.

The initiative to renovate the building again was led by Sergio Larrain Garcia-Moreno, an architect known for bringing modern architecture and urbanism to Chile. The museum was to house a series of objects and artifacts that he had collected from different places in Central and South America, showing the cultural diversity of those regions.

The architect Smiljan Radic was in charge of the restoration and additionincreasing the original space by about seventy percent and bringing the new building to a total of 1300 square meters. In order to increase the space without affecting the original building, two basements were added under the existing courtyards. A new concrete staircase connects the original building to the underground addition, a large, open 38 x 11 x 7 meter space of dark gray concrete and IPE wood (similar to that used for decking). There is one skylight on each end, bringing light from the courtyards into the galleries.

There are several different elements that intrigue me about this museum space. It breaks with the tendency of the museum to be a white box or a sanitized white gallery and uses vast open space to display art work in a flexible arrangement. Also, the existing space is taken as an untouchable given and only amplified upon; therefore, the historical building becomes an opportunity for the architect, not an obstruction. Openness and transparency are achieved without making the building look like an Apple store. The dark but rich materials add to the experience of being underground, giving the feel of exploring an archaeological dig.

Moreover, the renovation and addition of the museum is part of a larger project by the Chilean Government (The Legacy of the Bicentennial Project) to renovate patrimonial buildings in historic Santiago and to build and renovate cultural and public spaces around Chile. In other words, the museum is not an object but a part of a larger urban fabric.

If the American Folk Art Museum had been considered untouchable, an addition could have been built underground, below the sculpture garden or the AFAM itself. This would have created both flexible spaces for displaying art as well as amplified civic space considerably, not to mention opened up the programmatic relationship between ground plane and basement.

Even if building underground was not an option, there were infinite ways of expanding without having to raze the building: expanding vertically through stacking , developing unconventional lateral strategies like building cantilevers, parasites, or appendages; creating a hybrid system of vertical and lateral expansions.Radic’s expansion of The Museum of Precolumbian Art sets a precedent in this regard.

The MOMA proposal does not embrace a new attitude in design in order to develop a compelling solution to preserving the AFAM. The city of New York will get the expected: large, transparent panes of glass and generic white sanitized spaces “a la” an Apple store or a Chelsea art gallery. But that has already been done. If the MOMA really wanted to be modern and provide something new, then it would have tried something different, perhaps something unconventional,maybe even underground.

B. Deland Pollak is an architect and designer trained at Rice University in Houston, TX. Originally from Santiago de Chile, he has worked in offices in New York, Beijing, and Shanghai. He is the founder of "Pick-Up Sticks", an online cluster of architectural ideas and technologies.