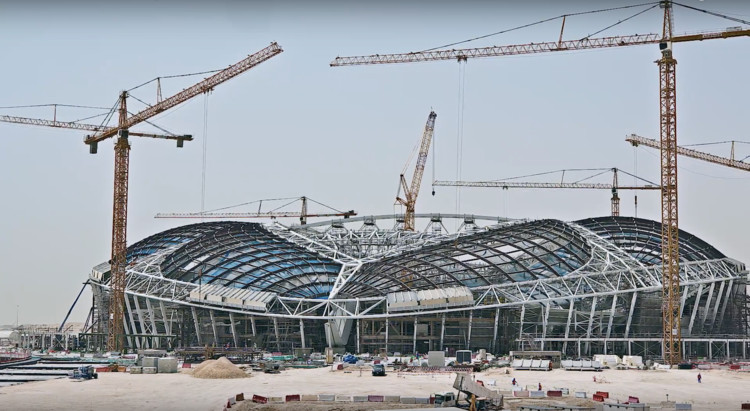 Pablo Pinares has created a video with which all past and current architecture students can identify: a time lapse of the final hours before a studio review. Whether your architecture school days are behind you or you still have juries to look forward to, read on to revel in your school experiences with us.

Photographer and filmmaker Joe Capra, known for Scientifantastic, filmed and produced the video '10328x7760 - The 10K Demo', which is exactly what the title implies, a timelapse video resolution in 10K of the city of Rio de Janeiro. For those who are not familiar with the technical specifications, this resolution is about 10 times higher than the traditional Full HD (1920 x 1080px), which is the maximum resolution of most monitors sold today.

The system, which is easy and fast to assemble, combines scaffolding with natural materials that are easy to find, such as gravel, sand or earth, providing thermal insulation. Containers to channel and reuse rainwater are also incorporated. Watch the timelapse video above to see RE:BUILD in action and learn more about how it was used to build schools for refugee children in Jordan here.

In recognition of the opening of One World Observatory in New York City, EarthCam has published a full time-lapse of One World Trade Center's construction. Thousands of high-definition images capture the incredible undertaking of construction and planning that took place from October 2004 to Memorial Day 2015. The camera flies the viewer across the site, showing how the building and its surroundings have taken shape over the past 11 years.

When the One World Trade Center opens its observatory elevators in May, visitors will embark on an unusual journey back in time with animated timelapse that recreates the evolution of Manhattan's skyline starting from the 1500s. In just 47 seconds, visitors will relive the city's architectural history, including the devastation of 9/11, while being lifted up 102 floors. Watch the video above, courtesy of The New York Times!

It’s no wonder that the beautiful city of Rio de Janeiro is one of the most visited cities in the southern hemisphere. From Copacabana’s Balneario Beach to the iconic Cristo Redentor atop Corcovado, Rio is a “cidade maravilhosa” (marvelous city) with one of the most spectacular urban settings in the world. Capturing its mystic, the pros of Scientifantastic have posted a stunning time-lapse that captures life in the coastal Brazilian megalopolis.

Another, revealing the favelas of Brazil and more, after the break.

Harvard Art Museums have released this time-lapse video of their recently completed four-year renovation and expansion project carried out by Renzo Piano Building Workshop and Payette. Filmed from June 2010 – November 2014, the video shows the amount of work that went into renovating, expanding and uniting the Fogg Museum, the Busch-Reisinger Museum and the Arthur M. Sackler Museum under the same roof. Watch as snow falls (and then melts) on the construction site in the full video above and learn more about the project here.

These mesmerizing time-lapse videos by photographer Mayeul Akpovi allow you to see several French cities like never before. Combined with captivating soundtracks, the videos show the architecture of Paris, Marseille and Lyon throughout the day with changing light and varying levels of activity. Above, Part I of Paris in Motion displays shots of clouds moving across the sky, reflections on the Le Grande Louvre, La Grande Arche. Check out the remaining six videos after the break.

TimeLAX travels across the sprawled city of Los Angeles, connecting some of the city’s most iconic landmarks - Disney Concert Hall, the Griffith Observatory and John Ferraro Building - with over 200 locations that reveal the true essence of the city’s fabric.

Part 2, after the break.

NASA, in cooperation with TIME and Google, has unveiled startling timelapse images of Earth from orbit collected by NASA's Landsat program since 1984. This program, created not for spycraft but for monitoring the way in which humans are rapidly altering the surface of the planet, consists of eight satellites that have collected millions of pictures in the course of two generations. When sifted through, cleaned up and stitched together, these pictures come together to create a high-definition slideshow that reveals some of the drastic changes our planet is undergoing - most notably through widespread urbanization.

Video: This is Shanghai

A little over thirty years ago, Shanghai was a fairly dense, mid-rise city with no skyscrapers. Now, Shanghai has been transformed into a global metropolis with over 4,000 skyscrapers - twice as many as New York. In an attempt to capture the “diversities and eccentricities of the metropolis that is Shanghai beyond the famous skyline,” photographer Rob Whitworth and urban identity expert JT Singh joined forces to create ‘This is Shanghai.’

Check out this Vimeo Staff Pick, filmed by dimid, that captures the towering city of Dubai.