One World Trade: The Latest Architecture and News

Sounds of rushing water have been reported behind the walls of the lower concourses of the World Trade Center site. As DNAinfo reports, rumors say officials have found an underground leak within the newly built complex and fear that it may be coming from the 3,200-foot-long slurry wall that separates the site from the Hudson River.

In recognition of the opening of One World Observatory in New York City, EarthCam has published a full time-lapse of One World Trade Center's construction. Thousands of high-definition images capture the incredible undertaking of construction and planning that took place from October 2004 to Memorial Day 2015. The camera flies the viewer across the site, showing how the building and its surroundings have taken shape over the past 11 years.

When the One World Trade Center opens its observatory elevators in May, visitors will embark on an unusual journey back in time with animated timelapse that recreates the evolution of Manhattan's skyline starting from the 1500s. In just 47 seconds, visitors will relive the city's architectural history, including the devastation of 9/11, while being lifted up 102 floors. Watch the video above, courtesy of The New York Times!

Santiago Calatrava’s head-turning World Trade Center Transportation Hub has assumed its full form, nearly a decade after its design was revealed. In light of this, the New York Times has taken a critical look at just how the winged station’s budget soared. “Its colossal avian presence may yet guarantee the hub a place in the pantheon of civic design in New York. But it cannot escape another, more ignominious distinction as one of the most expensive and most delayed train stations ever built.” The complete report, here.

Kimmelman Reviews the One WTC: An Emblem of New York’s “Upside-Down Priorities”

Nearly a month since the official (and somewhat mundane) opening of New York’s One World Trade Center, New York Times architecture critic Michael Kimmelman has published a scathing review of the SOM-designed tower, claiming it to be a “flawed” emblem of the city’s “upside-down priorities.”

The first tenant has moved into the One World Trade Center, making Monday, November 3, the official opening of the (arguably) tallest building in the Western hemisphere 13 years after the tragedy of 9/11. The “extraordinary moment was passed in the most ordinary of ways,” described the New York Times, as employees of Conde Nast entered into the white marble lobby (taken from the same quarry that produced marble for the original twin towers) and headed straight to the elevators to start their work day.

To celebrate its completion, renowned architectural photographers Iwan Baan and James Ewing took it to the sky to capture the One World Trade Center in all its glory. The images, after the break.

In Defense of Rewarding Vanity Height

Recently, ArchDaily editors received an interesting request from an anonymous Communications Director of an unnamed New York firm, asking us “In your reporting, please do not repeat as fact, or as "official," the opinion that One World Trade Center in New York will be the tallest building in the United States.” He or she goes on to explain that the decision maker who 'announced' the building as the tallest in the US, the Council on Tall Buildings and Urban Habitat (CTBUH), is not officially endorsed by the AIA or the US Government, and that while their work is beneficial for architecture and cities as a whole, their criteria for height evaluation are flawed and have been criticized by many in the industry.

The desire to have the tallest building in a city, country or even the world goes back to at least the medieval period, when competing noble families of Italian hill towns such as San Gimignano would try to out-do each other's best construction efforts (jokes about the Freudian nature of such contests are, I imagine, not much younger). Perhaps the greatest symbol of this desire is the decorative crown of the Chrysler Building, which was developed in secret and enabled the building to briefly take the prize as the world's tallest, much to the surprise and ire of its competitors at the time.

With this competitive spirit apparently still very much alive, I thought it might be worthwhile to address the issue raised by our anonymous friend.

Today, TIME unveiled "Top of America," a multimedia site relaying the gripping story of One World Trade, the David Childs-designed skyscraper that stands 1,776-feet tall within Daniel Libeskind's masterplan. Beyond providing interesting tidbits of information (did you know that both an 18th century boat and an ice-age formation were found while digging out the building's foundations?), the article, written by Josh Sanburn, is a fascinating and often deeply moving account -- one that gets across the sheer force of will and the extraordinary amount of collaboration it took to raise this building into the atmosphere:

TIME's investment into the story was considerable (and, one can speculate, motivated by a desire to rival the fantastic multimedia features of The New York Times). The site is accompanied by a special issue of TIME, a documentary film, an unprecedented 360-degree interactive photograph, and - come April - even a book. Sanburn was not only granted exclusive access to the project for about a year, but photographer Jonathan Woods is the only journalist to have ascended to the skyscraper's top. Woods, start-up Gigapan, and mechanical engineers worked over eight months to design (on AutoCAD no less) a 13-foot long, rotating jib that could sustain a camera in the harsh conditions at the top of the tower’s 408-ft. spire; over 600 images were then digitally stitched together to create the 360-degree interactive photograph (which you can purchase here. A portion of the proceeds go to the National September 11 Memorial & Museum).

You can explore TIME's interactive at TIME.com/wtc . Click after the break to watch some incredible videos from the project & read some particularly moving quotes from Sanburn's article.

The World Trade Center’s “best-kept secret” has been revealed. As reported by the New York Times, the Port Authority released details on what will be “Liberty Park,” an acre-sized, elevated park lifted 25 feet above Liberty Street on the WTC site. Planned for completion in 2015, the $50 million landscaped terrace will connect the financial district with Battery Park City, while providing a panoramic view of the National September 11 Memorial and serving as a forecourt for the new St. Nicholas Greek Orthodox Church. More information on Liberty Park can be found here. 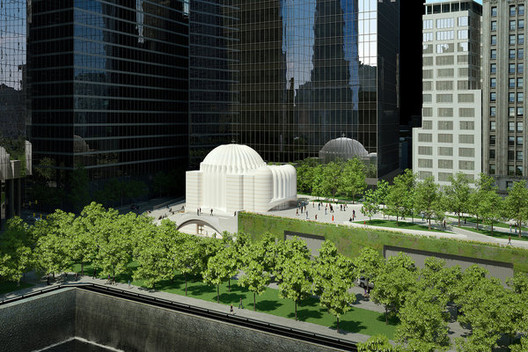 CTBUH Crowns One World Trade as Tallest Building in US

The Council on Tall Buildings and Urban Habitat (CTBUH) has official ruled Skidmore, Owings & Merrill’s One World Trade Center (1WTC) as the tallest building in the United States. The decision comes after a long debate questioned whether or not the tower’s 408 foot spire should count towards its overall height.

As CTBUH explained: “Due to design changes that resulted in the removal of the architectural cladding around the mast at the top of the structure, it became unclear whether the structure was in fact a ‘spire’ – a vertical element that completes the architectural expression of the building and is intended as permanent, or whether it was an antenna – a piece of functional-technical equipment that was subject to change.”

Banksy, the pseudonymous United Kingdom-based graffiti artist who is currently making his rounds in New York City, has proclaimed the One World Trade Center as the city’s “biggest eyesore.” In a brief op-ed piece, Banksy describes the SOM-designed tower as a “shy skyscraper,” one that declares New York’s “glory days” are gone.

“You really need to put up a better building in front of it right away,” stated Banksy. “... because you currently have under construction a one thousand foot tall sign that reads, New York - we lost our nerve.”

Criticism of the One World Trade isn’t new, as many leading critics have bashed its design for being “meh” - a watered-down version of Daniel Libeskind’s original proposal.

Vanity Height: How Much of a Skyscraper is Usable Space?

Ever expanding population growth coupled with the continuous development of urban centres mean that buildings, in general, will continue to get taller. With the topping out of One World Trade Centre in May this year the worldwide competition to construct towers with soaring altitudes doesn’t seem to be slowing, especially in China and the UAE. The question on many people’s lips, however, is how much of these colossal buildings is actual usable space?

Caution: This video may induce vertigo.

As the final segment of the One World Trade Center was hoisted into position – topping the structure out at a patriotic 1,776 feet – Curbed NY captured its journey via a small Go-Pro camera to reveal its fascinating, and somewhat nauseating, view of Manhattan.

While the US rejoices this monumental feat, a debate amongst architects, engineers and city officials lingers on whether or not the 408-foot spire will count towards the One WTC’s overall height and allow it to officially claim its title as the tallest building in the Western Hemisphere. Although the Port Authority argues that the spire doubled as a radio antenna is considered as non-essential telecom equipment and therefore should not be considered as part of the “architectural top”, the Council on Tall Buildings and Urban Habitat will make the final call in October.

One World Trade Center Will Soon Top Out at 1,776 Feet

After weather conditions refused to cooperate on Monday, the final two sections of Freedom Tower have been lifted to the summit of the One World Trade Center. Construction of the gargantuan 758-ton, 408-foot spire - a joint Canadian-U.S. venture - began in December 2012, when 18 separate pieces were shipped to Manhattan from Canada and New Jersey. This final addition, including a steel beacon, means that the height of the building will soon rise from 1,368 feet to a more patriotic 1,776 feet once the segments are permanently installed within the next few weeks. However, it's not yet certain that the building will officially be the tallest in the U.S.

Updated Visuals for One World Trade

Check out these new renderings of One World Trade Center from the Port Authority and the Durst Organization. The images were released to illustrate recent design modifications – such as a treatment for the tower’s first 20 stories and the elimination of the casing around the antenna. These fresh thirteen visuals offer a look at the tower from perspectives taken around the boroughs and New Jersey. While these renderings offer a taste of what can be expected, it is great to physical progress being made and how close we are to a completed tower.